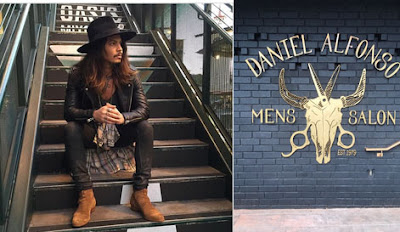 His spacious The 1400 sq. foot stunning space makes for a welcoming addition to the corner of Beverly Boulevard and Gardner Street, where gourmet food shop/cafe Stir Market is located.

A barbershop/salon and a gourmet foodie market? Complete.

Created purely from their own vision, without the help of an interior designer, the duo chose personal, statement-making pieces to create a hip, elegant man-cave environment where industrial goth meets Southwestern Americana.

The design of the space revolves around a majestic American Buffalo head at the entrance of the salon.  A Native American symbol of courage, prosperity, bravery and life, "Tatanka" was the first treasured piece they purchased when they began their journey.

The salon also boasts custom made, 200 year old, custom barber chairs valued at $16k each.  Each chair is unique and adds a traditional quality to the space.  There's also an upscale bar to quench clients' thirst while fixing and styling their hair.
On the walls include art pieces such as The French Bulldog portraits from local artist Kari White, who specializes in pieces themed around her dog, “Mayor B.”  She is also the sister of client and professional snowboarder, Shaun White. 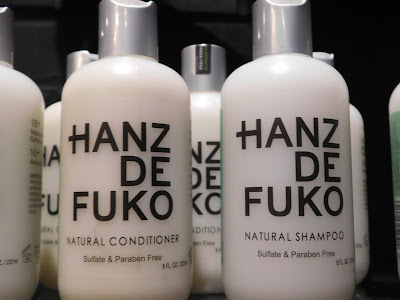 Beyond the cool quarters, the most important aspect for Daniel and Christina was to create a dream team of stylists.  Each member of the staff is highly qualified and meets the exceptional level of standards required to create cutting edge, precise men’s hairstyles. The salon is currently home to two other stylists including Greg Buchl and Sofie Pok.

This scribe asked this very young and very hip hair stylist, why a men's salon when the majority of salons already cater to both genders?

He said, based on his experience with the young gentlemen and their unique shaving needs, this current crop of Young Hollywood gents coming up, need proper cutting on the sides and on the top with extra styling.  He also added that they also need to know a proper shave and trim for their mustaches and beards.

Knowing his generation, his exclusively men's salon will eventually expand to being unisex where both genders can have their strands styled while keeping males' shaving and trimming services maintained. 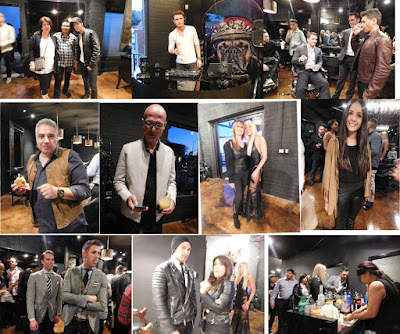 After 20 years in the industry becoming internationally renowned as a leader in his field with Hanz De Fuko's help, all of Young Hollywood celebrities cheered and of course, party-ed at Daniel's salon/barbershop opening for moral support. 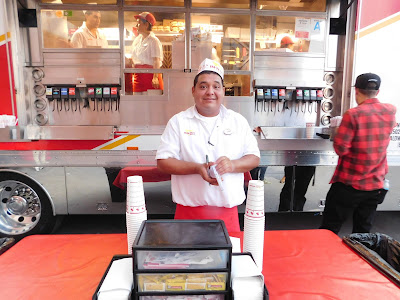 At the suggestion of his buddies, In n Out Burgers catered the opening.  Guests can order any type of burger on the menu, as many as they want with fountains of sodas free-flowing to flush the yummy cocktails out of their system.

Hip, not snotty.  Cool as welcoming.

Hang out at Daniel Alfonso's Men's Salon at 7465 Beverly Boulevard in West Hollywood, CA.
Posted by thearriviste at 2:41 PM