Slide It, Lock It, Pop It, Jouer Cosmetics 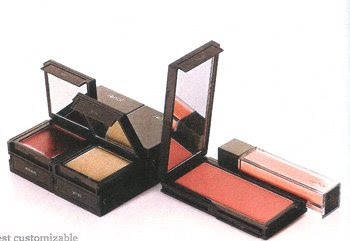 By Laura Medina
There has been a proliferation of stand-alone, convenient makeup of fat, chubby cheek/lip pencils and watery gels in one shade that inevitably gets all jumbled up and lost in the disorganized darkness of a handbag or tote.
What is a busy woman on-the-go, juggling career, kids, gym, and social life, to do?
Philanthropist, movie producer, health fanatic, mother of two, and the founder of Jouer Cosmetics, Christina Zilber faced that exact same dilemma dashing from home, office, gym, and social events while jet-setting between Los Angeles, New York, and Paris.
Frustrated with conventional makeup palettes that offer hundreds of colors when she only wants one or two and tired with digging through her purse for separate pencils and pots, Ms. Zilber took it upon herself to invent a new type of makeup kit is that neat, chic, organized, and travel-friendly that any woman can customized as she goes. 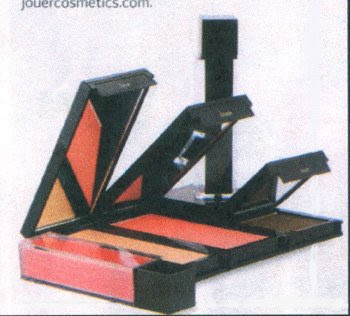 When she found out how fun it is to slide, lock, and pop her individual compacts of multi-tasking tints, crème foundations, concealers, eye shadows, lip glosses, and mascaras off and on for whatever the occasion, Ms. Zilber named her snappy new makeup line, Jouer, French for “play.”

Aptly named, you can customize, simply, and elaborate as the day and night come along. Thanks to her inventive system of interlocking brackets on each compact that slide side-by-side or click back-to-back, you can actually save money and keep your entire makeup kit neat, tidy, and well-coordinated by easily dabbing on a rosy or plum or bronzed lip/cheek tint for daytime then clicking on a lip gloss and mascara for night. 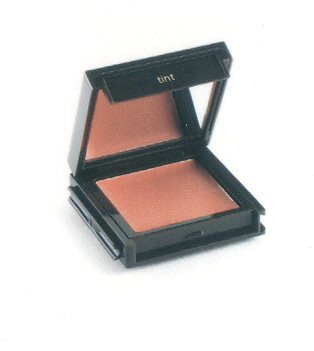 Since each square compact measures a mere one inch and a half, anyone can slip just one compact in her jeans pocket and she is ready to go. 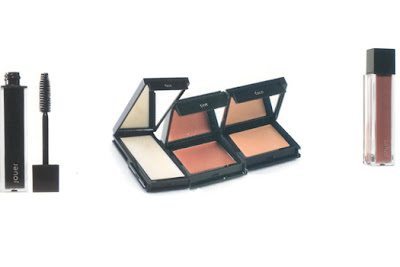 Even for the simplest of days running errands, Ms. Zilber knows women, especially busy moms, still want to look polished leaving the house on the hottest of days. How to look effortless without breaking out in a sweat? Ms. Zilber considerately thought of that when she included Essential Matte Touch, an oil-absorbing face treatment.
Instead of messing around with sticky swats of facial tissues, a swipe of the Matte Touch then a dab on your shiny spots puts an end to that.
There is more to Jouer than interactive compacts you can adjust and blend able makeup in classic shades.
Each and every item is infused with botanical anti-oxidants that soothes and rejuvenates busy, fatigued skin, cheeks, lips, and eye lids.
Jouer Cosmetics is truly the twenty-first century makeup for the modern woman on the go.

Posted by thearriviste at 10:13 AM No comments:

There's more to May than Mother's Day 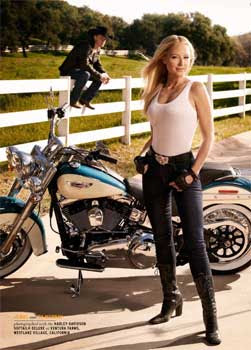 Jewel and her Harley-Davidson with her husband, Ty in the background
By Laura Medina
Since Mother's Day has come and gone and Spoleto USA is arriving soon, the entire month of May is Women Rider Month.
If you pick this month's June issue of Vanity Fair and spot its Agenda section, the magazine and with the cooperation of Harley-Davidson are honoring and supporting free-spirited women who equated independence and freedom to zen and the calming focus of the road.
This is the ideal moment to learn the safety, maneuvering, and the proper equipment and attire for riding your hog.
If you go to www.harley-davidson.com/vfwomen, you will watch and hear testimonies of sexy but strong women like Jewel, Jillian Michaels, Tricia Helfer, and Deborah DiMiceli commenting on the zen of riding, the sense of independence, and revisiting their inner-tomboys yet sharing the camaderie of fellow motorcycle riders.
Jewel adds on Harley-Davidson's American heritage by saying how great it is to live in this country to ride a hog and drive whatever you want and wherever you want.
The company knows you need more and something deeper to reach women than painting a bike pink.
The seductive Tricia Helfer is not much of a girly-girl but she loves her metallic purple Panther Harley.
Now, don't be startled if that girly-girl in white lace you run into Spoleto might be a Harley-Davidson woman.
She can't think of anything easier and sexier than vooming into town on her own customized Harley.
"Every ride is an escape with a sense of freedom found nowhere else, each road trip is an adventure that gives lifelong memorie," Karen Davidson, Harley-Davidson's Creative Director or General Merchandise and co-founder William A. Davidson's great-granddaughter.
With Summer starting up, now is a great time to handle a hog and hit the road.
Posted by thearriviste at 10:38 PM No comments:

A Summer wardrobe that can ease into Fall 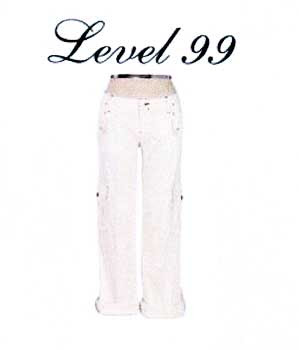 White Cargo Trousers for $88 at Anthropologie.com
By Laura Medina
Sweating out what to wear or how to update your closet then make it last into fall without going broke.
Easy. Just pick one item then use it as a cornerstone for your new wardrobe, as in Level 99 White Cargo Trousers at Anthropologie. At a reasonable, double-digit price of $89, you can easily build a new look from that.
These cargos are prepared to battle the humidity and Summer rain storms.
You can have the option of leaving the hems hanging down, so you can pair them with slingbacks for all those Summer White parties.
When the thunderstorms burst open, there is a tab that holds those rolled up hems while you splash through the puddles without ruining them.
How chic! How practical!
What and how to build upon a pair of cargo jeans?
Don’t worry about wearing something heavy, thick, and bulky. Let start off light. 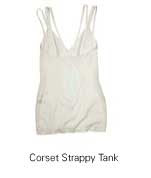 As in an easy Corset Tank from Foley and Corrina then topping it off with their Victorian Ruffle Scarf. 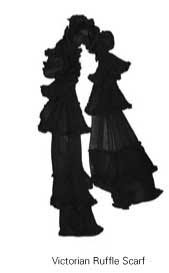 If all that layering sounds too fussy, give their Beaded Tank a try.

If you want that instant Dandyism for a night out or a funky and fun daylight look, slip on Foley and Corrina’s Ribbon Tank with white ribbon bib then pair it with their Drape Ruffle Vest. 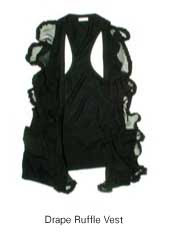 A couple of months later, when early Fall sends its evening chills but the days are still warm, their Sweater Tank keeps you light when it is sunny but cozy when it is dark.

See.
You can start building your autumn closet at the start of summer. By doing this, you can really stretch your clothing budget a long, long way when you pick one garment then go from there.


Posted by thearriviste at 12:55 PM No comments:

A "Fashion Show" you can participate

Hosts and Judges of "The Fashion Show": Kelly Rowland, Isaac Mizrahi, and Fern Malis
By Laura Medina
Somewhere between "Project Runway" and "American Idol," Bravo's last minute replacement for "Project Runway" (which switched to Lifetime and moved from New York to Los Angeles), "The Fashion Show" still retains the basic concept of designers competiting in numerous tasks and markets under the stress of a impending deadline.
Designers still come from all over the United States.
However, this crop of designers have notability they have built over the years.
In fact, three of the fifteen contestants are prominent Los Angeles designers who specialized in the fields of fashion. Accounting for one-fifth of the group, the City of Angels have a strong contingent.
Representing what Hollywood is getting known for, the dapper Goth, Jonny Day of Elmer Ave. is the spokeman of the edgy but elegant street skater punk who appreciates the finer things in life with pedigree-as in bespoken tailored blazers, vests, and button-shirts in lush fabrics with gentleman details. Think of the Hollywood Rock Star moonlighting as a centuries-old but very sexy vampire. The edgy Debonair Punk Aristocrat.
If Jonny Day is the gentleman rocker then women's haute couture designer, Merlin Castell, honors the past and the history of fashion.
With a flair of the dramatic, Mr. Castell resuscitates garments from the distant past then reintreprets them in cutting-edge fabric technology. Think of dreamy Grecian gowns in lyocell and sweat-evaporating Tencel.
The cast of designers-slash-contestants

Rounding out this Los Angeles trio is the functional but no less boring, underwear designer, Andrew Christian.

Thanks to his innovative and comfortable briefs and panties that lift and separate for both women (his WonderWare) and men (Andrew Christian), Mr. Christian has steadily built a loyal fan following since he started twelve years ago.

By partcipating in "The Fashion Show," he wants to use this moment as platform to show he can make a successful transition from men's underwear to mainstream ready-to-wear for women.

Even the general idea is the same as "Project Runway," "The Fashion Show" has its own unique traits.

The contestants have a longer and deeper reputation in their respected towns and fashion niches.

The show will be a real "show." Not an isolated viewing among judges but a full participating audience of real people who will judge who is the best in the end.

Actually, it is much closer to Bravo's hit, "Top Chef." Each episode will start with a mini-challenge set by Harper's Baazar Special Projects Director, Laura Brown.

Instead of Elle Magazine, Harper's Baazar is the show's partner.

Bravo also up the ante in the prizes. Gone are the car and a spread in Elle Magazine. In are a clothing line to be sold in a major retail market and a $125,000 cash prize.

Instead of a few selected industry insider judges, it is the audience-and you, the American viewer, who will pick the winner of the ultimate fashion show.

Now, tune in this Thursday, May 7th at 10pm, to get your feet running in who's going to win "The Fashion Show."

Posted by thearriviste at 2:07 PM No comments: