Good for the Environment, Good for Your Wallet. Loomstate for Target

$16.99 Dolphin Print V Neck Tee and $26.99 Gray Pink Plaid Shorts
By Laura Medina
Earth Day is upon us.
Five nights preceding this, Target celebrated Earth Day by launching an ultra-exclusive sneak peek bash of their Loomstate for Target Line, an earthy-friendly but hip collection of beach-friendly and wallet-easy clothes, all made out of organic cotton.

A galaxy of Hollywood's hottest hotties: "Entourage"s Adrian Grenier, "The House Bunny" Anna Faris, "My Name is Earl" Jaime Pressly, burlesque performer Dita Von Teese, and all-natural supermodels, Amber Valleta, Angela Lindvall and Josie Maran, and actress Debi Mazar, all came out in a quaint location of Venice to personally honor Loomstate's earnest designer, Rogan Gregory and his partner, Scott Mackinlay Hahn, from taking their earthy but cool concept from the rarefied lofts of Barneys a couple of years back to the more down-to-earth and accessible Target's Limited Edition Designers Series.

The stars are really just like us. They, too, appreciate clean-cut, sporty mix-and-match pieces, functional jackets, and cute but cool Summer dresses in wholesome fabrics at reasonable prices.

E!'s "The Daily Ten," came out in full force. Their fashion expert, Amanda Luttrell Garrigus, marvelled over the quality and price. The affable Sal Masekela dropped by the soiree, a little spot of Hollywood in his native neighborhood of Venice.

Basically, stars went crazy for these easy-breezy separates in cute graphics of birds flying in flocks and the soothing shade of teal dominating the collection.

These cute prints and light color in a super-soft prewash for this Summer wardrobe gently remind people to respect the beach, the ocean, and Mother Earth.

Guests wind down from their shopping high at an after-party behind a cute, little red cottage, Big Red Sun, an unassuming boutique transformed into a pop-up Target store. This experimental launch of Loomstate for Target was so burning hot, staff were constantly running back and forth from trucks, loading stacks of tees, jackets, jeans, and tops inside the packed cottage.

You don't have to wait for an invite or be a celebrity to celebrate Earth Day fashion.

April 19th is Earth Day and it is the day Target officially launch their Loomstate Line on their website, http://www.target.com/ and a few selected Target stores.

Hurry up! This rare natural occurrence will last until May 16th.

Posted by thearriviste at 5:45 PM No comments: 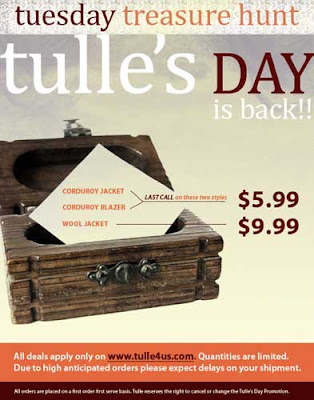 Following in the footsteps of clothing the entire cast of "Gossip Girl," Tulle is going to generously offer certain cuts and styles at the rock bottom prices of $5.99 to $9.99 for ONE DAY only, April 7th!!!!
Now, you really do not have an excuse to dress like a Gossip Girl.
Posted by thearriviste at 5:06 PM No comments: 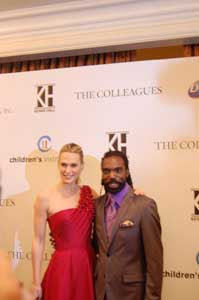 Molly Sims and fashion designer, Kevan Hall
By Laura Medina
To reparaphrase female impersonator, RuPaul, "The era of the bimbo is over."

This statement came just in time for the sleeker, faster, and stronger Fall 2009 Collection by Kevan Hall.

This is a 180 degrees spin from his red carpet-ready gowns and historically-based, demure dresses and separates.

The Fall 2009 show is evenly split between the accessible yet chic ready-to-wear separates for Kevan Hall for Paul Stanley Collection to be sold in Lord and Taylor and Nordstorm, and his own Signature Line.

The fashion show was the highlight of The Colleagues' Twenty-First Annual Spring Luncheon at the Four Seasons Beverly Wilshire Hotel.

A galaxy of stars arrive.

Not only did they show their support for the charity for neglected children and mothers of Los Angeles, they also came to cheer on their favorite designers, Mr. Hall.

Molly Sims modeled a creation especially made for her by Mr. Hall, an off-the-shoulder gown in cranberry, aptly dotted by handsewn freeze-dried cranberries by Mr. Hall and his staff.

Fitting, since Mr. Hall brought in Dial Soap as the benefit luncheon's sponsor. The brand uses this moment to debut their new Cranberry Body Wash. 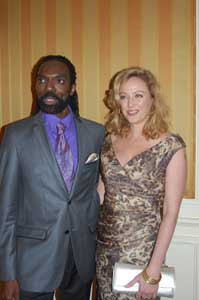 A galaxy of stars attended the luncheon, such as Lisa Rinna, Garcelle Beauvais-Nilon, and Angie Harmon.

Another of Mr. Hall's faithful client, Virginia Madsen, showed up just for him. She is a big fan of his, since she wore one of his gowns to the Oscars as a nominee for the movie, "Sideways." 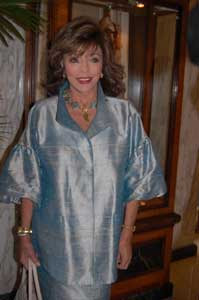 Another star made a last minute appearance for The Colleagues' Charity Luncheon-Joan Collins.

The luncheon in the lavish Beverly Wilshire's Ballroom commenced when an orchestra strung timeless Hollywood song tunes and soundtracks on pitch-fork dual runways.

The unique pitch-fork runway was thoughtfully conceived so the guests, who were spread out all over the grand ballroom, can have a good look at the collection.

Even though dessert is always part of a three-course meal, the real treat was Mr. Hall's debut of his sleek and quick collection.

Once the guests finished their entree, the real dessert was Mr. Hall's catsuit 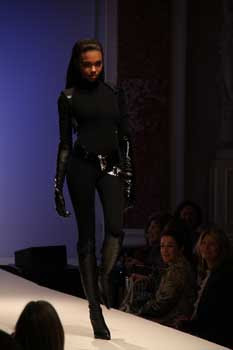 This Emma Peel-inspired outfit set the tone of the show. Playing homage to the Sixities Female Empowerment of "The Avengers'" secret agents and the sexy but whip-smart and sexy James Bond Women.

Mr. Hall signaled the change from the Paris Hilton-induced bimboism to the sensually efficient, no-nonsense heroines of early Sixities Feminism. 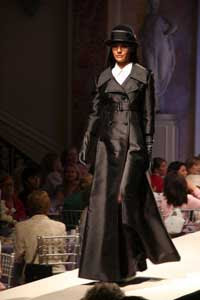 The dual-ended catwalk platform did more than just serve a practical purpose of displaying the line to opposite sides of the ballroom. 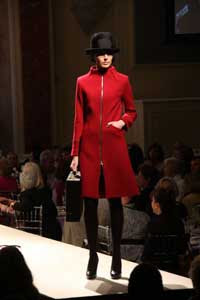 Mr. Hall, during the pre-order reception, cited "The Avengers'" Emma Peel/Diana Riggs as the muse of his Fall Collection. But, he also used the subliminally influential blonde femme fatale, Honor Blackman.

These women both starred as secret agents in "The Avengers" and as Bond Girls.

Ms. Blackman as "The Avengers'" Judo-expert/agent, Catherine Gale and in James Bond's "Goldfinger" as the infamous pilot/cat burglar, Pussy Galore.

As for Mr. Hall's prim and proper coats and suits, Ms. Diana Riggs was also an influence as Countess Tracy di Vicenzo in "On Her Majesty's Secret Service." 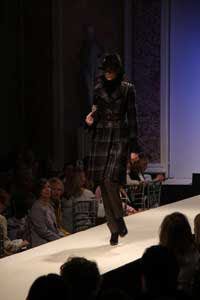 Another James Bond woman made an appearance in Mr. Hall's show, Miss Moneypenny, the secretary to Mr. Bond's supervisor, in ladylike tweeds and sheath dresses.

The ode to Anglomanic showed as in a riding outfit with crop. 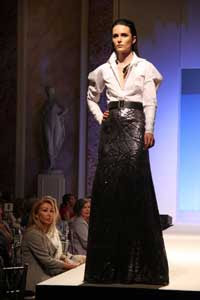 Mr. Hall's core fan base was not forgotten in this simple chic ensemble of blouse with a matelasse skirt.

If you want to a more intimate viewing of this collection, a few of "The Housewives of Atlanta"will trek out to Los Angeles to personal view the collection in Mr. Hall's very own atelier, this week.

The episode will aired during the Fall Season of "The Housewives of Atlanta" on Bravo.

Keep your eyes out for it!


Posted by thearriviste at 11:51 AM No comments:

Now, You Can Dress Like a Gossip Girl-More Affordable Than You Think

Watching "Gossip Girl," have you ever dreamt about assertively strutting around Manhattan's Upper East Side as Blair Waldorf, Park Avenue princess and the twenty-first century's prim and proper queen bee?

Now, you can. Ms. Waldorf's youthful but ladylike chic can be yours for under $100, thanks to the people who actually outfit the cast of "Gossip Girl."

If you go directly to Tulle's site, http://www.tulle4us.com/, you can instantly buy the exact same Navy Patent Trench Coat that Leighton Meester wore earlier this season in the series. 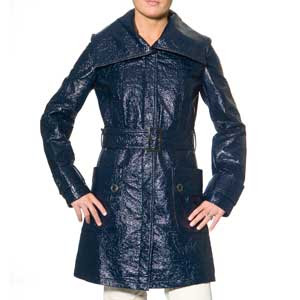 For only $67.80, Ms. Waldorf's look can be yours. Tulle's Patent Trench Coat comes in Navy, such as the one above and what Ms. Meester is wearing in the top photo.

However, it does come in deep crimson red for that retro Seventies style and classic black for that sleek European look.

Since, it comes under $100, you can afford three different looks with each different coat in all three colors.

Don't worry if you prefer to stick to one coat for now. Each trench coat is a wardrobe investment in its own right. 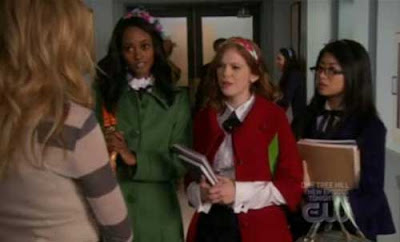 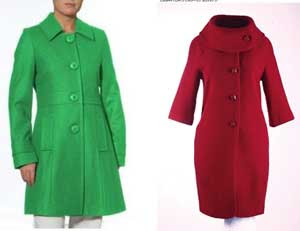 In that scene, on the left, Izzy (played by Nicole Fiscella) wears Tulle's vintage wool coat in Basil for $96.00.
To the right of her, Hazel (played by Dreama Walker) is clad in Tulle's soft wool tapered coat in Ruby, currently retailing for $77.50.
You don't have to pretend you can only be a "Gossip Girl" during the day and outside, or in Winter and Fall. You can be a complete "Gossip Girl" during the evening and inside, even during your off-hours, such as cast member, Nicole Fiscella, in Foley and Corrina, another brand outfitting the prime time series. 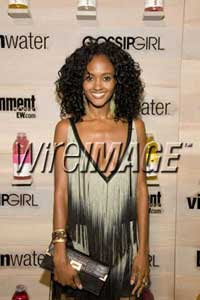 If Foley and Corrina's Ombre Fringe Swing Dress can help Ms. Fiscella wow them on the red carpet and in the television series as Izzy, then they can make you a knock-out on a date or on a girls night out.

See, you don't have to spend an arm and a leg on actual high-end, established couture to look like a Park Avenue princess.

The fashion from "Gossip Girl" is actually attainable and most importantly, affordable.

Soon, you can be a Gossip Girl year around, fooling people that you spend a fortune on your impeccable wardrobe when, in actuality, you saved tons of money.

Now, this is Classic Chic.

Posted by thearriviste at 9:46 AM No comments: