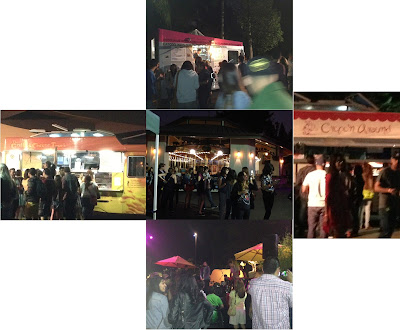 On the third and last night of LA Zoo's "Roaring Nights," the zoo's three-parts carnival-meets-zoo that runs every Thursday night for the past three weeks, was a nice break from the usual seen-and-be-seen scene for Los Angeles' culturati, faded by dive bars, superficial night clubs, and jaded glamorized industry parties.

This "thinking out of the box" concept was a great breather from the blase scenster scene.

Not saying this is clean, wholesome fun for the kiddies.  In conjunction with KCRW, this 18 years old and up night-time only event had beer and wine bars dotting the landscape; and well-known gourmet food trucks, such as the Grilled Cheese Truck, Coolhaus, Komodo Truck, and Crepe'n Around catered to grown-up palates, beyond the juvenile fare of hot dogs, burgers, and soda.  For every hundred feet, there is a food truck fueling party animals, the big adult human kind.

To further prove this wasn't a kiddie affair, the LA Zoo's "Roaring Night" has proven to be a romantic hit among pairs of couples who evolved from the city's usual single-bar jungle scene.

With even more adult fare of emerging indie-rock bands hand-picked by KCRW and blue-note comedians training under the edgy tutelage of the Improv Comedy Troupe, "Roaring Nights" is for "big kids," not for tots.

Normally, most human beings have little kids' heart, so guests got a kick riding the lighted, blinking carousel rocking to DJ Morningstar, who got the after-hours carnival throbbing with beats.

The band, No, hit the stage, directly in front of the Elephant exhibit, party-ing pachyderms. The koalas in the Australia section were also party animals, along with the perpetually chic black-necked swans.  Hollywood "snakes" mingled with real reptilians at the Lizard Lair.  The adult kids and the lovey-dovey couples love browsing and photographing the party animals grooving to the tunes.  Mind you, the exhibits opened at night were the animals okay with night-time activities.  The furry, big cats were asleep and their enclosure were blocked off and guarded by security and zoo staff.

Alias, this recent past Thursday night the 25th was the closing night of this night-time series. One can only hope LA Zoo's "Roaring Nights" carnival will return next year.  A hipster can wish.