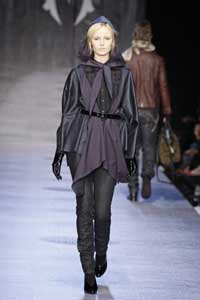 Monarchy Deconstructed Black Leather Cape
Now that the holly jolly holidays had came then passed, it is time for some serious clothes, not dowdy clothes.
Want a new wardrobe stocked full of clothes you never seen or had before?
Sick to your gills with All-American Preppy this and Prim & Proper Brit Preppy that?
Are you bleeding khakis and need some hip but classic jeans to wear?
We are discussing about a functional wardrobe that is equally elegant as it is practical. Less sporty, more luxurious yet durable enough to withstand any recession which metamorphes into a closet classic. 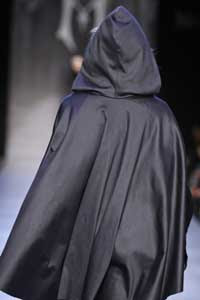 The back view of Monarchy Black Leather Deconstructed Cape with Hood
Monarchy's Eric Kim insistence on quality fabrication and construction, which he developed at Fashion Institute of Design and Merchandising, is what makes him stand out in a new, emerging market of "Urban Couture." It does not hurt his original career choice were furniture designer and architecture, which explains his attention to fabrication, finishes, and tailoring.
Christian Audigier maybe the king of "Urban Couture," but Mr. Kim is growing a loyal fan among influential press and media people who can actually pick who is the leader in a particular field.
Fashion insiders, such as fashion photographers literally love his tee shirts to death, until they wear holes into them-and that says a lot.
Mind you, Mr. Kim does not play the popularity game with the masses. However, he is steadily earning respect for focusing on classic but edgy tailoring in timeless yet comfortable textiles and details that are fad resistant. 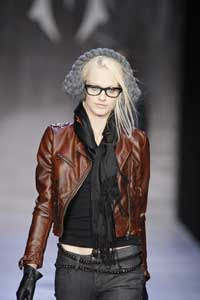 He concentrates on reintrepreting wardrobe classics and renovating real all-natural knits and leathers in innovative finishes and polish.

By putting all those technological alterations together, Mr. Kim brings forth a new collection of clothes that have rarely been done before, a new league of causal but sleek attire in weather-protective finishes, a much luxurious choice compare to the more utilitarian North Face. 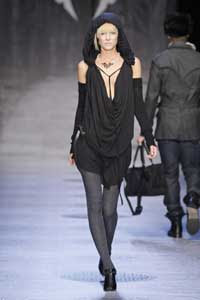 Mr. Kim takes the staid little black dress then rebuilt it into a soft but slinky number that is easy to wear and take care of in jersey knit. 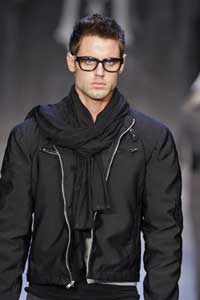 His true love are sport cars and motorcycles-and the accompanying wardrobe and accessories.

In fact, his Director of Operations, his wife, Vivian Lee, met over their mutual love of Porches.

As a sports car and motorcycle enthusiast, Mr. Kim's passion brought him together fellow motorhead, Henry Kim (no relations), his business partner. 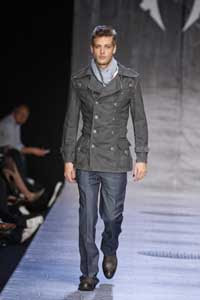 No wonder, with this triad of automative fans, Mr. Eric Kim has this laser beam-focus on reworking All-American classics, such as the motorcycle jacket and flight jacket which came from the engineering world. 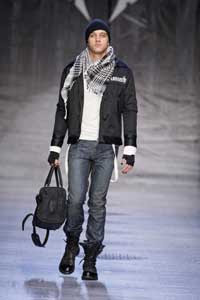 With a hard-core of team of sportscar and motorcycle fanatics at the helm, Monarchy, as a company, is more interested in being an American alterative to Italy's modern, sexy, and luxury causal sportswear titans of Diesel (who also reworks American classics, no different from Mr. Audigier), Miss Sixty, and G Star.

This puts them in a different league, set away from the typical preppy American mall brands, lauching them on the path of premium denim and high-end streetwear, long dominated by Italian brands. 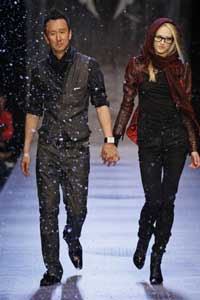 As of now, Monarchy is determined to be in a head-on collision course with Diesel and Miss Sixty, selling at Nordstorm, Bloomingdales, and Saks Fifth Avenue.

Mr. Eric Kim, as we know, is the only true blue American designer refreshing the American heritage of the automobile and the motorcycle.

Never worry if you cannot handle a Harley, you make his tan motorcycle jackets and coats your everyday wear and people will think you're smart.

Remember, Mr. Kim meant his clothes to be classics, trends.

Posted by thearriviste at 12:12 PM No comments: 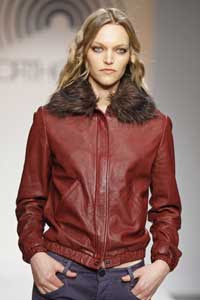 Orthodox Burgundy Fur Collar Bomber Jacket
To paraphase "Full Frontal Fashion TV's" host, James Aguiar, Orthodox is LA clothes for New Yorkers.
To be more accurate, they are real clothes for real women and men. Futuristic touches, such as belt buckles with precise Princess-Line tailoring, offers a refreshing but classic take on sensuality.
An unisex or an androgynous relief from the overtly girly-girly sexiness that had been pounded into everybody's head since Paris Hilton hit the scene seven years ago.
As Orthodox's founder, Eric Niccoli, sense the average woman,-and man, is suffering from a saccharine overload of baby pastels and babydoll tops and cheap chiffon in tacky fabrics. 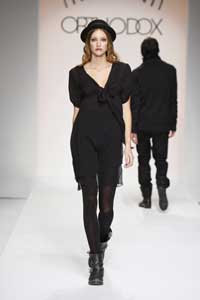 Orthodox Abbey Dress
When women customers asked for a more fitted, more female figure-friendly cuts of his menswear line, he knew there's potential for a cleaner, more tailored womenswear line.
Mr. Niccoli finds filling a woman's unique wants and needs challenging yet fun, such as the issues of everyday wear ease, presented here in a sophisicated but romantically flowing Abbey Dress with a generous empire waist. He unconsciously created a "Boyfriend/Brother Wardrobe" for women to borrow.

With the military stylings of strict tailoring and strategic zippers and buckle placements, the Belt Buckle Sweater, above, can be worn alone as a very femme fatale sexy sweater dress with dark hosiery and a black, high-heel, knee-high boots. 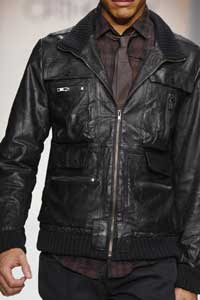 As Creative Director/Designer, Mr. Niccoli sucked the puffiness out of the bomber jacket then tuck it into a leaner safari-like jacket then polished it up with functional zippered welted pockets, neatly placed on the torso.

This "Motorcycle Chic" taken to a new level. Replacing the staid blazer with this mean and lean bomber, giving men, not a macho attitude, but a mature yet industrial savviness.

Something that an uber New Yorker, as in James Aguiar, can wear scooting between Manhattan and Paris. 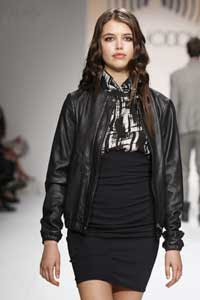 For the intelligentsia set or clique, Mr. Niccoli used Abstract Expressionist, Franz Kline's "action brush strokes" as New Wavish patterns for this blouse and a dress. 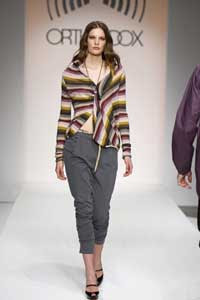 Not of Orthodox is dipped in moody, inky colors or restricted to strict tailoring.

Remembering how actual women live or want to live, here is this warm weather-friendly wrap sweater in season-less rainbow stripes. 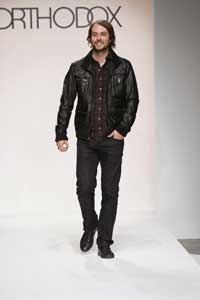 The man, himself, the Creative Director/Designer, Eric Niccoli

Starting out with a simple agenda, designing classic, not staid, clothes that are fashionable, not faddish, Eric Niccoli unexpectedly constructed a subtly sensual clothing line where women still want to dress like women, not little girls; and where men want to dress like men for the twentieth-first century, not their grandfathers.

He surprisingly outfitted a new generation of a Bloomsbury Group for the new century.

By Laura Medina
The new stylings for the new year is a jambalaya mix of nineteenth-century undergarments sliced through with "Blade Runner" New Wave bobs and makeup. 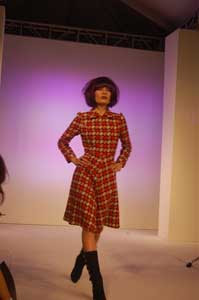 If you can pick and choose among the era-mixing collection, you can quickly find something you can right now, like this checkered coat.

The New Year rocks out in glamorous Lurex leggings or... 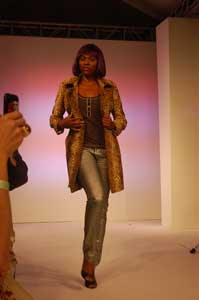 the more fashion-forward Lurex-infused denim that are popping in twill and other wovens. This is the subversive trend of the upcoming year-subtle, shimmering fabrics in, loud baubles out.

For a night out, you can rock the metallic leggings or denim by pairing them with a faux-fur jacket or a Mid-Sixties Mod Edwardian Coat in black velvet.
Both can be had at an accessible. You either hunt them down at a vintage or consignment boutique or hit your local tween/teen store at the mall. Knock-offs are wonderful! An more elusive trend is Victorian underpinnings or foundation lingerie in creamy linen.
This is the new "underwear as outerwear," a modest one but with more versatility. This can make your office outfit more feminine which can be stretch out for a demure religious service look or a romantic but just as chic Summer cover-up. 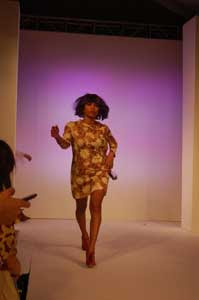 Bohemia blossoms out in big floral Maxi prints. Less Hippy, more Bloomsbury Group, a collection of proto-hippies rebelling against the restrains of Victorian values at the turn of the century than Fifities' Eisenhower's values. 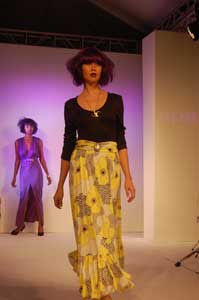 Welcome the New Year and the arriving Spring then the eventually Autumn in Bloomsbury's softer silhoutte and knits, bursting in flowers with deep intellectual romanticism.

Posted by thearriviste at 11:03 AM No comments: