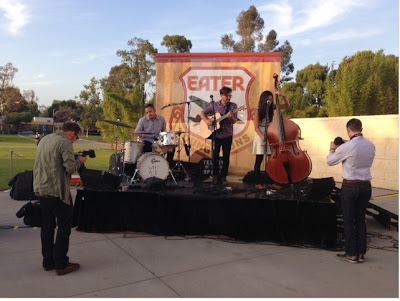 The two weeks before July the 4th, Los Angeles' Foodie & Booze Season was officially kick-started by Eater's Young Guns 2013 Showcase at Los Angeles County Museum of Art's open, central courtyard, conveniently right in front of Ray's & Stark's, the museum's haute restaurant and a couple of it's chefs were the star chefs that two.  Two chefs representing one restaurant in a food festival,..that's not bad!

As the showcase suggested, Young Guns foodie fest targets the emerging cultured foodies between mid-twenties to mid-forties but anyone of legal drinking age can sip and savor for this two fest.

Indie-folk trio, "Yellow Red Sparks," was one of the main entertainments, along side Bombay Sapphire Gin & Tonic and artisan beers.  One of the "Summer Suck Downs" (this Summer's easiest and most popular quaff) was Bombay Sapphire Gin's Raspberry Collins where the bartenders mix muddled raspberries (Los Angelenos are drowning in a fruit bounty) with gin, lime juice, and lime/lemon soda.  That Raspberry Collins stand had the longest line for two nights straight! 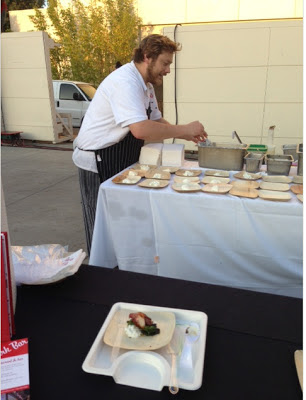 Yet, the big hits among the munchers were from LACMA's Ray's & Stark's chef, Kris Morningstar.  Based on two nights of sipping while standing in a long line, his caramelized pork belly on Sunday night then his perfectly grilled octopus on Monday were not only hits but one was a feat unto itself.

Yes, his caramelized pork belly had the normally kosher crowd devouring it on a Sunday night but making pork fat and skin into semi-candy and snack-that's easy.

But, barbequing octopus tentacle had the high-heeled festival foodies on their feet.  Everyone was really taken back that something they normally associated with being tough, rubbery, and inky can be crispy on the outside, perfectly white like chicken inside, and the meat, moist and tender.

Not everyone, much less most chefs, can grill and cook octopus perfectly but Kris Morningstar did, sans the bells and whistles and the molecular magic tricks. 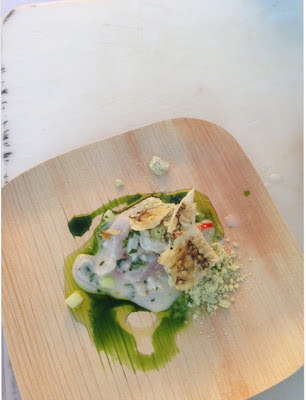 Truth to be told, that Sunday night when this showcase started, was also the official start of Summer in Los Angeles.  The more popular dishes were light, refreshing yet filling (thank god they were enough to soak up the yummy booze) and seafood-based.  These chefs judiciously used the liquid nitrogen (the molecular gastronomy stand-by) to enhance the main ingredients of lemon-soaked fish crudo by making the side dish of rich into crispies and fish skin puffy and crunchy.

Of course being LA, folks seek out the spicy beef trend in Jason Wang of Xi'an Famous Foods' red-hot Korean lamb burgers (straight out of New York) and Ryan Lachaine of Underbelly's spicy and fancy Kobe beef "Sloppy Joes" done "Zone-style", lettuce wrap instead of in a bun.

This scribe might add that lamb burgers are pretty "haute" right now.  They're a limited-edition hit at Burger Lounge right now. 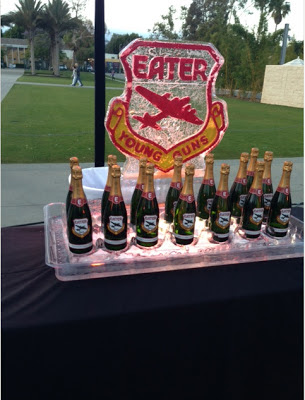 Since the target audience is the emerging Gen-Y and Gen-X foodies, Kettle Chips debuted new flavors and beer and wine pairings with their artisan potato chips for a more enlighten snacking.

Still, the best champagne was reserved as rewards, not awards, for those Young Gun chefs who traveled from all over the country to be rewarded. 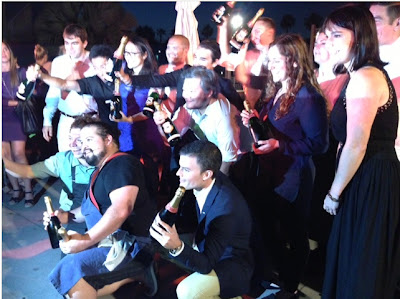 Here they are, say "Hello" to the rising generation of taste-makers, Eater's Young Guns 2013.  After slaving over cookers in two hot days and nights, these guns deserve their own swig.

One of the "Young Guns" crack open his champagne bottle and started spraying people in a "golden shower," shocking one and lone Charlestonian, Brooks Rietz from "The Ordinary." 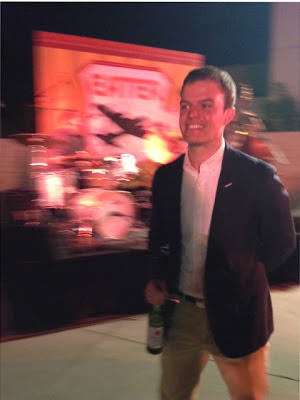 Being the Southern Young Gentleman, Brooks...the Charlestonian...was over-whelmed by "Southern Californian" hospitiality or the "love" he received here.

He can't believe that the City of Angels has its own die-hard core of foodies as such as Charleston.

Let's have a toast to this creative and impressive of class of Eater's Young Guns 2013.

Guess, this scribe has to reserve the appetite for the next class, next year.

However, let's the munching and slurping begin!

Next up...LuckyRice Festival LA, 2013 Edition, back in Culver City but in the bigger and yummier Book Bindery on Saturday, July 27th.
Posted by thearriviste at 11:48 AM