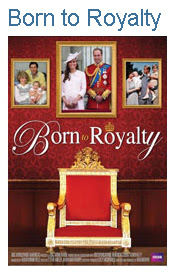 Released in very selected movie theaters this past Friday, July 19th, in anticipation of the royal birth, BBC America released this very special and rare treat, a in-depth documentary on raising a royal baby and the responsibilities that comes with the perks of being royal.

Narrated by Hugh Bonneville (the fictional  Robert Crawley of "Downton Abbey") and and featuring interviews with experts including internationally acclaimed author Ingrid Seward (Royal Biographer and Editor of Majesty Magazine), Ken Wharfe (Princess Diana’s Bodyguard), and veteran Royal correspondent Jennie Bond, this documentary takes you behind the palace gates to tell the realities of being "born royal."

From stories of Royal delivery rooms, nurseries, playtime and schooling to tales of the Royals themselves as babies, mischievous toddlers, students and dutiful members of the Armed Forces, this film sheds fresh light on what life was like – and what life could be like - for the latest child Born to Royalty.

Enjoy rarely-seen archive footage and family photographs taken by former Royal Photographer Jayne Fincher, intertwining both grand images and more intimate glimpses of their lives together. The documentary offers a look at Queen Elizabeth II, her parents and grandparents, and her own heirs, from Charles (and his marriage to Diana) through young Princes Harry and William and beyond.

The film explores the changing way that Royals have dealt with their own children, becoming more hands-on through the generations and the staff that were closest to the family. It also looks at what it means to enter this rarefied world from the outside, starting with Princess Diana and more recently the Duchess of Cambridge, Catherine Middleton. Featuring contributions from those close to the Royal Family, former employees, historians and Royal observers and photographers, Born to Royalty examines what it means to be raised in the aristocracy.

Posted by thearriviste at 10:59 AM