Through the centuries, from Queen Mary (when the cocoa bean was first discovered then imported into Europe) to Queen Victoria to today's reigning monarch, Queen Elizabeth the Second, other than that they're all in the British Royal Family, they're all chocoholics.

As a special treat from Britweek, this year, they invited Queen Elizabeth's and Princess Diana's former chef, Darren McGrady to share his recipes of their favorite desserts and dish so, you can share them with your own queen, mom, on Mother's Day.

According to Chef McGrady, the Queen only eats the highest quality dark and semi-dark chocolate, which is pretty darn healthy with all those flavonoids.

The only royal gossip you'll get from McGrady is the juicy tidbits in the differences between how the Queen and Princess Diana eat.

The Queen, always a classic, eats more currently of today.  According to McGrady, she eats real full-fat versions of meals, dishes, and desserts yet is very disciplined in portion-control, only eats in-season, and hates to throw waste away.

The way she deals with her sweet tooth is that the servant neatly and deftly slice the cakes into a slice, one slice.

She slowly chew her bites then sends the cake back to the kitchen where the staff can eat the rest of the cake.

One time, Chef Darren tried to sneak some frozen fruit in January.  The Queen caught that then a polite but disagreeable note by crossing out the frozen fruit item on his royal menu.

She is a creature of habit.  The Queen's birthday cake is always one of the same two chocolate cakes she always has every afternoon for afternoon tea, Double Chocolate Sponge Cake on normal days, then it becomes the Queen Elizabeth II Birthday Chocolate Cake, with "Happy Birthday" piped in white icing.

During a rare dessert luncheon at the British Consulate, during Britweek, this scribe was fortunate enough to dig into the moist and rich ultra-dark chocolate cake then was pleasantly surprised by the pure chocolate yet sugar-less buttercream frosting.

Having tea with his granny, the Queen, every Sunday afternoon at 4pm, having Chocolate Biscuit Cake with her, grew onto Prince William, that he picked it as his Groom's Cake.
After devouring the Queen's Double Chocolate Cake, this scribe realized Chocolate Biscuit Cake is nothing more than one big, huge chocolate truffle candy, huge enough to slice.
So candy-like, that it's best to eat by hand because piercing it with a fork crumbles it.
For those who hate to cook and bake, this decadent chocolate candy cake is an easy, no-bake cake. 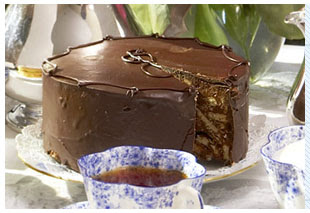 Chocolate Biscuit Cake, Prince William's Groom Cake recipe.
Servings: Makes one 6-inch round cake (8 portions)
Ingredients
Cake
Coating and Decorating
Directions
To make cake: Lightly grease a 6" x 2 1/2" cake ring and place on a tray on a sheet of parchment paper.
Break each of the biscuits into almond-size pieces by hand and set aside.
Cream the butter and sugar in a bowl until the mixture starts to lighten.
Melt the 4 ounces of dark chocolate and add to the butter mixture while constantly stirring.
Beat the egg into the mixture.
Fold in the biscuit pieces until they are all coated with the chocolate mixture.
Spoon the mixture into the prepared cake ring. Try to fill all of the gaps on the bottom of the ring because this will be the top when it is unmolded.
Chill the cake in the refrigerator for at least 3 hours.
To coat and decorate: Remove the cake from the refrigerator and let it stand while you melt the 8 ounces of dark chocolate.
Slide the ring off the cake and turn it upside down onto a cake wire.
Pour the melted chocolate over the cake and smooth the top and sides using a palette knife.
Allow the chocolate to set at room temperature.
Carefully run a knife around the bottom of the cake where the chocolate has stuck to the cake wire and lift it onto a tea plate.
Melt the remaining 1 ounce of chocolate and use to decorate the top of the cake.
Read more: http://www.oprah.com/food/chocolate-biscuit-cake-recipe#ixzz47uRov3nl
Of course, being both Queen Elizabeth's and Princess Diana's chef, people are hungry to get the dish from Chef Darren McGrady's royal tidbits.

Remember, Diana was a product of her times, the Eighties and the Nineties, where everything was fat-free and exercising for exterior physical appearances.

Once he moved on over to Diana, after her divorce, the only guideline he got from her, post-divorce, "Darren, I take care of the carbs at the gym.  You take care of the fat in the kitchen."  It was her way of telling Darren to make her favorite classic British dishes fat-free.  In return aghast, Darren retorted, "How am I gonna do that?!" Diana, "You'll find a way." and he did.

While the Queen insist on full-fat in dainty bites, Diana dives full-portion into the fat-free version.

He joked how Oprah had the full-fat Queen version while Diana dines on the fat-free dish.

This delicate, subtle tomato mousse was often served at state banquets. It became a favorite of Princess Diana’s.  She loved it served alongside steamed lobster and had Darren create a fat free version which she would enjoy while her guests would be eating the original version which was full of fat.

Here's the dish the full-fat Oprah and the Queen version then the fat-free Diana version, 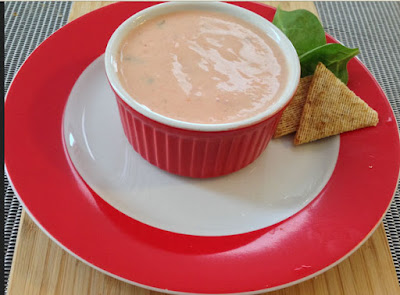 Blend the tomatoes with 1/4 of the peeled onion until you have a fine pulp. Strain the pulp through a conical strainer and into a large bowl. Lightly fold in the mayonnaise, sour cream, heavy cream and tomato puree into the sieved tomato pulp. Then add a pinch of salt and pepper and the finely chopped dill and fold into the mix.

Add the gelatin to a small pan and "sponge" with the juice from half of the lemon. Melt the gelatin over a low heat until it dissolves and then pour it onto the tomato mix, stirring it into the mix as you pour. Test the mix for seasoning and add salt and pepper to taste.

Pour the mixture into individual ramekins, molds or mini-savarin rings and refrigerate for at least 1 hour.

Just before serving, run a small knife around the edge of the mold and turn out the mousse onto a plate.

Decorate the mousse with the split lobster tails tossed in the olive oil, remaining lemon juice and chopped chives on a bed of watercress.

Then, here's the Princess Diana's fat-free version of Chilled Tomato And Dill Mousse With Lobster Tail... 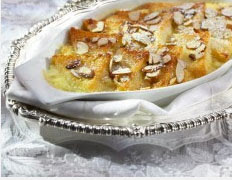 Again, this scribe was lucky enough to scoop this ultra-decadent version of a French Toast during Chef Darren's Britweek Dessert Luncheon.

It was topped and appeared like French Toast on top but then, it's a rich layer of creme burlee custard.  It's like creme burlee topped with French Toast then sprinkled powdered sugar.  Diana's favorite dessert makes for one heck of a breakfast.

Chef Darren,..
"I remember Princess Diana saying on more than one occasion “Darren, you make the best Bread and Butter pudding in the World” I am not sure that I do, but it was as much a thrill when she told Nigel Dempster,( the Royal Reporter of the Daily Mail in London) the same and he printed it in his column. I have to admit though that this dessert is the one I am asked to “bring to parties” the most when visiting friends."

Soak the raisins the night before in the Amaretto and cover with cling film. Leave at room temperature.
1)   Preheat the oven to 350degrees.
2)   Grease a 3 pint dish with butter.
3)   Remove the crusts and butter the bread.
4)   Whisk the egg yolks and the 6 oz caster suger in a bowl together.
5)   Split the vanilla pod and put in a pan with the milk and cream, then bring to a simmer and pour onto the egg yolks, stirring all the time.
6)   Remove the vanilla pod, scraping the seeds into the custard and discard the pod.
7)   Cut a quarter of the bread into 1/2 inch cubes and place in the bottom of the dish. Then top with the raisins adding the juices too. Finish with the remaining bread cut into triangles and arranged on top of the fruit.
8)   Pour the warm egg mixture over the bread making sure all of the bread is coated.
9)   Leave to soak into the bread for 20 minutes.
10) Place in the oven in a roasting tray 3/4 full of hot water. Cook for about 30 minutes. It will only set like custard because of using egg yolks and no whites.
11) Remove from the oven and roasting tray and sprinkle with the extra sugar. Then put under the grill until the sugar starts to caramelize.
12) Sprinkle with the toasted flaked Almonds and dust with icing sugar.
13) The pudding is now ready to serve. I usually serve it just warm with homemade cinnamon or lavender ice cream and a compote of berries – and lots of heavy cream of course.

Since Summer is around the corner after Mother's Day and ripe berries are bursting, this scribe want to share another Chef Darren McGrady's royal dessert...in season of course.

Prepare the fruit by pitting and halving the cherries, removing stems from the red and black currants, and hulling and quartering the strawberries. Keep each type of fruit separate at this stage.

In a heavy-bottomed pan, add the cherries, water, vanilla paste and sugar over a low heat, and stir until the sugar dissolves. Let the cherries simmer until they start to soften. Add the strawberries and blackberries and stir, simmer 2 to 3 minutes and then add the blueberries, red currants, black currants and finally, the raspberries. Remove from the heat, and carefully strain the fruit into a colander, reserving the poaching syrup in a separate bowl.
Cut the crusts off the bread and cut a circle from 1 slice of the bread to fit the bottom of the pudding mold. Dip the bread into the poaching syrup and place it in a 1-quart pudding mold or souffle dish. Cut all but 2 of the remaining 7 bread slices in half, dip them into the syrup and line the sides of the basin, overlapping each piece slightly.

Once the mold is completely lined, spoon the fruit into the center and fill the basin to the top. Place the 2 remaining pieces of bread on top of the fruit. Place a saucer that fits snugly inside the mold on top of the bread. Weigh down the top of the pudding by placing something like a large can of tomatoes on top of the sauce. Refrigerate 6 to 8 hours or overnight, along with any remaining poaching syrup.

Run a spatula around the edges of the pudding, and invert it onto a serving plate. Pour the remaining syrup over the top, and allow the syrup to run down the sides. Garnish with sprigs of mint and serve with clotted cream.

Prince Charles was organic before it was fashionable. He would bring vegetables from his garden for the chef to cook. Charles' dad, Prince Philip would say, "What's the hell is this?!"

The Queen was raised by Victorian nannies. Like Queen Victoria, Queen Elizabeth does not onions, garlic, or olives. She does not eat Italian...

The Royal Family loves lobster anything.

Prince William & Harry are like American kids, burgers and pizza.

Nothing goes to waste. The staff finishes the rest.

Chef Darren used to just call up Harrod's for rhubarb & salmon then he'll had his pick.

When he first moved to Dallas, they only had beef filet and potatoes because it's cattle country. Now, they have salmon & rhubarb.

The Queen is no fan of aromatic or spice. Pure clean surf & turf


Posted by thearriviste at 2:12 PM