Yes, Virgina.  Hollywood does celebrate Christmas.  Hey, anything sparkling and glittering and draped in tinsel is good enough for Hollywood.  When the holidays arrive, Hollywood goes all out.

There were not one but two Christmas/Holiday Tree Lightings at Universal Studios Hollywood.

They happened within one week of each other. 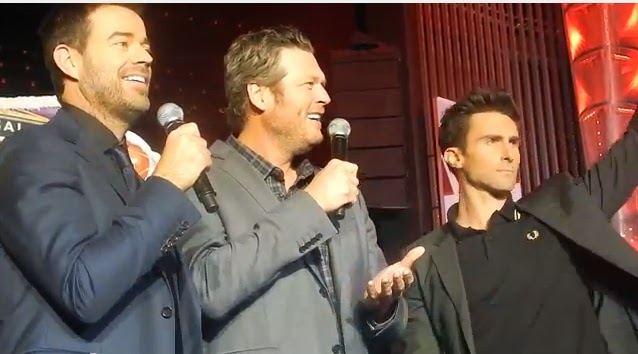 The first one was spectacular enough...when Carson Daly, Adam Levine, and Blake Shelton with Santa Clause light the Christmas Tree in the middle of Universal Studios Hollywood's 5 Towers in CityWalk.

At the Christmas Tree Lighting, Carson Daly asked Adam and Blake if they have any plans for the New Year.

Adam said he and Maroon 5 will be on tour for next year.  Blake said he'll be doing nothing.

Don't worry, they'll still be connected with "The Voice."

As a treat to all the loyal fans,  all ten "Voice" contestants did a special "The Voice" concert where each one of the contestants performed a single set.  With a total of ten contestants, the concert lasted two hours.

Folks were just satisfied with that but no.  That's not enough; and that's not all. 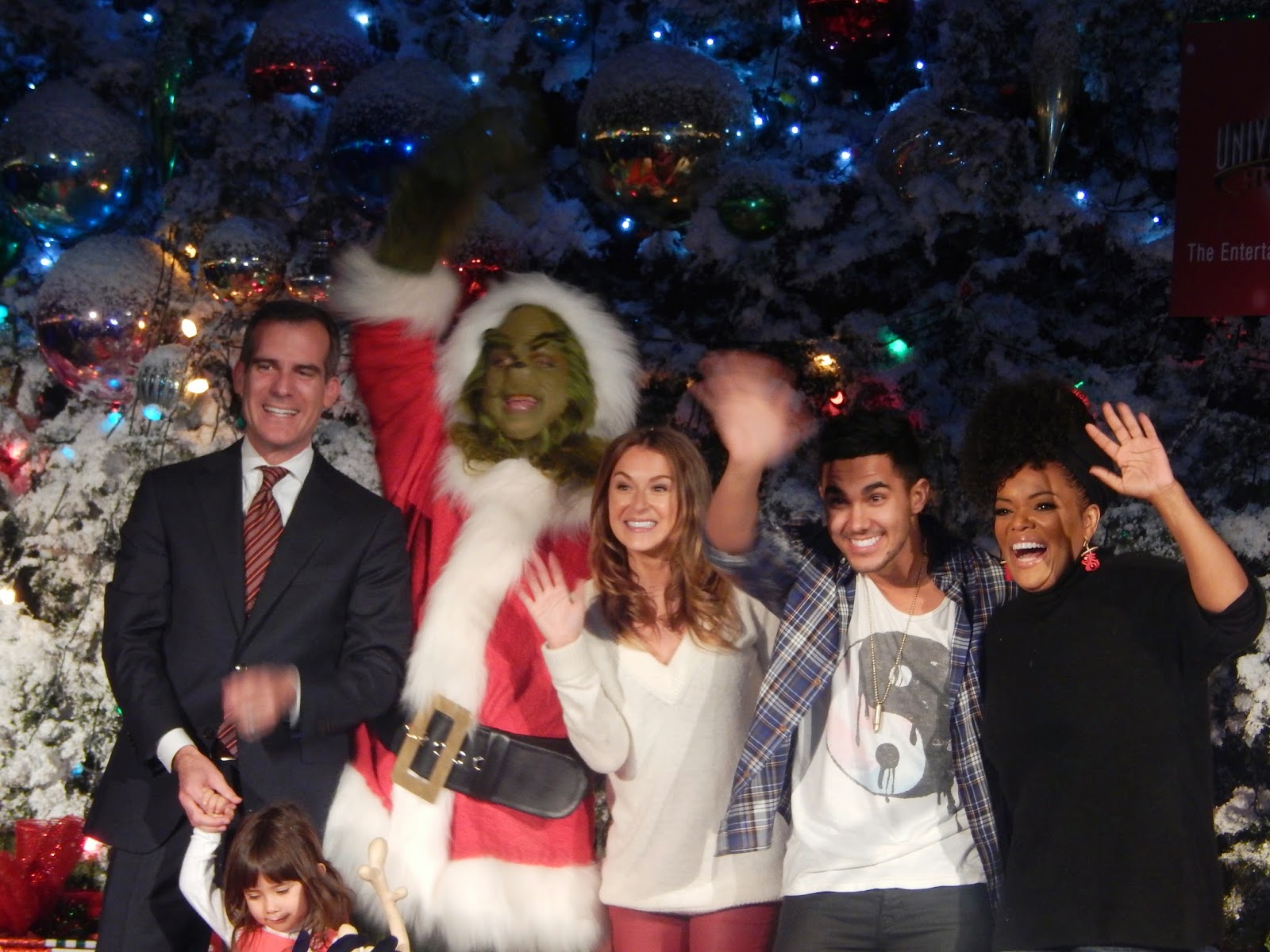 Universal Studios Hollywood had another tree up its sleeve.

A week later, in the middle of the theme park, is the Whoville Village, where they set up an uniquely American yet "universal" holiday, "Grinchmas," for those whose holidays don't always turn perfectly.  It's Christmas for everyone, regardless of cred or color or religion.  Just like the whimsically crooked Christmas tree,  Grinchmas is for the misfits, the outliers, and quirks and the normal folks whose holidays don't turn out storybook perfect but they make the effort of whatever they have then make it specially their own. 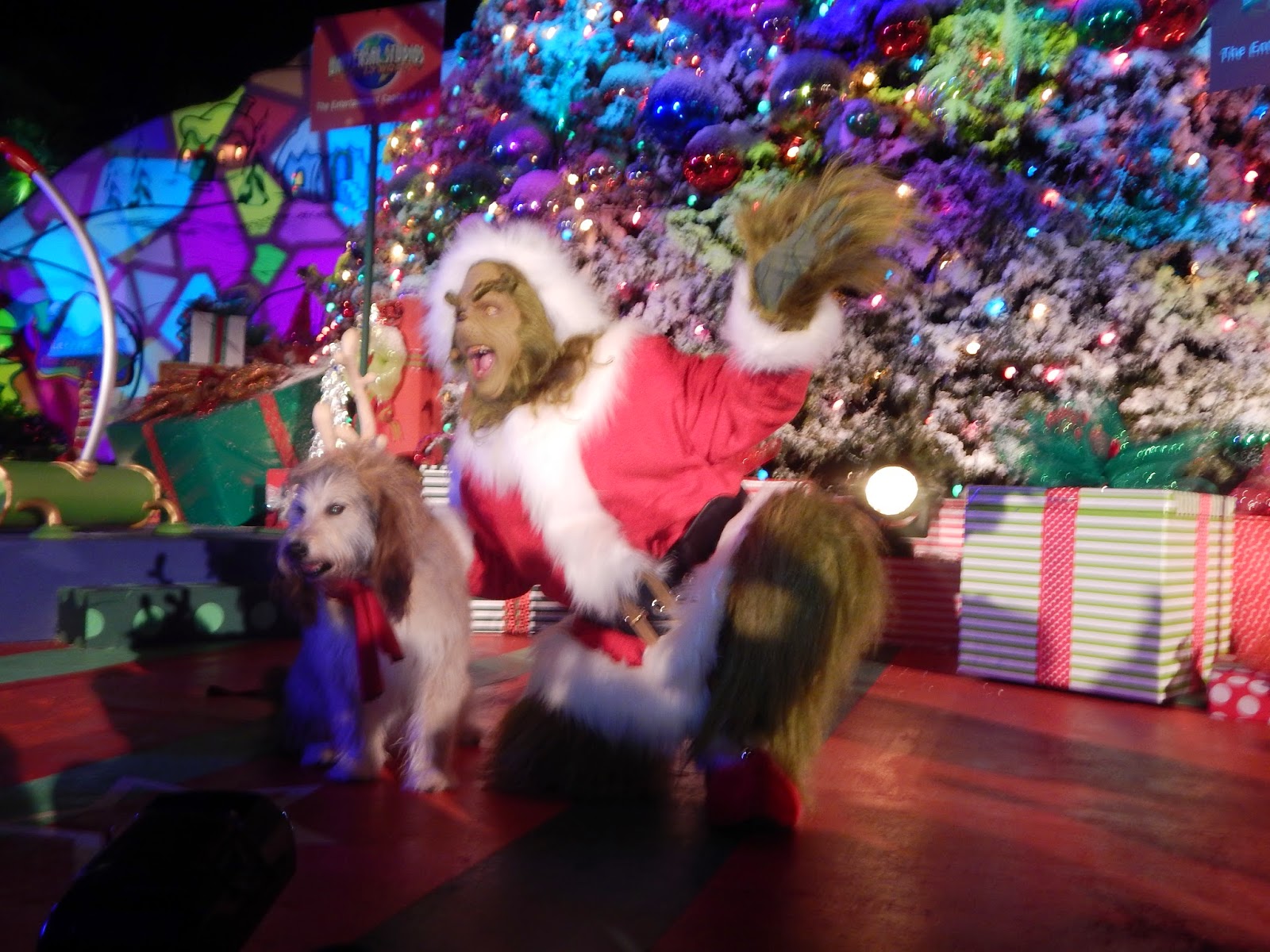 Proving it's for everyone, a galaxy of international news outlets from "Good Morning Britain" to major Latin television networks, such as Telemundo, Aztec, and Fox Latin Mundo, aired Grinchmas then quequed up to interview The Grinch himself.  Another example of American Pop Culture gone endearingly global.

For the opening ceremony for Grinchmas,  200 Los Angeles County elementary school children were the privileged audience for the celebration, opened by L.A. Mayor Eric Garcetti, Whoville Mayor, Augustus MayWho, Cindy LouWho and the entire town of Whoville, along with Alexa PenaVega, Carlos PenaVega,  and Yvette Nicole Brown to illuminate the curvy, swervy, twisty, turny towering “Grinchmas” tree to signal the start of the festive Wholiday season, only, at Universal Studios Hollywood.

Immediately, once the ceremony is finished, the children spread through-out Whoville to decorate Grinchmas cookies and crafting.  Of course, The Grinch hang around for interviews and one-on-one photographs with big kid fans.

If you're hunting for unique twist on Christmas and getting "ho-hum" grumpy about it, celebrate your quirks then head on over to "Whoville" at Universal Studios Hollywood for "Grinchmas" so nobody feels left out.

Posted by thearriviste at 11:35 AM