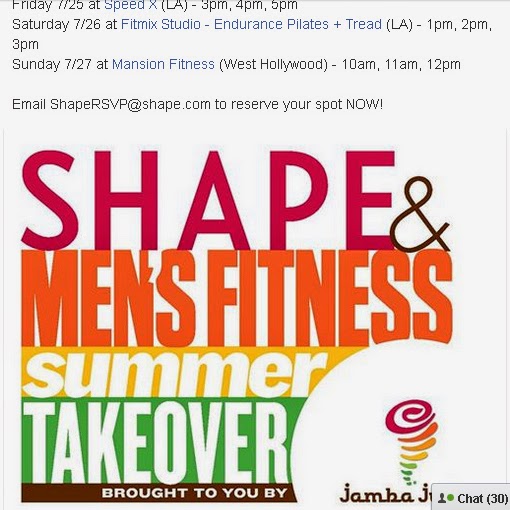 Love it, how here in Los Angeles, Bikini Season is the same season as the Food and Booze Food Festival Season.  Blame it on the God-given climate and soil but just because all this ripe fruit and vegetables are bursting out, it doesn't mean you have to burst out.

Bless these free fitness classes for arriving at the nick of time.  They'll help you deal and burn calories and detox so you'll be bikini-ready on the beach then foodie festival fab later at night.

This scribe wishes malls, especially ones carrying upscale, fancy fitness wear boutique chains, would do of what Westfield Mall in Century City is doing, Westfield Workout Wednesdays.  If they do more of these free fitness classes, people will have the reason to shop better and newer fitness clothes.

These are the free exercises under Westfield Century City Mall's "Burn This" Fitness Series:

Take advantage of all these free fitness, ShapeRSVP@shape.com for this weekend's SHAPE Magazine & Men's Fitness Summer Takeover tour with Jamba Juice andWestfield Century City Mall's "Burn This" Fitness Series, for the next 2 Wednesdays by emailing events@burnthis.com.

If all those fitness classes sound monotonous and routine and you want to exercise your knowledge and brain as well, Glendale Galleria and Glendale Arts are offering Free Latin Dance Classes, taught by Sergio Leal, owner of Latin Dance Pro in Pasadena, California.

Each Tuesday night, starting at 6pm until 8pm, will offer different style of Latin Dance:

As a reward for hanging in there, on the final night of September 23rd, Bobby Rivas & Band will play while the students show off what they learned.

Not only did you learn something new for your brain and burn calories, the next time you hit any dance floor, you got new moves.

Want to get your groove on, go to http://www.glendalegalleria.com/events/summer-pop-up-series-at-glendale-galleria, to find out more.

Posted by thearriviste at 9:44 AM