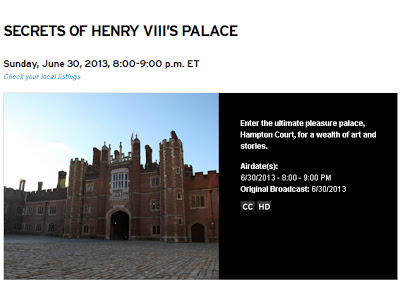 In continuation of PBS' "Secrets of Manor House, http://www.pbs.org/program/secrets-manor-house/" PBS starts off where it left off with it's hour-long behind-the-scenes series, "Secrets of Three Iconic British Homes Revealed" on PBS.

Smack dabbed in the middle of Summer, PBS kicks off their Summer series with "Secrets of Henry VIII's Palace" this Sunday at 8pm.

This is a long string of appetizers whetting the appetites of "Downton Abbey" fans who can't wait for the January 5th return with Paul Giamatti as Lady Cora's playboy brother,  Harold.

PBS' "Secrets of Three Iconic British Homes Revealed " series will keep them satisfied, for now, during the Summer.

The first one up is this Sunday at 8pm, again, with "Secrets of Henry VIII's Palace"otherwise known as Hampton Court.

Hampton Court is the ultimate royal pleasure palace — embodying the indulgent and grandiose kingship built by Cardinal Wolsey and developed by Henry VIII. Through its rooms, chart King Henry VIII’s decline from fit young warrior to bloated womanizer and recall the vivid stories of the ladies who became his queens.

Learn how William and Mary demolished half of the Tudor palace to replace it with an exquisite baroque structure, making Hampton Court one of the most unusual palaces in the world.

Go beneath the brick and stone of this true pleasure palace and now thriving tourist location to uncover an abundance of art and stories that bring Hampton Court alive. 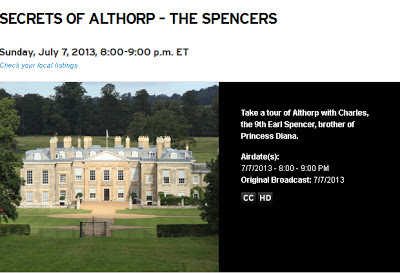 Following on the footsteps of July the 4th, PBS serve their second offering for all the Princess Diana fans, learn the secrets and history of her ancestral and childhood home, Althorp, now taken care by her brother, Charles, the 9th Earl Spencer. "Secrets of Althorp, the Spencers" airs on July the 7th at 8pm.

In the previews and ads, Charles wants to set the record about their childhood growing up on Althorp.  Sure, Diana's adult image was a fashionista city girl.  But growing up, he talks about them being athletic kids, swimming and playing tennis.

Nineteen generations of Spencers have presided over this grand estate for more than 500 years.

Noted for their generosity, the Spencers once came to the rescue of a distant cousin fallen on hard times: the great-great-great-grandfather of George Washington.  How fitting this episode comes on the heels of July the 4th. 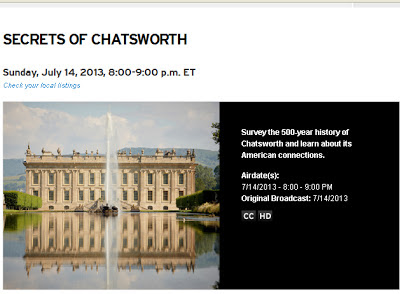 The third and hopefully, not the last is "Secrets of Chatsworth", two weeks later on July 14th at 8pm.

In its 500-year history, Chatsworth has been home to some notable inhabitants, among them the 5th Duke of Devonshire, his wife, Lady Georgiana Spencer, and Lady Elizabeth Foster, who lived together in a ménage à trois.

The Edwardian tradition of British noble men marrying American heiresses was alive and well there a hundred years ago.  Duchess Louisa’s daughter-in-law, American Consuelo Yznaga del Valle, introduced American heiresses into the British aristocracy; many of these young women married British noblemen. Billy Cavendish, heir of the 10th Duke of Devonshire, wooed and wed Kathleen Kennedy, the sister of future U.S. president John F Kennedy. The marriage was short-lived, however: Billy died in action in World War II four months after they exchanged vows. Four years later, Kathleen died in a plane crash. She was buried at Chatsworth.

Posted by thearriviste at 7:54 AM