Beyond the Gloss. Ain't Powder Puff. Michelle Phan's FAWN, Her Own YouTube Network & Her Own Generation Beauty Multimedia Beauty Expo 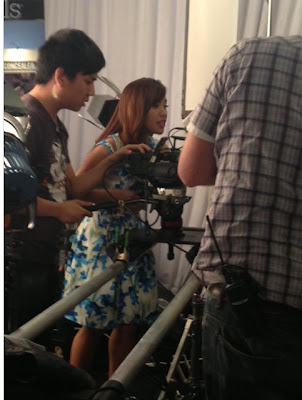 Who would had thought a Florida art school drop-out who was turned down for a Lancome counter job would rise up and run her own her YouTube Network and her own beauty expo and video workshop of her dreams?

That was the beginning for Michelle Phan, the YouTube sensation and Lancome's official Makeup Vlogger/Spokeperson.

Four years ago, she was just thrilled when Lancome appointed her to be their official brand ambassador and first official makeup vlogger.  But who would had imaged, she will be debuting her own beauty YouTube Network, F.A.W.N. otherwise known as "For All Women Network" to influential beauty insiders at her very own beauty meets media technology workshop, Michelle's very own Generation Beauty or "Gen Beauty" this past weekend at the very spot where the Grammy's held their afterparty, the Event Deck at L.A. Live.

A few steps away at a cube of a parking garage, the real action happened on the rooftop, the Event Deck, the very same spot and the very same white tent where the Grammys throw their afterparty.

Well, this is a very different type of celebration, not just for one young lady whose dreams came true but for a whole industry of a whole demographic that revolutionizing the beauty industry and the multimedia world all at once, Michelle Phan's dream beauty expo, "Generation Beauty" or just "Gen Beauty." 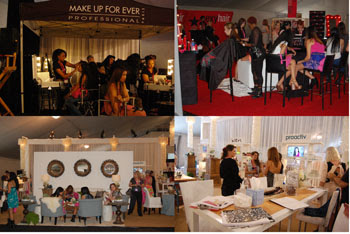 Yes, the beauty booths have matured into beauty lounges with proper chairs and tables and counters.  Yes, the swag of yet-to-be-released beauty products were sweet indeed.  Yes, attendees, including this scribe, got primped and prepped by the multitude of makeovers and blow-outs.

But what is really significant about Michelle Phan's/F.A.W.N.'s "Generation Beauty" was the army of tutu-clad, platform high heeled makeup junkie girls lugging tripods, digital cameras, camcorders, iPhones, and iPads shooting their own live makeup news segments and impromptu, on-the-spot cosmetic tutorials.  This scribe admits these sprinkled and speckled girls are more media-tech intensive than the boys.  The real meaning behind "Generation Beauty" is what differentiates from the increasing chic makeup/skincare trade shows.  It is the convergence where technology meets beauty enthusiasts.  This singular occurrence is
revolutionizing the beauty industry in tremendous ways...underneath everyone's nose.

Smack dabbed in the middle,

unbeknownst to most attendees until towards the end, is the For All Women Network's state-of-the art makeup studio, constructed specifically tailored to the makeup vlogger, reflecting white boards, klieg lights, a proper table with a proper mirror and a proper monitor.

According to Michelle's talent manager and the President of F.A.W.N., the purpose of Generation Beauty is to not only improve and educate beauty influencers' technical skills but to discover a new batch of talent to fill up F.A.W.N.'s programming.

One lucky attendee got the full "F.A.W.N." treatment when Michelle Phan surprised her yesterday afternoon at 4pm by directing her makeup tutorial. 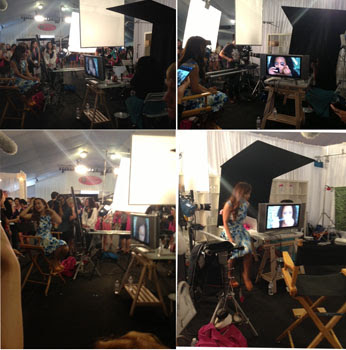 Shot like a professional movie or video, Michelle and her crew of Director of Cinematography, camera operator, and grips...and official photographers, with a crowd of makeup vloggers tossed in,  directed and coached the lucky attendee with her first makeup tutorial demo reel.  How lucky is that attendee?! 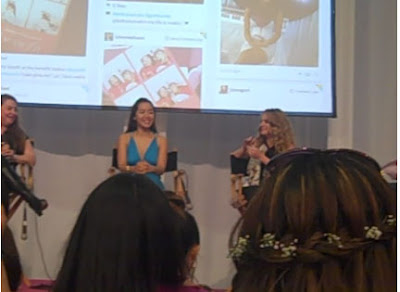 Honestly, this weekend beauty/tech expo was jam-packed with advice and coaching seminars and lectures with a crowd of bloggers and vloggers happily and hungrily soaking it up.

Michelle told the eager and curious audience (such as this scribe) her incredible life story and meteoric rise.

She told her ravenous fans that she was no different from them when she just a girl who loved makeup.  In the beginning, she improvised sound-proofing her bathroom from outside noise pollution to shooting inside her car for free quality sunlight and sound-protection.  Michelle said with each step forward and upward, there were growing pains.  At first, she wasn't exactly thrilled with her camera operator's makeup video editing skills.  Still, she appreciated his knowledge in lighting and shooting angles.   So, Michelle took up the editing herself for proper tutorial instructions for her videos.

Ronit, her manager (and F.A.W.N.'s president), quoted as saying "Michelle Phan has this 'Oprah Effect' on people."  The "people" she mentioned are Michelle's fans who fall squarely in the tween to teen demographics.  The same girls toting and hefting camera equipment through-out the convention.

This scribe has a "Michelle Phan"story too.  A mere year ago, at a Sephora in Glendale, Michelle was just thrilled she collaborated on a Lancome limited edition compact.  Now, she is launching her very own YouTube Network filmed at YouTube's state-of-the art studios in Culver City.  She, herself, couldn't believe how far she gone from being an sushi waitress/art student who was rejected for a Lancome sales counter job to having her own beauty/tech expo and media network in eight years.   Daft Punk and Pharrell Williams' Summer hit, "Get Lucky" was on constant loop through out the two days expo, an apt soundtrack. 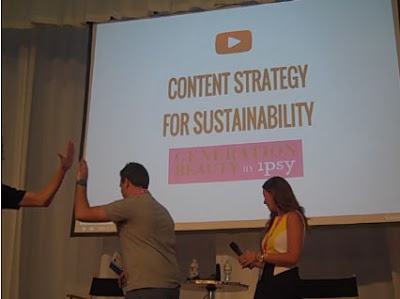 F.A.W.N. and YouTube believe in the rise of vloggers so much that they dedicated weekend afternoons to queries and problems affecting them specifically in this multi-media blogger/vlogger age, from fulfilling YouTube's network requirements to jealous online stalkers.

YouTube's Programming Strategist, Rachel Lightfoot, gave the attentive audience a list of features that programming executives, for any network, are searching for to fill up their program schedules.

Rob Polonsky, YouTube's Production Strategist, took over the last thirty minutes of the one hour lecture.  The whole audience was relieved as they were appreciative when Rob told them you don't have to spend an arm and a leg to film a high quality, professional video shoot, good enough for network tv.

He held up a compact, lightweight camera/camcorder holster, with light and microphone, that he construct for a mere $50 bucks.  However, he used it to hold a GoPro which is up in the $300 range.  This scribe was more relieved when Rob showed another model, an iPhone5 with attachable zoom lens specifically made for a smartphone...and a mic...in a frame for an iPhone, what a relief.

Michelle Phan thought of everything...as in an amazing rotating army of gourmet food trucks to keep the fans sated and fed.

This scribe wasn't the only hungry-hungry hippo.  The organizers were pleasantly startled that the crowd was raving about the food trucks.   With all that running around, lining up for sample Happy Hour, shooting, filming, interviewing, painting, teasing, and lugging film equipment, you not just burn calories while looking fabulous,  you work up an appetite.  Thank you, Michelle.

F.A.W.N.'s "Generation Beauty" expo wasn't just about Michelle Phan.  She is just a symbol of a quiet but powerful evolution of "girl power" and the powerful economics of the female consumer driving the beauty market while transforming the dynamics.

A weekend army of beauty enthusiasts obsessively carrying loads of the highest high-tech equipments to obsessively document the newest and latest beauty trends; and YouTube being aware of these influencers by returning the favor by offering advice from providing a studio to giving video workshops and advice seminars in how to deal with professional growth to For All Women Network coaching and hunting for the next Michelle Phan, "Generation Beauty" is a real female revolution that die-hard feminists were champing for but it comes in coated in lipstick, foundation, hairspray and equipped with a smartphone and a tripod.

Posted by thearriviste at 2:33 PM