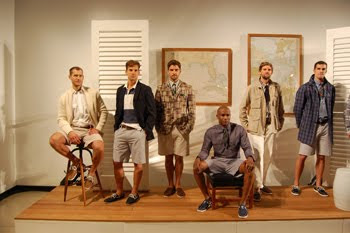 The changes in the season, the computerized check-in, and the new Lincoln Center location in the Upper West Side were not the only changes...but how designers literally present their collections have transformed themselves.
Whether it was the ease of having all the models and the outfits showcasing at once or people just wanting to remove the headache of the pecking order fighting over seating arrangements or standing, art-world influenced installations or presentations, which they are now known, are the actually, the newest trend in the New York Fashion World.
It equalize the social order where the A-List mingle with the low-key but classy patrons and both hassle for camera position.
The runway transformed into a setting or a stage reinforcing the theme or concept of the collection.
In the wake of the return of "The Preppy Handbook" through its sequel, "True Prep," Nautica showcase a line of water-proof sportiness with cozy but rugged windbreakers and boardshorts then running onto natty seersucker blazers paired with Bermuda shorts in madra, topped with bow ties and nerdy-on-the-outside-but-sexy-in-the-inside thick, rimmed eyeglasses.
Preppiness can be so smoldering without the sluttiness. 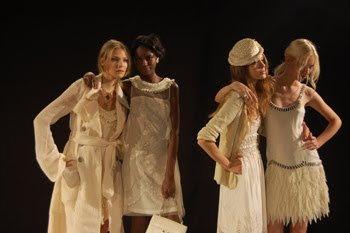 For some attendees, it was fun to just come in and shoot the models like statues.

The models in return either enjoy themselves posing and making expressions, as in Yoana Baraschi's presentation, or some wish they were strutting up and down the runway instead of being stiff for two hours.

Truly, it is the setting and the clothes that determine the posing, the movement-or the lack thereof-and the models' demeanor at the presentation.

The surfer boys at Nautica maybe stiff accessorizing the windbreakers and hoodies with their hard-won six-pack abdominals but towards the other end of the spectrum, their better-attired buddies in madra sport shirts and polos were joking and having fun, emitting that care-free Preppy fun that folks have come to know and love.

In a homage to Faye Dunaway in "Bonnie and Clyde" and the devil-may-care Flapper, Ms. Baraschi's models were jaunty and jolly as they were youthful. 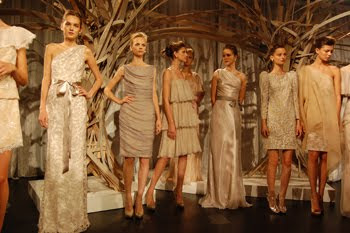 Tadashi Presentation.
Whereas during Tadashi Shoji's Presentation, since the man prides himself on stately elegance, the models were graciously calm under the popping bulbs and glaring flashes. They were statues of lace and satin chiseled out of ivory and cream.
Mercedes-Benz New York Fashion Week Spring/Summer 2011 was about the presenting oneself.

Posted by thearriviste at 3:48 PM