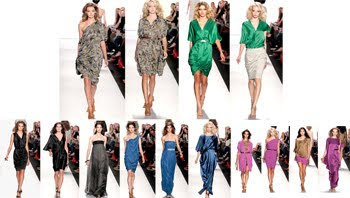 Ports 1961's dazzling array of African Desert-inspired jewel and gem-tones.
Ports 1961 Spring/Summer Runway Video http://www.youtube.com/watch?v=QF62x9omb58
Instead of adding on a necklace, a bracelet, a pair of earrings, and a knuckle of a ring, Gottex, Ports 1961, and Cynthia Rowley are giving women the option to wear their gems through embellishments and sewing on the crystals and baubles onto garments and swimsuits. 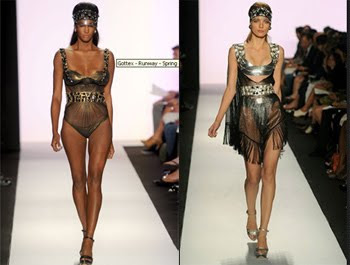 Gottex's bronze and gold baubles sewn unto chiffon as belts and straps or used as sun visors and headbands.
The best way to describe the bevy of baubles is by borrowing a passage from Richard Conniff's "The Natural History of the Rich."
A Parisian friend of his made an astonishing comment about her English host's family hand-me-down emeralds, "Choong! Choong! Choong!"
This is how this writer sensed while watching an array of jewel-toned glass/plexiglass carats and baubles strutting down the runway.
The stately Ports 1961 literally set the tone when half of the Cibani sisters, Fiona Cibani used the pseudonysm "Essadi" to describe the discovery of gems and minerals in the North African desert, using them as color palettes.
Using the arid sand and the vivid sky as background, the main stars were the gems found in Africa: sapphire, emerald, and amethyst spun into silk caftans, tunics, and sweaters.
The jagged luminescent were digitally printed onto silk satins and chiffons in bold tonal palettes while Labradorite minerals became abstract camouflage prints. The sapphire mosaic prints resemble cracked open geodes, becoming the new animal prints. 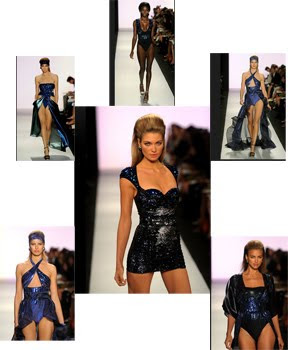 At Gottex, those jewel-tones blow up into huge glass or plexiglass gems chisled into carats or sprinkled on as sequins. Jewelry were the integral component of the swimwear as belts and straps in bronze and gold. Coverups, bikinis, and swimsuits were dipped in jet black beads or sapphire crystals. The jewel colors started by Ports 1961 were only more reinforced by the rich shades in tulle and chiffon on delicate display by Gottex. 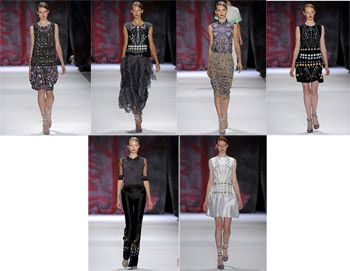 She literally took this baubles idea then turn it into a new twentieth-first century version of Byzantine style.

Palletttes were turned into cabochons that radiate from the center of the collar, the chemise, the shell, and the shift dress. Actually, Ms. Rowley took another Byzantine clothing, the tunic, then transform it into a chemise, a shell, and a shift dress.

The leather trousers got the Byzantine effect by adding on the bold pallettes at the hems.

Posted by thearriviste at 10:53 AM