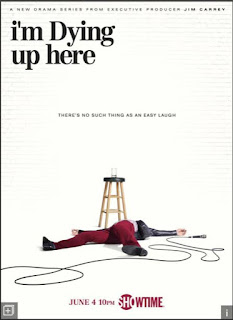 The aptly named TV series by Jim Carrey, with Showtime and Hulu, "I'm Dying Up Here," involved one of the characters dying on the premiere episode.

It's premiering Sunday night, June 4th, at 10pm on Showtime and Hulu.

"I'm Dying Up Here" is also a comedian slang for a failing joke that's failing on the stage and the audience ain't buying it.  A comedian's dread that happens to every and all rising comedian.  A weak hole that opens harassment from a weary, jaded audience, hurling their insults towards the comedian.

This is Jim Carrey's trial and tribulations to the comedians who came before him and never made it like him.

Pre-SNL, the highest a comedian can do and be was cracking jokes on Johnny Carson then plopping directly onto Johnny's couch then calling it a night.  Millennials, remember this show was set in 1973, way before David Letterman, Jimmy Fallon, Jimmy Kimmel, and the multitude of late night shows crowding the air waves now.

Back then, Johnny Carson was the only game and the end for comedians.

Where desperate, tired, and hungry comedians use blue of the bluest language joke on current affairs to fat, rich, and jaded talent coordinators, talent managers, and agents who had seen every comic since Milton Berle and Red Skelton were belting it out on the Borscht Belt, over in the Catskill Mountain resorts.

Jim Carrey also wants to show the close camaraderie formed among a certain generation of comedians struggling together as new ones come in while others get knocked out or rise up.

Before Saturday Night Live, "I'm Dying Up Here" shows how small, insular, and not-so-popular...and how limited the opportunities were for stand-up comedians back in 1973.

This is the era where established comedians, such as a Jay Leno and Robin Williams, cut their teeth.

Goldie's was literally the gold standard showcase compared to the nasty strip clubs where young'un newbie comedians have to cut their teeth as stripper intermission, handling sleazy clientele.

Since this drama focuses on twenty-somethings cutting their teeth, it's a rough and raw coming-of-age drama where these cutting-edge comedians use blue language to joke about race, sex, and gender, reflecting the emerging issues defining their generation, Baby Boomers.

As one gets knocked out, new ones come in, keeping the flow of a close-knit, substitute family of young twenty-somethings Baby Boomers, over seen by a tough broad of a den mother, tight, in the 1973.

This generation of comedians are rounded up by a cast of:
Ari Graynor
http://www.sho.com/im-dying-up-here/cast/cassie-feder

Edgar Martinez, the lone Mexican-American cracking jokes about what it means to be American of Mexican descent, still a standing topic today.

The elder African-American comedian/writer and Vietnam veteran among the close-knit group.

One of the brighter stars on Goldie's roster, Bill is his own worst enemy. Acid-tongued and bitter, Bill's perpetual anger at the unfairness of the comedy world, and jealousy of those higher up on the food chain, make him do rash and foolish things. He's got the looks and the raw talent, and he is not completely without charm, but he repeatedly sabotages himself through his incessant negativity.

As the existing Goldie's family of comedians bond over losing one of their own, fresh blood arrives in...

Ron and his pal Eddie Zeidel, went from hand jobs and cracking jokes in a sleazy Boston strip club to crashing in somebody's closet above the Sunset Strip.

A very green young comedian fresh from Boston, Eddie arrives in LA with his friend and fellow comic Ron Shack with empty pockets and big dreams. The somewhat nebbishy Eddie is nonetheless sharply funny, and although he doesn't know much about how to make it, he does know enough to head straight to Goldie's.

A hungry young comic who's idol is Richard Pryor, Adam is trying everything he can think of to move up from the bottom rungs of the comedy ladder. Flat broke, determined and desperate for money, Adam is forced to regularly demean himself to survive.

Goldie's "Goldie's Comedy Club" is where dreams are made...for comedians.  A direct path to Johnny Carson.  A den full of talent coordinators, managers, and agents feeding on fresh talent for a world hungry for talent.

It's up to Goldie to dole out tough love and advice to new generations of comedians reflecting changing times and mores, against her Old School ways.

Whether it be 1973 or twenty-something Baby Boomers, "I'm Dying Up Here" is a snapshot of a time, a place, and an era of what it means to be young, starving, and hungry while on the cusp of fame, of making it.

Posted by thearriviste at 11:47 AM

I have just downloaded iStripper, so I can have the sexiest virtual strippers get naked on my desktop.