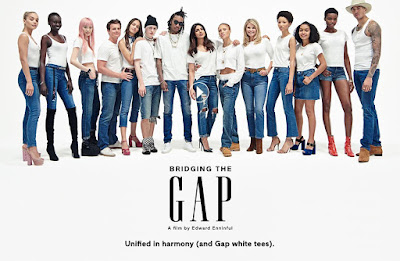 Gap, the iconic American clothing brand, announces the launch of the film 'Bridging the Gap,' directed, cast and styled by Edward Enninful. The film is a celebration of American optimism shared by Enninful and Gap. Enninful selected a cast of individuals he's worked with, championed and admired who embody American culture today. The iconic Gap basic white t-shirt serves as a blank canvas for each of the cast to take and make their own, offering a glimpse at how their differences unite them.

"I love the optimistic American style that Gap celebrates and the simplicity of the basic white t-shirt that allows you to be yourself," said Enninful. "Growing up, I loved the imagery I saw from America as it celebrated being the land of the free and home of the brave. This project is about authenticity and people living their truths."
"Gap is a quintessentially American brand and we strive to embody all of America in everything we do," said Gap chief marketing officer Craig Brommers. "'Bridging the Gap' is about showing the many faces of what it means to be an American and bringing all of those sides together. Edward is the perfect partner in this project as he and Gap share an optimistic view of the world."

As soon as Edward Enninful was done directing this ad, he was promoted as the first British Black and first male to be British Vogue's Editor in Chief.

The cast sings "Sunny" by Boney M., which conveys a message of optimism as a direct nod to the film's concept, while each dances to their own rhythm displaying their individuality, and then come together as a symbol of unity.

"Bridging the Gap' is exactly what the world needs right now, there are so many gaps in  this world that need to be bridged and filled. The most important one for me is empowering women, women need to be given an opportunity to stand on their feet and do the best they can for themselves," said Chopra.
Other cast members include model and activist Adwoa Aboah, model Maria Borges, Olympic champion fencer Miles Chamley-Watson, theater, film and television actor Jonathan Groff, model Fernanda Ly, model Lineisy Montero, model Ellen Rosa, model and Instagram star Jasmine Sanders, actress and model Yara Shahidi, and model and designer Alek Wek.

The film is supplemented by a 'Making Of' video created by The Madbury Club featuring Enninful and the cast sharing their thoughts on what it means to bridge the gap and offering a behind-the-scenes glimpse of the film's creation.

Posted by thearriviste at 9:42 AM