Because New York fashion designers are solidly commercial constantly, they have the financially backing or their own bank accounts to throw productions that put their "Best Coast" peers to shame.

Tommy Hilfilger's "preppy-isms" is preppy-iness that works.  It's just not "Americana" for whatever era's youth.  It's "Americana" that works on a global scale.  Why not throw a "fashion festival" for everyone who wants to participate in his idea of California, Coachella but it's his idea of Coachella, #TommyLand.

Tommy Hilfilger's Spring/Summer 2017 "fashion shows" on the Venice Broadwalk at the dodgy "Dogtown" Venice Beach was "Fashion Coachella."  Having always been "youth-oriented," basically retooling preppy staples to sell that era's current teens and twenties, he took their "festival," Coachella then restyled it into his "Fashion Coachella."  A "Fashion Carnival" with a his own bigger and better Ferris Wheel ride; a 200 ft. tall slid; a free concert by Fergie post-fashion show, Venice Beach fire eaters, and of course, it ain't Venice unless there's a Kogi Korean-Taco Food Truck.

Tommy x Gigi's "Direct Runway to Retail" pop-up shop made back its money from its multi-million dollar production value in that one night, when 2,000 shoppers stripped the pop-up shop bare.

The 8,000 fortunate, standing-room only fans and guests were treated to a free concert by Fergie, also wearing the fresh Spring/Summer 2017 Collections... 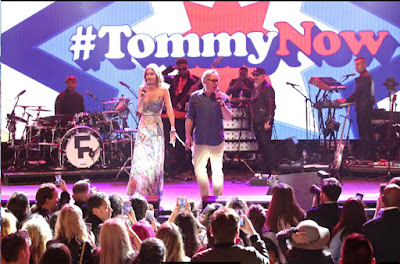 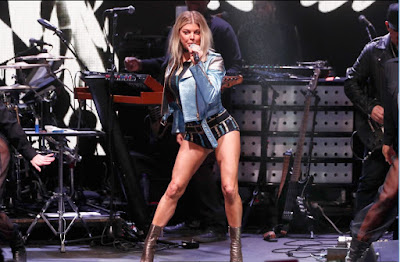 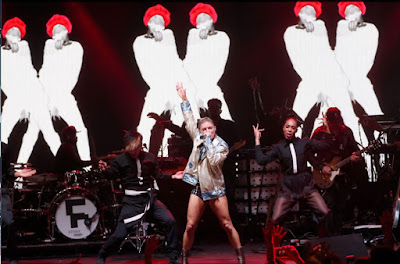 A pop-up shop stocked full of real Ready-to-Wear wearable daily wear is a formula for a sure-fire hit.

Tommy treated teams of foreign press to their own dinner.

Of course, front row celebrities such as Lady Gaga, making her first LA appearance before her Grammy Metallica performance... 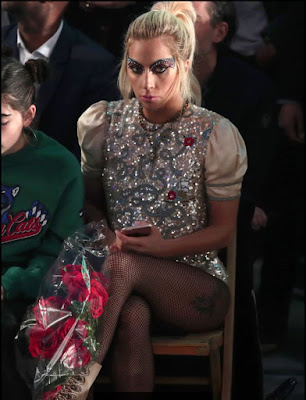 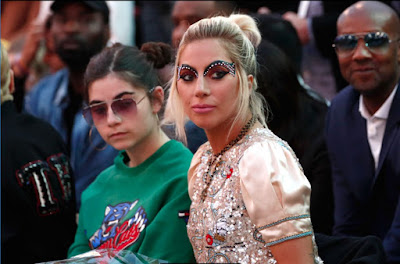 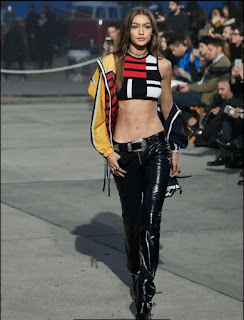 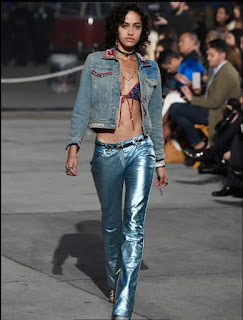 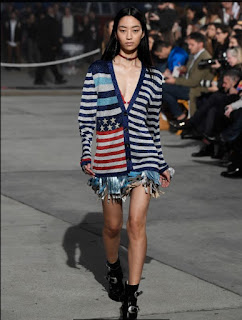 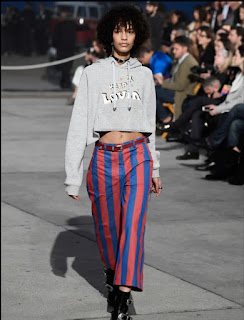 
Yes, he and Rebecca Minkoff induced "fashion envy" among their West Coast peers, but this comes from doing New York Fashion Week's more commercial, mainstream bent for years than it is being "artsy-fartsy" cool.

Tommy has the market and the money to throw his own version of Coachella then put them to good use.


Rebecca has the good insight to appreciate financial, production, and venue help from wise mall-developer/retailer, Rick Caruso.  He was a "Fashion Sugar Daddy."  He loaned her his security and logistical staff, his Grove train trolley, his "central park" for her pop-up shop, and venue for a beneficial spectacular runway show that she couldn't get otherwise in space-starved, investor-weary Manhattan.

Despite what naysayers say, the shoulder, whether it be off-shoulder, one-shoulder, or collared-halter neck, is here to stay.  Shoulders are the erogenous zone.

If "Sex and the City" is alive and well, continuing into the 2010's, Carrie Bradshaw would be floating in Rebecca Minkoff's dreamy, girlie linen, ruffled and lace-trimmed dresses and tops.

Samantha Jones, the experienced and wise pro of the bunch, would be donning Tommy's preppy-for-the youth knits and denim because he's money, a.k.a "commercial."

Both Tommy and Rebecca say they decided to throw their fashion spectaculars in LA because their Spring/Summer 2017 collections are inspired by Sunny California, more specifically Sunny Seventies California.  Where better than induced "Buy Now, Direct 'Runway-to-Retail" pop-up shops for immediate production cost recoup, than stage their easy-breezy runway shows in matching sunny, warm LA, where you can wear the freshest Spring/Summer fashion, literally fresh off the runway.
Remember, America's biggest city has the space and the room for the runway of your dreams and your pop-up shop of your dreams so you can recoup the fashion show cost, if not more. 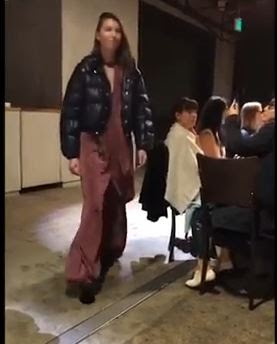 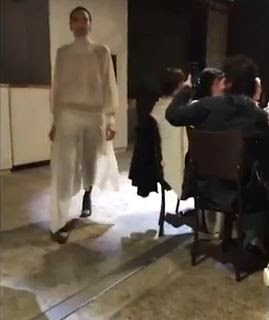 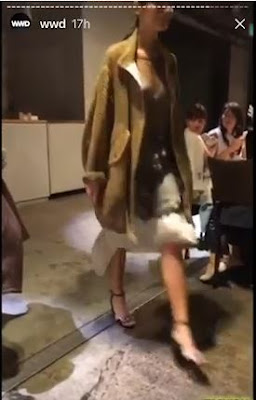 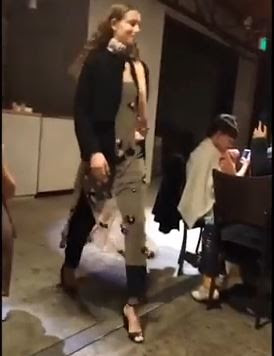 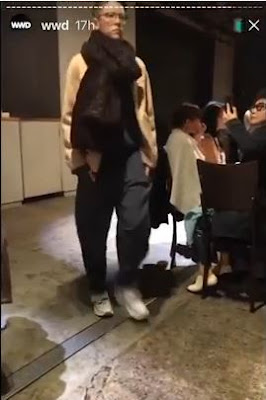 Rachel's "Millennial Modesty" was a complete opposite to Tommy Hilfiger's "flesh flash" at his "Fashion Coachella" on the Venice Beach.

Deeply inspired by the "Million Women Marches," Rachel presented how today's Millennials buy and dress.  It's a reboot of how Gen-Xers used to dress twenty years ago, back in the Nineties, but's black-er, more sheer, and better tailored leather cut as light-weight fabric.  Think black sheer turtleneck under a light but tight black slip dress, or camel coat over floaty flower dress.

Thanks to this scribe, "Giving Honey Kettle a Run for It's Money, Estrella's Honey Fried Chicken." http://luxurist.blogspot.com/2015/11/giving-honey-kettle-run-for-its-money.html, Estrella on the Sunset Strip is the new feasting for the fashionista set.

It was at Estrella, dining, that got Rachel to think having her fashion show as proper and healthy sit-down, formal dinner/supper party, a civilized-counterpoint to the usual loud and brash DJ after-parties.

“Having a dinner party atmosphere just made everything more meaningful,” she said. Though this was her first season collaborating with Mattos, the pairing was an organic one for the two creatives. Comey, whose studio and home are both near the buzzy, NoHo-based restaurant, dines there frequently and counts Mattos as a friend. “There’s a pretty good, seamless, frame of mind between Rachel and Ignacio. They have the same philosophy,” said Thomas Carter (Estela’s co-owner).

1. Preheat the oven to 500 degrees. Let the fish sit at room temperature, covered, for 40 minutes.

2. In a large mixing bowl, combine the kosher salt and water. It should expand and feel like sticky, wet sand on the beach.

3. Stuff the whole fish with the lemon halves and the bronze fennel, oregano and thyme. Place a layer of the wet salt on a baking sheet, about 1 inch thick, and set the fish atop it.
Cover the fish with the remaining salt, packing it into a mound, and then place the baking sheet in the oven for approximately 40 minutes.

4. Let the fish rest for 25 minutes. Crack the crust and remove (and discard) the salt.

5. With scissors, cut around the side of the fish and pull off the skin, starting from the tail.

Then remove the bone, also starting with the tail. Filet and serve, making sure to hit each piece with lemon juice, salt and olive oil. 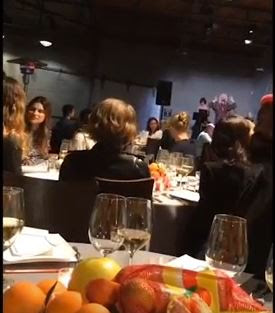 Hosted by the spacious Hauser, Wirth & Schimmel gallery, with room for the in-house Manuela Restaurant that catered the fashion dinner show, Rachel Comey's intellectual, thrifty and modest outfits reminds one of a former New York, when art galleries can afford to dominate the formerly gritty, industrial SoHo with reasonable rents.  Well, this is where gentrified Downtown LA is at, from a nasty, no-man's land of sweat shops to an industrial chic and sleek neighborhood with enough room for an art gallery and a restaurant.  Something New York can no longer boast about.

Tragic that LA's homegrown designers, whether they be Classic Hollywood Glamour or Melrose Hip n' Trendy had failed where their New York Fashion Week designer counterparts have succeed, by throwing blow-out fashion shows that gain equal amounts of jaw-dropping awe with sure-fire, immediate hits flying off the racks.  Satisfying people's immediate gratification, after whetting their appetite for new clothes, for instant profits, in the healthy red, to recoup production costs with more than enough profits to keep them healthy and afloat for another fashion spectacular.

This style scribe started out as a fashion blogger/journalist, the last time there was an official LA Fashion, with corporate sponsors, with then-burgeoning reality celebrities (Kim Kardashians) just starting out, after all the respectable A-listers had gone to bed, after Awards Season.  That was ten years ago.

Other, more fortunate writers and bloggers complained their schedule has become more busy and more "double the stress," because this trifecta of New York Fashion designers decided to disrupt the already steady and established Grammy Week of gifting suits, brunches, and more free dinners. Some picked sides. Some just do the Grammys. Some, mostly baby Millennial bloggers can only comprehend the fashion shows (lucky devils) while others who are well-rounded and cultured, such as this scribe, can do both and wished for more.

Posted by thearriviste at 12:57 PM