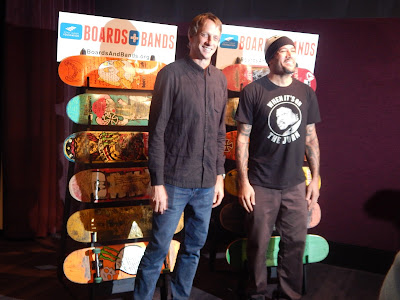 That's how Ben Harper, an amateur skateboarder, said he soaked up some tips from Tony Hawk; and Tony, in return, soaks up inspiration from rockers like Ben.

So, it wasn't surprising that their mutual friendship will strike a charity foundation offering skate parks for at-risk youths, Boards + Bands.

It simply started out when rock fan and master skateboarder, Tony Hawk, asked musicians to autograph his skateboard whenever they're doing an event together.

The mutual awe is returned when rockers gladly jotted their entire lyrics to the skaterboarder's favorite song then autograph it.  Ta-Dah!  Imagine how much this skateboard will fetch on the open market?!  Imagine how much money will raised for skate parks for kids who really need it.

That's how Boards + Bands started out.

Here is the list of rockers who wrote down their lyrics and autograph on whose boards:


Tony Hawk + U2 "Where The Streets Have No Name"


Doug Saladino + Pearl Jam "Nothing As It Seems"


Boards + Bands pairs A-list award-winning music talent with some of the biggest skateboarders in the world through artful collaboration. Hawk invited a select group of professional skateboarders to donate their personally ridden skateboards and submit the name of their favorite songs. Harper then sent those boards on to the appropriate artists with one simple message: "Please write the lyrics to this skater's favorite song on his skateboard, and we'll use it to create more skateparks for kids."

"We are thrilled about this year's amazing collection of boards featuring unique collaborations between some of the biggest names in skateboarding AND music, and we are grateful to all that made it possible," said Tony Hawk. "We have high hopes for this year's auction as we continue to further the Foundation's mission of bringing skateparks to low-income communities around the world."

"As a proud Board Member of the Tony Hawk Foundation, it's inspiring to see such an amazing outpouring of support from this year's collaborators," said Ben Harper. "This year's auction is sure to be the most successful to-date, and we are eager to put the proceeds back into this important cause."

The auction is now live and those interested in bidding can do so at www.BoardsAndBands.org.
100 percent of the funds raised from the auction will directly benefit The Tony Hawk Foundation - a charitable, nonprofit organization that promotes and provides technical assistance and funds for high-quality skateparks in low-income areas throughout the United States that promote healthy, active lifestyles, and for International programming that enriches the lives of youth through skateboarding.

Since launching the program in 2012, The Boards + Bands initiative has raised over $139,000 to benefit the Tony Hawk Foundation.

ABOUT THE TONY HAWK FOUNDATION

A charitable, non-profit organization, the Tony Hawk Foundation was established in 2002 by its namesake, professional skateboarder Tony Hawk. THF promotes and provides technical assistance and funds for high-quality public skateparks in low-income areas throughout the United States that promote healthy, active lifestyles, and to International programs that enrich the lives of youth through skateboarding.

Domestically, the Foundation's Skatepark Grant program has awarded over $5.3-million to 560 communities in all 50 states. The Foundation focuses on working with local officials and grassroots, community-based organizations that plan to hire designers and contractors with strong experience designing and building skateparks.

The Foundation's International Program has provided technical support and awarded $100,000 to assist youth through the Skateistan educational programs in Afghanistan, Cambodia, and South Africa ( www.skateistan.org ).

The Tony Hawk Foundation was established by a gift from Tony Hawk. Its directors raise additional funds through events, industry donations, and continuing contributions from Tony and other entities. For more information or to make a donation, visit the Foundation's Web site at  www.tonyhawkfoundation.org . You can also visit THF on facebook and Instagram @tonyhawkfoundation, and on Twitter @THF.

Posted by thearriviste at 1:46 PM