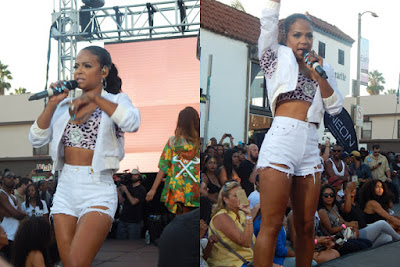 Culling a page from rock lover, Christian Audigier, Christina Milian combined a street fair, block party, dance showcase and concert on a catwalk, all for her own clothing line and boutique, "We Are Pop Culture."

A collection of both streetwear and activewear, the all-afternoon block party with the usual suspects of food trucks, got the party started at 3pm with warm-up acts and hip-hop duos and singers. 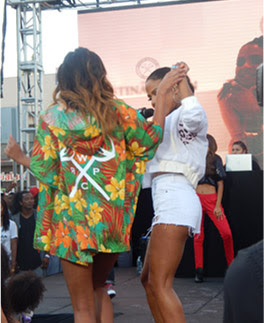 Who are we kidding?  Her fans flocked and blocked the intersection of Melrose Avenue and Sierra Bonita to see their idol take over an intersection for an afternoon of Christina-inspired aesthetics, seeing the whole Milian clan (her sister MCed the festival) and hoping to be filmed on her reality show.

It was an happy day for fan swag. 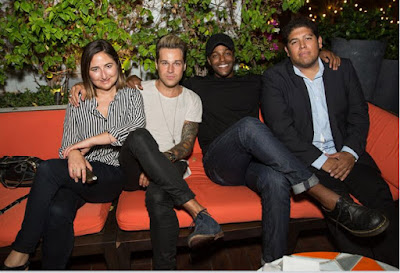 Since the majority of Christina Milian's fan base are tweens and teens, those fans will eventually grow up into college, travel, and be cultured.

As soon as Christina Milian's block party ended firmly at 6pm to please the local residents, Grazie Cinema Series first party at Skybar got rolling at the same time at the other end of West Hollywood.

The crowd may be slightly older but way more cultured than the all-afternoon block party tweens and teens.

Tracy Antonopoulos (filmmaker), Ryan Cabrera (musician), Austin Brown (nephew of Michael Jackson) and Dawn McCoy (actress) were among the many influential Gen-Yers and Xers relishing the food-meets-film party reminiscences of what Gen Art used to be. 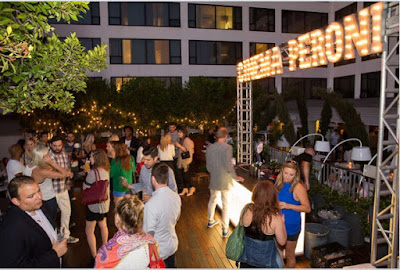 Friends and tastemakers came together on the rooftop of LA's stunning Mondrian Hotel Skybar to celebrate with Peroni Nastro Azzurro and talented filmmaker Tracy Antonopoulos for the second edition of the Grazie Cinema Series. For the summer of 2015, Gia Coppola has curated a series of classic Italian pictures to travel around New York, LA and Miami to honor the style, craft and vision of Italian film and artistry.

For the second edition of the series, close friend of Coppola and talented filmmaker Tracy Antonopoulos hosted a special screening of  ‘The Bicycle Thief.’ The film was prefaced by the exclusive short film, ‘The Magic Word,’ created and directed by Antonopoulos. Guests sipped Peroni and enjoyed classic Italian hors d’oeuvres poolside with the breathtaking view of the city below.

This might had been the second of the series but hopefully, not the last.
Posted by thearriviste at 12:57 PM