Los Angeles, Always Something Up Its Sleeves 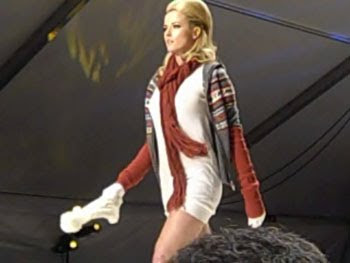 Raw 7's Alpine Cardigan and Sweater Mini Dress/Tunic
This scriber senses most folks are just dying to shed their winter layers for something lighter and brighter for Spring and impending Summer.


However, for the fashion-forward tribes, it is never too late to get the jump start on what's going to be sizzling for Autumn and Winter, to beat everyone to the chase. 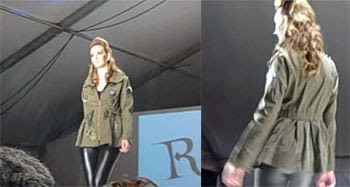 The most subtle innovations or trends for Fall/Winter is applying traditional feminine ruching and smocking to traditional male utilitarian/military streetwear for everyday wear.

Since women like and admire the functional chic of the military and some tolerate the discomfortable of squeezing their bust and ribs in the straight male bodice cut in order to enjoy the styling, the warmth, the multiple pockets, and the durable cotton canvas covering, Raw 7 knows better.
By simply lifting the smocking and ruching of the empire waist off the stereotypical girly-girl babydoll tops and camisoles then inserting it underneath a woman's bustline then adding kick pleats in the back.
This new silhouette is comfortable enough to relax and breathe; roomy to move and sway and empire waist emphasizes what is good about a woman's physique, the hourglass figure, without menswear constrictions. 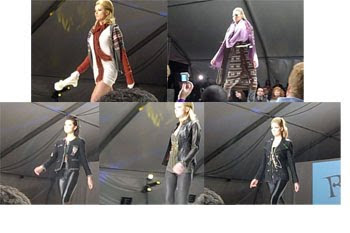 Raw 7 did the same empire waist on the black leather motorcross jacket so it will pair well with their edgy, empire waist tees and sweaters. A woman retains what is good about male-centric functionality while accomodating her curves and fit. This is the next evolution in streetwear.

There was also an Eighties Redux with Karl Lagerfeld's Chanel-inspired sparkly blazers and box jackets, decked with black leather leggings as second skin.

For something cozy, Los Angeles-based, Hollywood-catering Raw 7 did something unexpected-Alpine Wear in knits, sweaters, scarves, and cardigans for both women and men. 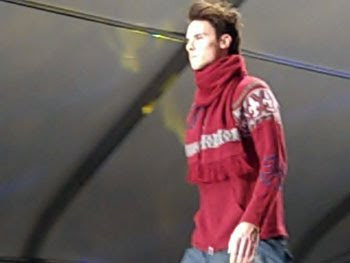 Raw 7 busts another stereotype about Los Angeles, the young dandies out there do want to spiffy up.
Whether they aspire to be dapper "Mad Men's" Don Draper or the suave stud "Agent 007/James Bond" Sean Connery, there were a plenty of bow ties fluttering about on the catwalk.
Young men in their twenties are shielding their torsos in gray flannel vests and ties while adding the streetwear arnsel of fingerless gloves/mitts, studded leather cuffs, and heavy metal gothic gear chains are the new pocket watches.
Taking a riff from Robert Downey's street smart "Sherlock Holmes," it's the new Victorian Gent.

Instead of the usual Hollywood brouhaha of hip hop artists and dancers, Los Angeles Fashion Weekend ringmaster, Mikey Koffman stepped on stage, asked her girlfriend, Ashley, to step out.

On her hands and knees, Mikey simply, sincerely, and sweetly asked Ashley to marry her.

This is not only a triumphant demostration of civil rights for the twentith-first century. It is not only a turning point in Mikey's and Ashley's lives but a scene for a potential reality show for a network that laid claim to the pioneering, "The L-Word." Watching a swarm of top-notch camera crews following each and every of Mikey's moves, this is something we all should keep our eyes out for in Fall.

Like this scriber said, Hollywood always has something up its sleeve.

Posted by thearriviste at 10:00 AM