It's Official! Mikey Koffman, of The Gallery LA, is 1 of the stars of Showtimes' "The Real L-Word, Los Angeles." 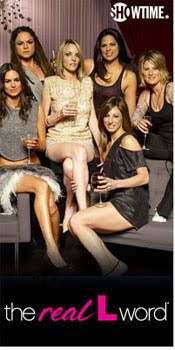 Another official photo of Showtime's "The Real L Word."
This mousy fly-on-the-wall knew something was going on when this mouse caught fleeting sights of Koffman buzzing about Sunset Gower Studios, being trailed by a swarm of top-notch camera crews that stuck to her every step like flies to honey.

Matter of fact, this writer knew something was up while signing at press check-in, there was a disclaimer/warning posted above politely yet straight-forwardly informing media and guests by checking in, they have immediately consented to be filmed by Magical Elves, Inc. The fine folks who produced Bravo's "Project Runway" and "Top Chef: Masters."

Once in the mix, whispers were hinting to the reality show and the network and the title, with the word, "potential" being constantly linked.

Mikey's proposal to freelance makeup artist, Raquel Castaneda, as the runway show's finale only solidify the rumors and the hunches. 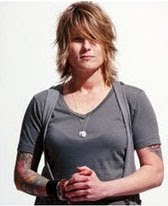 Mikey Koffman Headshot
According to lesbian-focused and entertainment media sources, "The Real L-Word" is another extension of Showtime's original series, the Jennifer Beals-leaded, "The L-Word."
The creator, Ilene Chaiken, sensed that telling the stories of lesbians who are influential in their industries in the City of Angels has not been told properly. She decided after the fictional story/series had ended last year, Ms. Chaiken felt it was time to expand further and showcase the real stories of not only real lesbians but real Los Angelenos in general succeeding in business while juggling their personal lives. Busting the myth and stereotypes so to say. 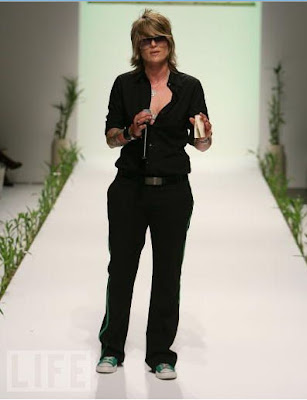 Mikey Koffman during one of her "The Gallery LA" runway shows.
With the production team of Magical Elves and Ms. Chaiken, Showtime will shine the spotlight on six real-life lesbians running their businesses and managing their relationships for nine episodes, starting on June 20th, on Sundays at 10pm.

Remember, these cast members are not just gay women but prominent professionals in their respected fields.

If you ever want to know what it really takes to be a top-notch producer/manager or a bonafide fashion promoter constantly planning the next-big-hit runway show, much a fashion week, catch the "The Real L-Word" in action and see if you got what it takes to be a pro in your field.

Since the reality series trailed Mikey from point A to point too numerous to count on her every move, her proposal to Raquel Castaneda on the catwalk during her show was out for everyone to see, especially us fashionistas in the audience.

Sneak Peek! Her proposal is one of the clips in the upcoming tv series. Here is the link that will be aired on Showtime for your Summer time, guilty pleasure viewing in the your air-condition comfort.

Mikey getting on her hands and knees, proposing http://www.youtube.com/watch?v=Laai8l_nxU8.