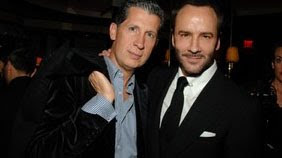 The commands of Conde Naste have been patiently watching the former editor of "Self," "L’Uomo Vogue," and "Esquire," steadily and consistently transform a little Style section of The New York Times Sunday Magazine into a cultural and style bible, T Magazine. That rare upscale but decadent treat of a glossy that successfully buck the recession.

Those folks at Conde Naste's "W" Magazine decided to swoop right in and snatch Stefano as their new Editor-In-Chief this morning. With "W"'s ad sales down 50%, they sense it was time for a change.

The Daily Front Row and numerous publishing blogs have been swirling rumors, tips, and wink-wink hints for weeks, culminating into the confirmination of Stefano Tonchi as the brand new Chief Editor of "W" and a sea of changes for the magazine.

With the shift in leadership, comes an expectation of a fresh persona for "W," hoping that Mr. Tonchi will sprinkle his magical magazine dust on it as he did with "T." This reflects the physical move of the offices from 750 Third Avenue to 1166 Sixth Avenue.

According to the New York Times, he wants to make it less rarified, more accessible, marking the publication's switch from industry-insider trade only rag of Fairchild Publications to the more mass market publications of Conde Nast.

He rides the right social circuit, matching culturati audiences with influential movers and shakers, connecting the dots between Art Basel Miami to the Golden Globes, swinging between the art world and Hollywood.

With the switch in jobs, according to Daily Front Row, comes a new set of bigger and better benefits, from respectable, mid-level perks to privileges that helps him live up to the image of an Editor-In-Chief:

Then: A newspaper salary

Now: A sparkling Mercedes-Benz, a uniformed driver who takes turns slowly
Then: The Ritz (standard room next to Robert Burke)

Now: The Ritz (one-bedroom suite next to Anna)
Then: Front-row at Max Azria

Then: Brioni at wholesale

Posted by thearriviste at 1:23 PM

Really enjoyed reading the blog! I visit www.FashionNewsLive.com and love it! I believe you will too, def. check it out.