Getting your fashion fix from "Les Habillees" by Sundance Channel 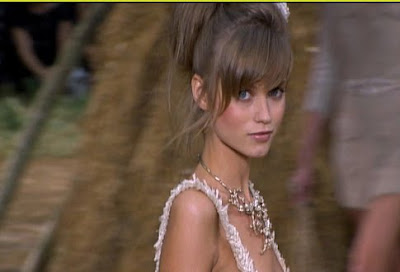 Karl Lagerfeld Show during Paris Fashion Week
Wish those so-called “fashion/style experts” would stop quipping “what’s hot” and “what’s not.”
Yearn for something fun but deep?
Veteran fashion commenter and journalist, Mademoiselle Agnes, with her little buddy, Parisian/LA Bad Boy designer, Jeremy Scott, takes the viewer on a wild whirlwind fashion tour of New York, Paris, and Milan.
Zany but deep, Mlle. Agnes jokes about idiosyncrasies that are always in the fashion industry, dashing from one show to another.
However, designers open their brains and hearts to her, expressing their concerns and the importance of sticking to your guns and how their thoughts come true, whether it be backstage or in the sanctuary of their own ateliers.
The real fun happens when she challenges the French Cultural Minister of not supporting native, young French designers then watching her taking it upon herself, discovering and interviewing the current fresh blood of French fashion-and the lack of recognition and support while the fashion houses-turned-conglomerates dominate the field.

The introduction episode of this 6-part series has Mlle. Agnes overwhelm by New York’s generosity to their young talent in design and media shooting up the ranks. During her interview with CFDA, Diane Von Furstenburg explains the importance of funding young American talent.

Then, she returns to Paris.

Although complaining about the old horses of French fashion, Mlle. Agnes can’t help but have fun at fashion’s expense. Toying around backstage, with a hot male model and an even hotter male designer flashing their 6-pack abs; or irking Marc Jacobs when he’s going to get married or catching Cher in Vegas over the weekend.

With equal parts seriousness mixed with spicy and zany sprinkles, “Les Habillees” will have you craving for more fashion.

Posted by thearriviste at 9:55 AM