Since they've been defining nightmares for a close to an hundred years, for the entire globe, Warner Brothers dove into their treasure troves of horror movies they've been making for years.

Those are the hints that Warner Brothers' "Horror Made Here" haunted homes are made from.

Decorated and curated like individual museums of nightmares, the first one up comes from the true life investigative cases of pioneering and very brave husband and wife demonologist/ghost busting team of real-life Ed and Lorraine Warren, their most terrifying cases of "The Conjuring" and "Annabelle."

"The Conjuring" house is a mini museum dedicated to demonologists Ed and Lorraine Warren's haunting cases, including a deeper exhibit of "Annabelle."  The possessed nun could be a potential Halloween costume.

For those too chicken to make it out to their real-life demon museum, Warner Brothers' "Horror Made Here" copies the highlights of their most spine-tingling cases that are real-world disturbing. 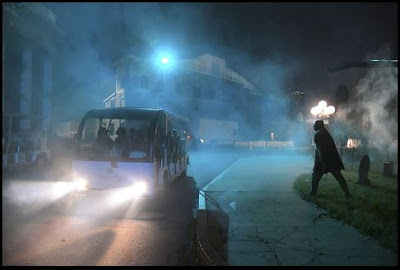 Don't discount the trolley tour for All Hallow's Eve.  "Horror Made Here" trolley ride will take you off the beaten path where you'll encounter Betty and Joan bickering and other stuff hiding in their jungle set...

Speaking of sets...more like homes and attractions, can't forget the high school where Freddy Krueger reigns... 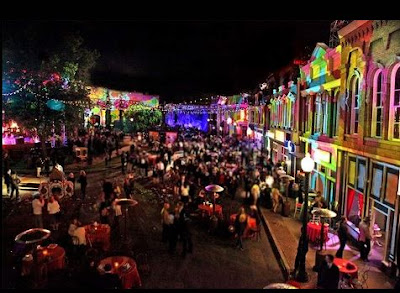 Of course since Warner Brothers is of a certain league, above all other haunted attractions, they can turn their main street backlot into a Halloween carnival, with fried lobster food trucks, (well above cheap disposal candy), ringed with real alcoholic bars and a kick-ass DJ that money can afford.

The biggest, the most popular, is the current hottest hit, Stephen King's "It" attraction.  On the last night, which was October 28th, it drew the longest and thickest line that wrapped around the block, three times over.

Doing a trial run of only Oct 19, 20, 21 and Oct 26, 27, 28, this well-established outlier and misfit prays that Warner Brothers' "Horror Made Here" joins the legion of Universal Studios and Knott's Berry Farms tradition of giving folks a time-honored fright for Halloween.

Posted by thearriviste at 10:03 AM