Rock Out as Your Favorite Rock Goddess or God for Halloween. 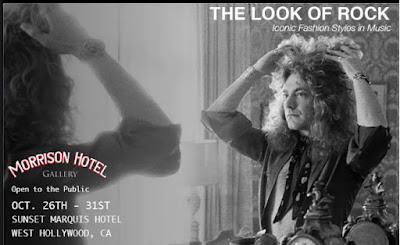 Shoot, use this holiday to become your favorite rock star and get thee to the Morrison Hotel Gallery at the fabled Sunset Marquis Hotel where you will see real celebrities and stars lounging about.

How's that for inspiration?

This scribe has always dig deep into fashion history for Halloween inspiration.  The Morrison Hotel Gallery's current exhibit, "The Look of Rock,"  is no exception.

Morrison Hotel Gallery is excited to present an exhibit of photographs that portray some of the most iconic and influential fashion styles in music history. Rock & Roll has shaped the way society has dressed throughout the years, and fashion has equally influenced rock & roll. From the King of Pop sporting a sequined jumpsuit with capes to Jimi Hendrix layering paisley shirts and bell bottoms of the Hippie Fashion era, all the way to Elton John and Ziggy Stardust creating Glam Rock, fashion has helped shape rock & roll's history.

Bob Gruen, whose work will be on display in the exhibit, said, "Rock & Roll is more than the music. A big part is haircut and attitude, and people show their attitude by how they look. Tommy Hilfiger said, 'Musicians were more influential in the world of fashion than fashion designers.'"
The Look of Rock will open on Monday, October 26th at Morrison Hotel Galley's location inside the Sunset Marquis Hotel, and be up until Saturday, October 31st. It will then move to their location at the W Hotel on Hollywood Blvd., opening on Monday, November 2nd and will be up until Saturday, November 7th. The exhibit is free and open to the public. All images in the exhibit are for sale at each gallery and at www.morrisonhotelgallery.com.
The Look of Rock
Monday, October 26th - Saturday, October 31st
Morrison Hotel Gallery
Sunset Marquis Hotel
1200 Alta Loma Road
Los Angeles, CA 90069
310.881.6025
10:00 - 8:00 (Mon - Wed)
10:00 - 11:00 (Thu-Sat)
11:00 - 7:00 (Sun)
The Look of Rock
Monday, November 2nd - Saturday, November 7th
Morrison Hotel Gallery
The W Hotel
6250 Hollywood Boulevard - Lobby
Los Angeles, CA 90028
323.498.5889
Hours Los Angeles:
11:00 - 7:00 (daily)