Save the Almond Croissants! Save the Parmesan-Truffle Fries! Save La Boulange!

It was a mere year ago, this Summer, that a battalion of food journalists, bloggers, and vbloggers were invited to a feast by a squadron of nervous Starbucks executives, quaking in their shoes, hoping that we food writers would like Starbucks' new stepped-up offerings of gourmet burgers and fries and fancy milkshakes and artisanal sodas with wine, flowing fresh out of the tap...at a brass and marble-counter bar at their new endeavor, La Boulange.

It all happened when the president of Starbucks would drop by a little local San Francisco bakery, La Boulange by a French/Los Angeleno-expat who made his mark in San Francisco, Pascal Rigo.

It was at that grand opening that Pascal gave his life story and early appreciation for Starbucks offering to expand his causal gourmet bistro/bakery empire.

In the Eighties, Pascal used to live and work on Fairfax, baking bread and pastries for famed Eighties Los Angeles restaurants.  Once the Nineties entered, he decamped to San Francisco and founded stand-alone La Boulange until Starbucks offered to be his sugar-daddy in order to diversify their own empire.

We food writers were glad that our favorites became the general public's favorites soon after.

Believe us food writers, we were relieved and glad that our hype and recommendation resulted in bustling business for quality dishes made from high-end ingredients at affordable prices.

We though, actually, we assumed good buzz and bustling business are enough to keep it afloat.

We were wrong.  It was noticed recently, that Starbucks (the very same executives shaking in their boots to please us food writers a year ago) decided to shut down their high-end yet affordable arm because they prefer a quick turn-around in their existing fast-coffee chains than having the patience to watch La Boulange grow and developed.

This writer was dismayed, obviously but further dismayed by how much they diluted the brand in San Francisco.

But here locally in Los Angeles, La Boulange has only been recently discovered by influential lifestyle and fashionista influencers.

Yep, you heard right.  Fashionisa influencers, after building momentum with foodie influencers, that fashionistas followed on "haute hot" world of mouth.  Of course, they fell in love with the Craftsman-artisanal decor and the light and airy spacing, backed up with an interactive menu and the brass and marble counter bar.  Sonoma/Napa wine flowing out of the tap. 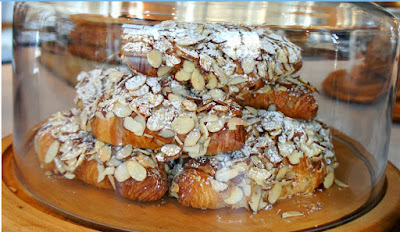 Media and Lifestyle/Fashionista influencers and writers all fell in love with flakey and famed Almond Croissants.  A powerhouse producer said  the brittle, sweet outer layers crumbe away to the inner layers then to the rich almond paste at the center.  Please don't see it go away, sign the petition,

Save La Boulange from Closure by Starbucks 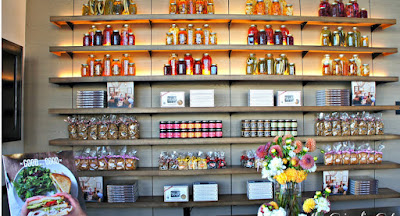 La Boulange is also retail shop where you can buy bags of flaky palmiers, jars of hazelnut spreads and fruit jams, and bags of rich shortbread cookies in chocolate, chocolate-chip and butter. 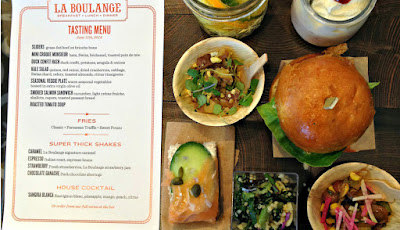 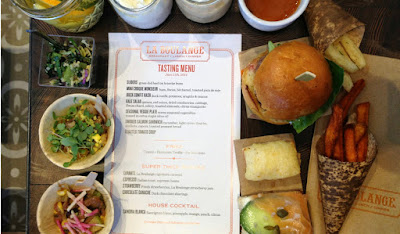 Not to be missed are the gourmet burgers.  After living in LA for a couple of years, Pascal knows Angelenos take their burgers seriously.  This why you should try the Classic Burger in a Croissant Bun. Not to be missed. 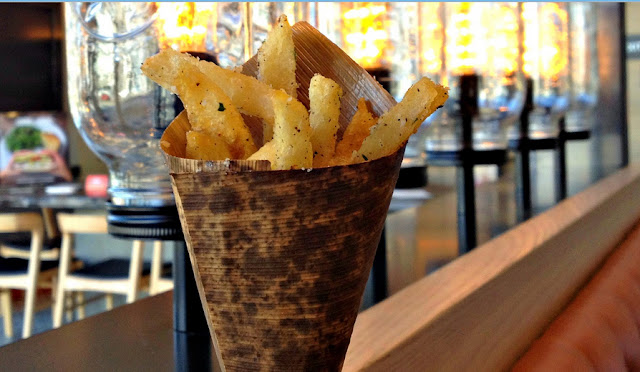 Try the Parmesan-Truffle French Fries.  Since opening, it has gained a legion of loyal fans who have dined and feasting on nothing but baskets of fries fried in truffle oil and sprinkled every layer with crumbles of Parmesan Cheese with berry champagne cocktails and wine from the tap. 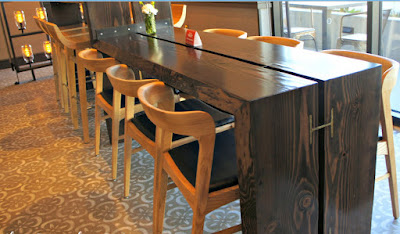 Save La Boulange from Closure by Starbucks

Posted by thearriviste at 1:43 PM