The X Ambassadors & Jamie N. Commons & the Buskers, "Made Underground" Made It at "Made In America" LA 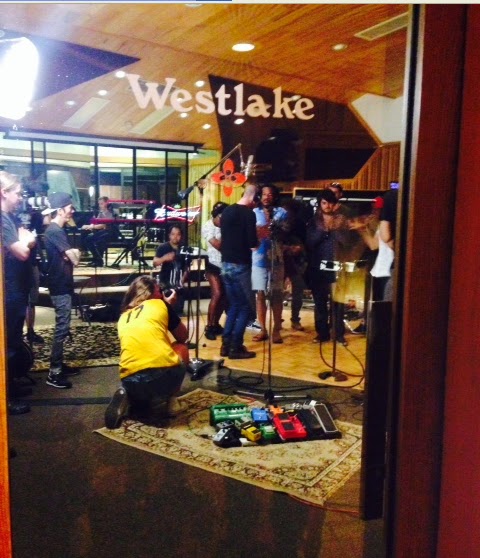 This scribe's "teenage dream" just materialized thirty years later when this scribe embarked on this strange but fun-jammed journey, tracking the song "Jungle" with Jamie N. Commons and The X Ambassadors doing an intimate debut in a Malibu Beach house ("Interscope has Another Stable of Fresh Artists & Budweiser Quench the Thirst for New Talent in their "Made Underground"/"Made for Music" Series.", http://luxurist.blogspot.com/2014/08/interscope-has-another-stable-of-fresh.html) to a even more exclusive sneak peek of the actual recording "Jungle" at the historical Westlake Studios to the finale, officially debuting it onstage at Jay-Z's "Made In America" Los Angeles Festival. 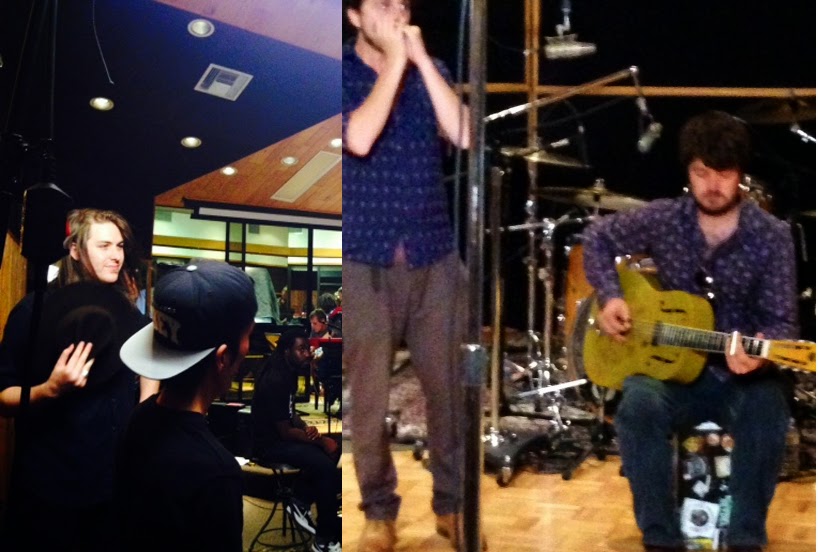 Walking around the corridors of Westlake Studios, denoting the platinum and gold records saying "Michael Jackson, Bad and Thriller" on the wall then Janet Jackson, this visitor and the newest generation of musicians can feel the history here and hope some of that good luck will rub off on them.

In an exclusive, literally, sneak peek offered to creme de la cream of rock journalists, they were a rare inside of glimpse of The X Ambassadors' lead singer, Sam Harris leading the street musicians a.k.a "buskers" in a foot-stomping, impromptu jam of the single, "Jungle."

Then, individual buskers turning turns at the mic, like Graham & Joe doing their blues number on harmonica and guitar...and they're British street musicians.

Tracking the journey of the song, "Jungle," from Malibu to Westlake Studios then onto "Made In America," the next day.  What a trip!  This rare peek into the re-recording of "Jungle" is also a rehearsal for "Made In America." 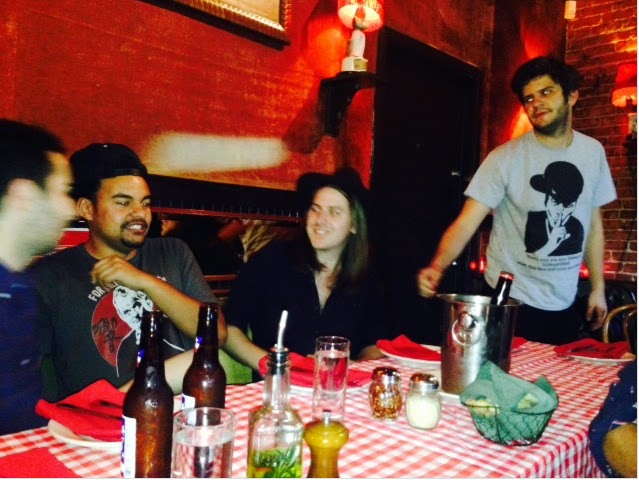 Instead of needy speed dating,  it was a way more relaxed, way more fun, and a hell a lot cooler of getting to know the musicians.  Journalists chatting with them and musicians mingling with their fellow musicians.  Nothing awkward here, just chilling. 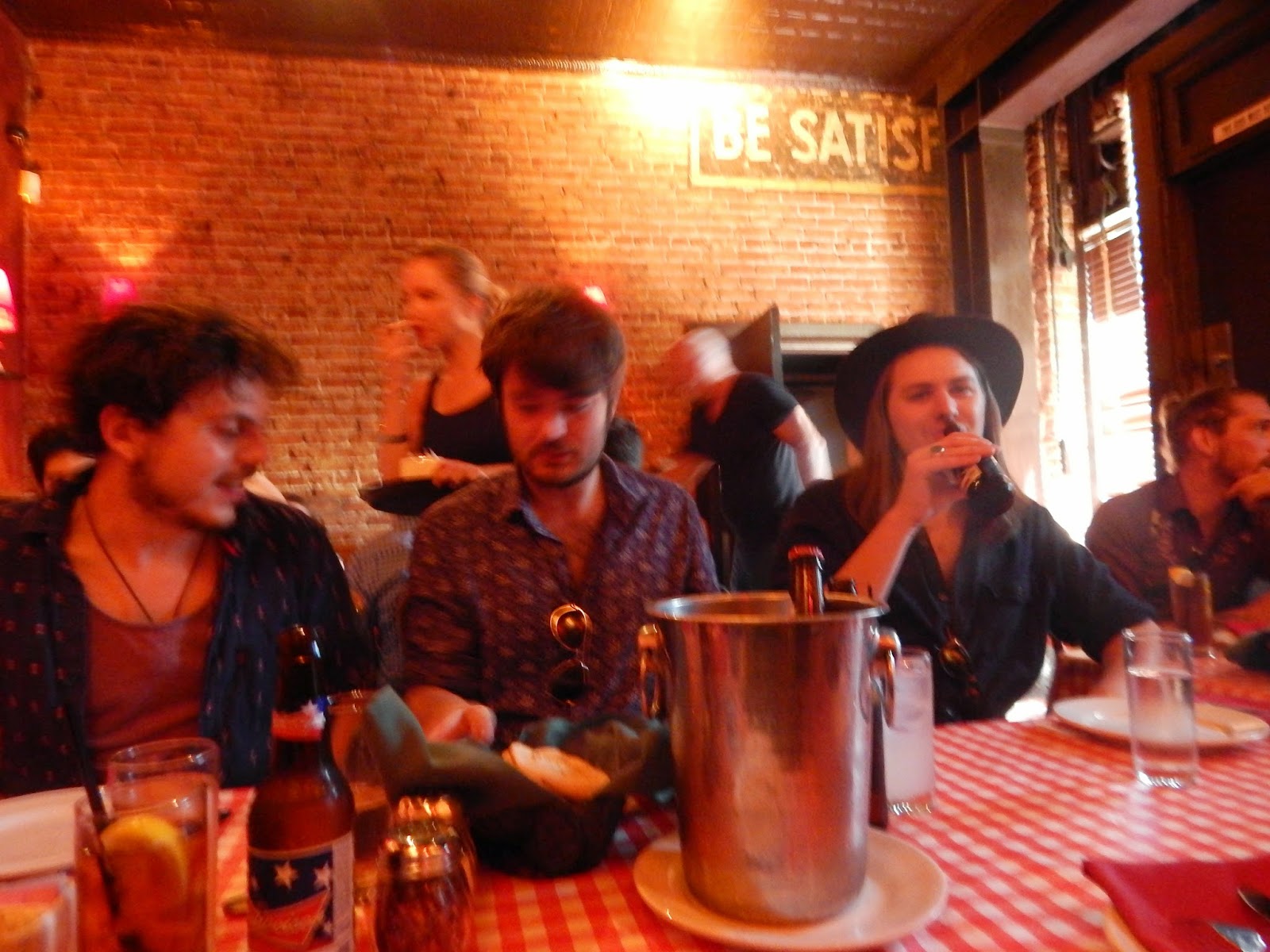 This story isn't just about the song, "Jungle," alone but the story of international street musicians who were plucked out of their home towns by Budweiser's "Made Underground" then granted a wish of recording a song by a top-notch music producer then making their big debut onstage at Jay-Z's "Made In America."

Since half of the "Jungle" band is British, this scribe asked fellow Brits, Folks-Blues duo, Graham & Joe and singer-songwriter, Jamie N. Commons about how it feels from "busking" on the streets of London to be funded, fed, watered, and catered by Budweiser's "Made Underground" series.

All they joked there's nothing like than being beaten by a ten-years old street violinist then taking all that change, after playing for three to four hours, to spend on a Saturday on beer.
Then, in a few years or months, they're here in Hollywood recording in the same studio as Michael Jackson with Alex da Kid and being supported by Budweiser's "Made Underground" series/project.

They casually discussed about they how got here and what it takes then being surrounded by top-notch musicians from all-over the world.

Jamie talked about how hours and years "busking" on the streets train you discipline and tenacity, practicing for fours hours then performing on the streets for three to four hours really hone your skills and durability.

On how it feels from making that big leap from street-performing to performing big festivals like "Made In America,"...

“It’s all the same thing really.”

“Obviously, when you’re playing festivals, it’s daunting but once you get down to it, it’s all the same skill.”

“It’s like playing on the streets. Yes, once you get there, it’s all organized and you get paid but it’s all the same thing.” “Yes, we’re getting fed and watered and stuff…”

“But, as performance goes, the more I do it, the more I want to go back to that.  This is really,…really fun to do.”

“The only thing that taught me really, is that it’s only a hop-skip-jump away, really.  As for the performance, trying to keep the performance from where it started as you cross tangents, from street to major festival stage.”

Being here, having lunch at Jones Hollywood with Budweiser's help...

Jamie reflecting back with gratitude...

The opportunity that afforded Graham & Joe and Jamie, being exposed to different but versatile musicians from all-over the globe...

Jamie, “Yes, it does.  I mean, there are so many good musicians, going into the studio yesterday and recording their parts.  There’s a part of one-man up-man ship going on here, you know what I mean.  I mean look at Marcus, street percussionist from Rio.  He would come in and do drums, shakers, and percussion; and for him, that’s normal and we would be going “whoa.”

Jamie, “The good thing about being a street musician is endless, endless practice.  I mean, you gotta play four hours straight.  Everybody’s technicality is really high because of that.”

Graham, “you definitely put in your hours.”

Jamie, “The standards have been amazing from a disparate group of instruments.  How they all got together working.  It’s a testament to that.  They make it fit in, you know.  They don’t have one or two things to rely on.  They change their way of playing to suit everything else.”

On recording "Jungle" with the street musicians, the buskers....

Graham, “There’s no problem.  Everyone is getting along pretty well.  I think it’s pretty awesome to grab everyone from all over the world and stick them in the same room and work together.  The music unites.  That’s how we do.”

Getting ready and prepped and anticipating the big day, debuting "Jungle" at "Made In America" Festival with the buskers; and the realities of playing music festivals...

Jamie, “Yes, it’s gonna be kinda nervous to see, from a technical view point, twenty-something people on stage.  Half-hour change over.  At Redding, there’s only a fifteen change over with ten people on top. You don’t have time to sound check.  Yeah, it’s a bit crazy.”

These musicians are fan-boys themselves. What Jamie and Graham & Joe are looking forward to at Made In America?

Jamie, “It’s one thing to see Imagine Dragons at Redding.   It’s another to see them at Made In America.” 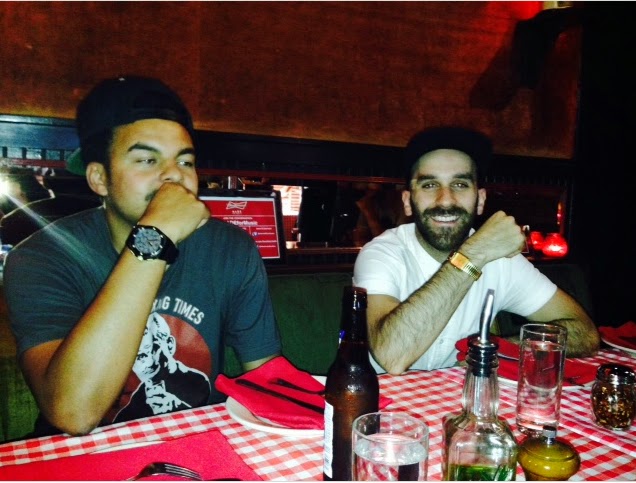 Alex da Kid and Sam Harris of "The X Ambassadors."

Switch over, now it's this scribe getting to know fellow American, Sam Harris, lead singer of The X Ambassadors...

At Jones Hollywood lunch of pizza, beef Panini sandwiches & fries, and kale salad, being fed and watered by Budweiser…

“I need all the calories that I need,” for later and more recording that day and fueling up for "Made In America" concert the next day.

We talked about food and how Americans organized their All-American dishes.

Can’t mix pizza with fries.  Gotta separate the fries and burgers from the pizza.

Sam has proven to be indispensible with foodie-meets-rock.

“I wish I knew more about food.”


Sam, “You know who does have a food show, rapper Action Bronson.  Action Bronson has a great food show, it’s called, “Fucking Good” or something like” (actually, it’s “Fuck, that’s Delicious” on Vice Eats, http://www.vice.com/tag/Action+Bronson and on http://pigeonsandplanes.com/2014/05/watch-the-first-episode-of-action-bronsons-food-show-fk-thats-delicious/). He just goes around to different restaurants; he eats; he goes around to shacks, you know in fucking Missouri and have the best ribs around.  He’ll go around anywhere and eat.  He’s also a great cook.”

Another recommendation from Sam,…

“You know, the Zack Brown Band. Yeah, they travel around with this whole…you know, their thing is this BBQ that goes on beforehand; and they get all these great chefs to tour with them in a bus, with like catering.  That’s the part of their whole thing, too.”

Camilo Durana, Budweiser's Global Sports and Entertainment Director, stood up, wished everyone good luck for the big day tomorrow at "Made In America," and toasted this lunch then told the musicians it's time to head back into the studio...

“Thank all of you for coming.  Obviously, a long week.  Actually, a long set of months.  A lot of hard work to come together, accumulating this week.  First of all, Alex, Sam, and Jamie and all the band and all the musicians from all over the world and the folks at Universal.  Tomorrow is the big day.  So, we’re gonna wrap things soon.  The guys are gonna go back and make sure everything is ready.  Really interested in how weeks of being together will be onstage tomorrow.  Obviously, the release of the track which will be amazing.  Thank you for coming.  We’re real excited about tomorrow.

Both Jamie and Sam agree, touring festivals are different from having their own concerts and sets...

Sam, “It’s gonna be a big day.  We’ve been doing festivals all this past week.  It’s crazy.  It’s a totally different way of doing shows.  It’s very fast and very condensed.  In your face, you know.  Most shows you play, you have 45 minutes.  An hour to get set-up and get your stuff going.  In a festival, you have a thirty minute change-over, it happens so fast but, you’re in front of twenty-times more people."


Jamie, "Yes, it’s gonna be kinda nervous to see, from a technical view point, twenty-something people on stage.  Half-hour change over.  At Redding, there’s only a fifteen change over with ten people on top. You don’t have time to sound check.  Yeah, it’s a bit crazy.”

The big day came and went without an hitch, so this scribe thought. 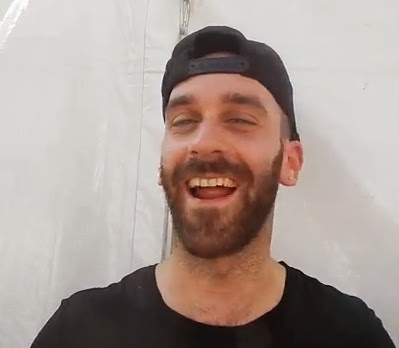 Sam Harris is relieved and happy he made it at "Made In America."

The guys mentioned how intense and squeezed it is but necessary it is, performing at Summer music festivals...

On the dangers of performing under the hot Summer sun...
“It was great.  I threw up on stage.  I got over-heated.  I jumped into the crowd, got back up onstage, felt something then oops. Came back and finished the song.”

We toasted by guzzling bottles of much-needed Gatorade electrolytes.

Posted by thearriviste at 2:39 PM