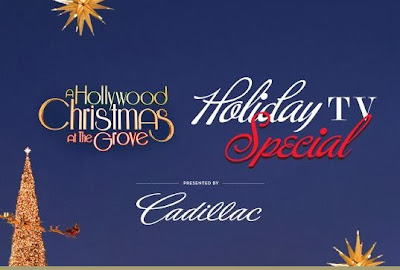 If being gobsmacked by the Glendale Galleria's Christmas Circus of angelic aerialists, Christmas contortionists, and stilt-walking elves weren't enough, today, this afternoon, The Grove is airing live, in L.A. only today and tonight then syndicated elsewhere on Christmas Day itself, its very own televised Christmas special with Mary J. Blige, Toni Braxton, Kenny “Babyface” Edmonds, CeeLo Green, Gavin DeGraw, Il Volo and Jewel.  Entertainment Tonight's host, Nancy O'Dell (Nancy Humphries to you all in Charleston, SC) is hosting this televised Christmas special.

Yep, Il Volo does have a strong fan base, here in L.A. because they're still here.  This time producing at The Grove.

The producer who just did today's Macy's Thanksgiving Parade this morning...and this afternoon is, all of a sudden, back in L.A. to produce this uniquely Angeleno Christmas television production.
The one hour television special will air nationwide between November 28 and January 5, debuting in the top ten markets as follows:

Cadillac serves as presenting sponsor of “A Hollywood Christmas at The Grove,” with Good Earth Tea as supporting sponsor.

Who says Los Angeles doesn't have the Christmas Spirit.  It has tons.

Posted by thearriviste at 3:06 PM