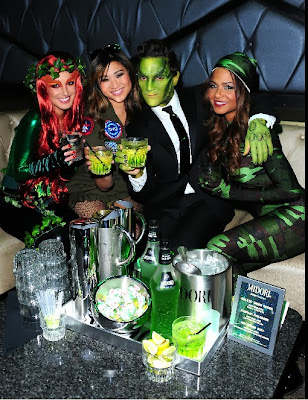 
Sure, Hollywood may have the perks and privilege of getting the jump-start on celebrating Halloween; but they split into two parts, one public, one private with their kids.

Obviously, the Midori Halloween at the retro-hip burlesque nightclub, Bootsy Bellows, isn't for the kids.  Still, it's a great place in a great location for big kids to let down their hair, fly their freak flag, and sip yummy melon-flavored Midori Liquor for one night only.

On Tuesday, October 29th, Midori Melon Liqueur and George Kotsiopoulos, the brand's official Style Ambassador hosted the 3rd Annual Midori Green Halloween Event at Bootsy Bellows in LA, which was transformed into a galactic green empire to pay homage to Hollywood Sci-Fi style. Taking the reigns from Kim Kardashian, George was joined by Jenna Ushkowitz, Christina Milian and Shenae Grimes who made guests green with envy with their emerald green costumes.

Pantone's color of the year - Emerald always reigns in the Midori universe. Our celebrity guests brought their fashion A-game to the green carpet and accessorized with signature cocktails. 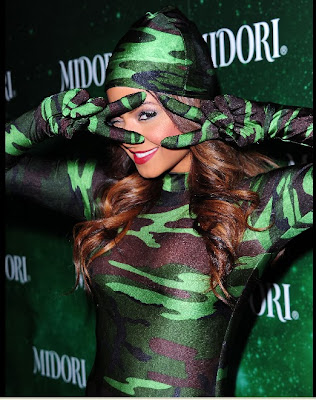 Christina Milian, who donned a tight green army body suit that showed off her toned DWTS figure and talked about Dancing with the Stars and how she can relate to Snooki who shed a few tears when she too was eliminated.  She blended in with the Midori empire in a camouflage green catsuit. 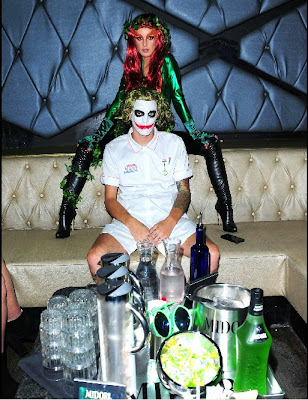 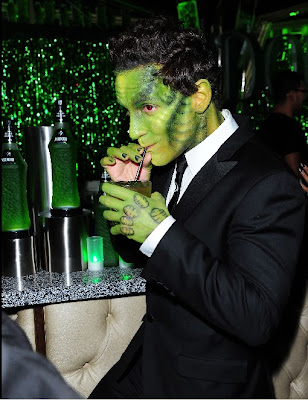 George Kotsiopoulos's makeup was flawless head to toe. His green makeup and red contacts called for a special "alien make-up artist" to perfect his chiseled cheek bones and of course his gills.

Jenna Ushkowtiz went back to the Glee archives to accessorize her Top Gun costume and used one of the army helmets from the set when Glee paid tribute to Tom Cruise classics. 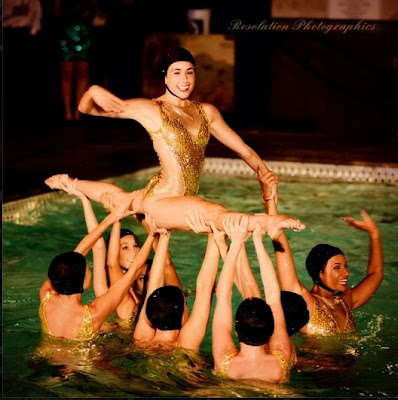 
Due to mass number and attendance, West Hollywood's massive Halloween Block Party gets all the attention, sometimes the wrong kind of attention.

On the contrary, the synchronized swimming troupe, the Aqualillies, proved that celebrating Halloween can be elegant. 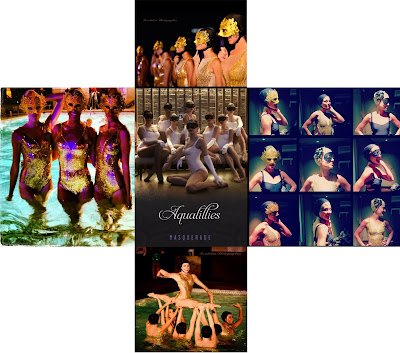 Borrowing the sensual but intellectual "Eyes Wide Shut"motif of macabre on their free invitation, their "Masquerade" hints and leads up to a spectacular revue that the Aqualillies become famous for.

Performing derring-dos in metallic gold bathing suits and glided masquerade masks,  the women tossed and backflipped worthy of a Ziegfield Folly production in water, to a delight of a lucky, selected crowd.

If you're lucky to download both version, consider yourself lucky.  For those who caught it live, shame on you for not filming it then share this thrilling revue with the greater world.

Posted by thearriviste at 11:36 AM