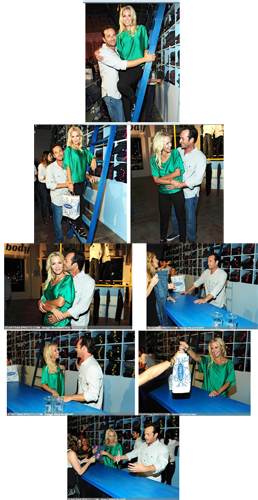 In it's current television ad campaign linking the original "Beverly Hills 90210" with today's CW's "90210," Jennie Garth, now a high school teacher and guidance counselor, still plays the game with Luke Perry and Jason Priestly in the hallways.  She challenges them to wear Old Navy jeans to win her approval.

It wasn't all about just Luke and Jennie but celebrating the end of Summer, returning to school, and beginning of Fall, when everyone gets serious about fashion.

Old Navy threw down a Country/Western Hoe-Down, part denim bar/general store, a crafting station, and a pop-up shop, to help get guests get ready for Fall while letting go of the dog days of Summer...and thank God for that.﻿  Fresh pair of denim for a fresh start for a new season.

Out with pretensions. In with corn dogs and BBQ meatballs.  It's fashion's idea of a country fair...with flair.

At Old Navy, they have a saying, "There's a pair of jeans for everyone."  Guests had their pick of cuts, style, length, and color.  The women's jeans came in the curvy Sweet Heart, the mid-rise Flirt, and the low-rise Diva.  With this myraid of choices, people found that perfect dream jeans right away.  It didn't hurt that Luke and Jennie helped pick the jeans for them.

Another cool thing was the overlooked but oh so adorable glass beer mugs, shaped like an engraved cowboy boot with the Old Navy logo slapped on.

Sure, Luke and Jennie and those ﻿yummy country fair treats may had disappeared into the night.

However, at the corner of Beverly Boulevard and Gardner Street, at 7470 Beverly Blvd. (between N. Vista St. and N. Gardner St.) Los Angeles, CA 90038, a block away from The Grove, Old Navy's Denim Bar is still there today and the rest of this weekend, welcoming the public.

Denim is ripe for picking.