The Other Side of William Rast, Trace Ayala 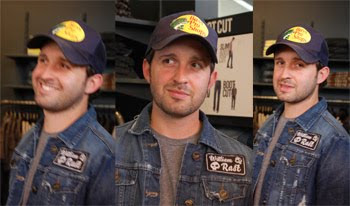 Justin Timberlake's business partner in William Rast, Trace Ayala.
At a recent store event, this reporter was lucky to chat with the man who's Justin Timberlake's fashion business partner-in-crime, Trace Ayala.
We nonchalantly talked about how they started the brand, his sewing background, and doing a little something for Nashville.
Mr. Ayala pretty much describes William Rast as Tennessee Southern Heritage meets Hollywood Style. He represents the more laid-back, low-key but still great quality of being a denim guy while Justin likes wearing suits and slacks.
"I think it’s the perfect combination of Justin and I. He likes to dress up a little more, in suits and slacks. And, I’m a denim guy. I feel like we’re right down the middle. Tennessee Southern Heritage with Hollywood Style. It’s a little bit of Tennesse and a little bit of Hollywood."
This inquistive photojournalist kindly joked about his Pro Bass Fishing Cap as being the next Trucker Cap. We laughed about that. Despite being one of Los Angeles' most desirable brands, Mr. Ayala hasn't forgotten his roots.
"It’s my favorite store. I’m a big hunter and fisherman. I spend a lot of time there." 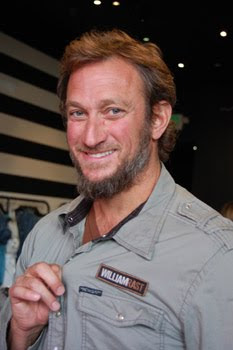 A William Rast devotee.
Growing up learning how to sew as Justin's childhood buddy, Trace used the sewing skills his mother taught him to build the brand as it is known today.
"For me, I grew up sewing and designing and making patterns. I grew up in Tennessee. My mother was a huge, huge sewer. She made up patterns. She pretty much made all my clothes I wore growing up. I would sit up all night, lying down on the floor, listening to the sewing machine going off at night. So, I wanted to learn how to sew. I learned how to sew when I was really young. "
This built the foundation for integrity of William Rast's construction but the concept for the brand was actually born when Justin's entertainment career took off...
"Then when Justin went on tour with *NSYNC , I would make clothes for him to wear on stage. Styling him then he went out with Brittany Spears. So, Brittany loves the stuff. Then, I started making all her stuff she wore. Kinda making all their clothes is where I started."


Trace sewing and styling Justin pretty launch the idea for their own brand-but with heart-felt respect for their roots while taking it forward to new audiences.


"Originally, we always wanted to do a brand since the*NSYNC days. An opportunity arose. We link up with a great denim guy. We initially started as a denim line. Now, we come full-circle as a lifestyle brand."


As for a name that fits their philosophy for keeping it real as a Southern Heritage/Americana brand as it is modern and fashion-forward for our times, they settled on William Rast.

"When we were naming the brand, we wanted something that meant something to the two of us, William Rast. William is his (Justin’s) grandfather’s first name; and Rast is my grandfather’s last name."


The roots maybe Southern but the outlook is futuristic yet practical.


He describes the current collection in stores right now as "Biker Bohemian." The person he had in mind who might want to make some use of this is the "Traveling Guy/Traveling Woman" who propel the "Easy Rider" of exploring the open roads on a Harley and needs cool gear, something tough but stylish, to take her or him anywhere, anytime.

Showing his sewing background, Trace pointed the details making the collection, "A lot of leather with patches. Leather with outer stitching. Distressed flannels." He calls this the "New Americana." 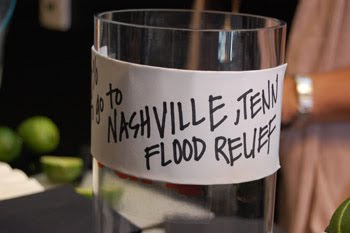 Nashville, Tennessee Flood Relief at the bar.
Due to Mother Nature, they set up an impromptu flood relief at the bar to help Nashville's flood victims. Trace and this writer both felt slightly guilty for being in sunny, dry California while we both know the folks back home are dealing with losing their home, or at least dealing with water-damaged belongings.
"Nashville is our home. I think over 700 homes are now gone which I think is insane."
He and Justin may think of something to help. This little get-together was kind enough to ask people at the bar to donate something for the Nashville Flood Relief.
Still hasn't forgotten his roots.
Posted by thearriviste at 11:00 AM