Coming to you Soon, "Sex in the City 2" jewelry, tees, and sneak peeks! 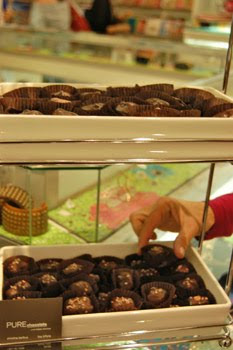 Saturday, May 22nd, at Ron Robinson/Fred Segal is the second launch and the official West Coast launch of the exclusive but approachable and adorable "Sex in the City" charms and necklaces by Dogeared Jewels and Gifts.
Delectable bonbons in nougats, caramels, and the creamiest and crunchiest fudge aren't the only eye candies in today's launch party. There were plenty of eye candy treatments to whet your appetite for the arriving sequel, "Sex in the City 2" movie.
This party not only celebrates this particular jewelry line but also all things Carrie Bradshaw and what she represents the mighty combo of feminine and fierce female empowerment and womanly freedom of expression. Assouline's "Barbie" book profiles Barbie Dolls influenced by the series. This is also the official debut of Candace Bushnell's pre-sequel, "The Carrie Bradshaw Diaries" of the teenaged, Midwestern Carrie dreaming of the Big Apple of what she will become. However, the most important hints are the subtle sneak peeks of the sly, sexy fashions that the women can get away in the modest Middle East in the upcoming "Sex in the City 2." Read on. 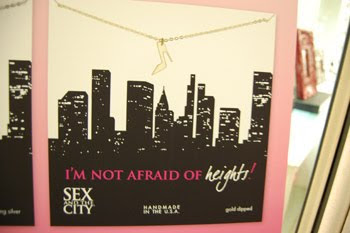 The "Carrie" quote.
With HBO giving carte blanche, Dogeared Jewels and Gifts have full range with the iconic television series (not the approaching sequel yet!) in building this charm and necklace line.
With a purse-friendly prices for established and emerging Carrie Bradshaws, $60 for silver and $68 for gold-covered jewels, Dogeared liberally took quotes from the series to test your "Sex in the City" knowledge, turning this in a quirky and cute Trivia Pursuit. 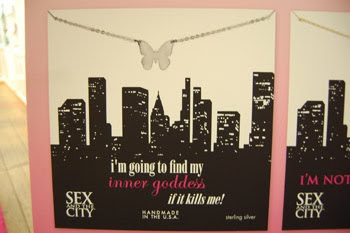 If you match the quote to a character, you'll find your inner Samantha, Charlotte, Miranda, and Carrie.

Mentioned memorably by Carrie's assistant in the first movie, Beg, Borrow, or Steal, has the actual jewelry, bags, and accessories in the sequel that you can actually have your hands on as the same moment as the movie.

Beg, Borrow, or Steal lists weekly and monthly rentals for each piece.

Samantha's Gucci Interlocking shades are at a very reasonable price of $20 per a week or $58 a month. 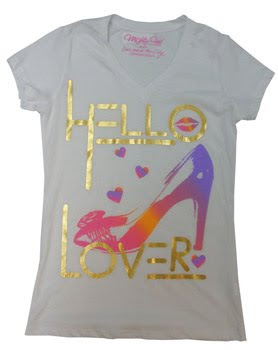 If you're still a "Carrie Bradshaw in-the-making" or in high school with Eighties glam, you can get away with a more casual approach in tee-shirts celebrating the movie, as in Carrie's "Hello Lover!" 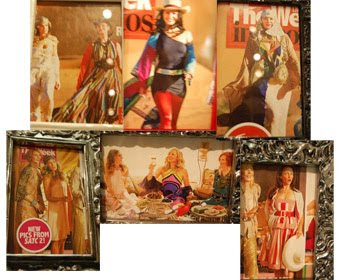 The most startling surprises were the merchandising celebrating the sequel but the photos lining Ron Robinson/Fred Segal's party.
The staff wittingly decorated the store with exclusive photos of the naughty but winking nod to Middle Eastern modesty with Samantha's white leather perforated hijab and thick sweater with cleavage popping out. Charlotte wears an All-American cowboy and Samantha swaddled in robes shielding the ladies from the whipping sands. Sultry Sahara styles indeed!
Expect head scarves and turbans adore and popping concealments for a hot, sizzling Summer!