Camper By Camper Benefit for the Circle V Ranch Camp 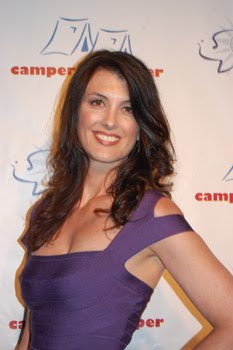 Diana Bianchini, Camper By Camper Chair
The black tie benefit dinner at the Beverly Hills' Four Seasons Hotel was studded with glittering celebrities, such as : Tom Bergeron of "Dancing with the Stars," the classic Susan Blakely of "Southland," and "Project Runway 7" Mila Hermanovski, "NCIS" Pauley Perrette, and a stunning parade of beautiful people.
It's not just about beautiful people, the glamourous gowns and tuxs, and this writer does admit, the scrumptious three-course dinner, topped by the most gourmet s'mores on the planet (and learning there is such a thing as a soda glass as there is a water glass, not the bottle type) but the orbs of beautiful hearts glowing on the red carpet.

This is glamour with a mission, raising funds to send needy kids to camp and repairing it.

The participants cannot emphasize the importance of taking them out of the city and giving them a fresh perspective, there's an alternative to better themselves. That life doesn't have to be what they're growing up in but fresh air and a different scenery can do wonders to a kid's future.

The ever chic, Diana Bianchini, the Camper By Camper chair, went to camp last year with her eleven-year old son, to personally see what the camp has to offer and mostly importantly, what it needs.

She added that this fundraiser is here to one, sponsor a kid and second, fix the facilities.

A former Project Angel Food colleague and friend told her about it. Of course, Diana said "yes."

"Really easy to say “Yes.” I really like to help out kids right here in the LA community. A real sweet, simple idea. It can be really life-changing for them. Get them out of the city or a bad home environment, getting them beyond the city block. "

All of the money they raise that night, goes directly to the kids since it costs $300 to send one to camp and 98% of them need sponsors. 1200 children had benefit from the program. 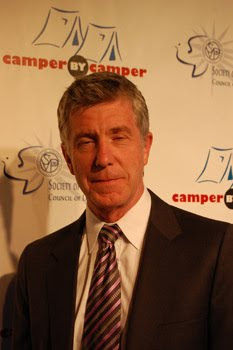 Tom Bergeron of "Dancing with the Stars"

Asking how he got involved, Tom Bergeron said it was through "NCIS" Pauley Perrette, which leads to... 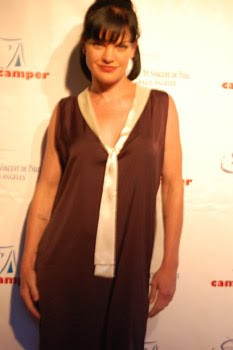 the spunky and sparky Pauley Perrette.

Through the same Project Angel Food pipeline, she got involved with Camper By Camper but with added backstory.

She went to camp all through her childhood and is immensely grateful for that. Now, she wants to give back.

"I’m so grateful I was able to go to camp growing up. I can’t imagine not going to camp."

"All I do in my free time are charities. So when I hear about a good one, I get really excited."

During the dinner itself, Pauley couldn't believe that she went from being a broke bartender with a mohawk in Manhattan to being this awesome actress with a heart. It was a very touching moment. A little bit of trivia, she volunteers at a Hollywood soup kitchen every Sunday and knows everyone on the sidewalk by name. 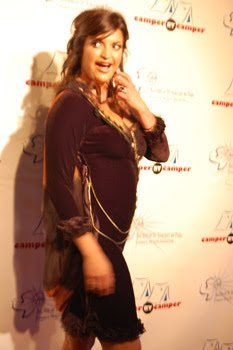 Jennifer Gimenez can pose like nobody else-and she's the one who brings it all home to remind folks what the mission is all about.

Being at the fundraiser has a more meaningful mission for her, "I think it’s a great charity and brings so many kids together. Allows them to have a future and have fun. Grow up together and unite together."

If she only went to camp when she was a kid, it could had been different.

"I think this is so much better than Sober House. These kids have yet to open themselves to drugs and alcohol...I’ve never been to camp. Therefore, I am a recovering drug addict and I didn’t go to camp."

She felt taking these kids out of a bad family situation, putting them in the fresh air and nature, gives them a new and better perspective to improve their lives. That what they endure at home doesn't have to be their future. Jennifer believes going to camp changes a kid's outlook for the better.


Posted by thearriviste at 3:02 PM