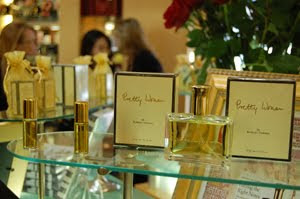 A roller ball of essential oils and full-sized bottles of "Pretty Woman" by Barbara Orbison
Nothing says "Valentine," than the late, great Roy Orbison crooning "Pretty Woman."
Nothing is more fitting for Valentine's Day than a bottle of perfume.
This one comes with a really sweet backstory of everlasting love and history. 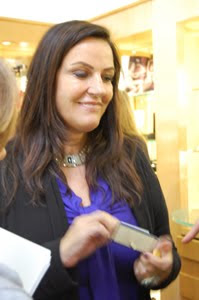 Barbara Orbison, Roy's wife and widow, believes, since she was thirteen years old, that a woman should leave a little bit of herself, a scent of her own fragrance, her own identity trailing behind. This also adds a sheer veil of mystique.

It was this mystique that she had hand blended herself, until now, that people have been bugging her for twenty-two years, from walking on the street to the Grammy's.

Since she made it from scratch, Barbara couldn't tell them what it is and where to buy it; so people thought she was stand-offish, until now.

She drove folks even crazier when the movie, "Pretty Woman," came out and didn't feel like it was the right time and the right reason to release a fragrance.

Working with chemists and perfumiers and waiting for the right technology and moment, Barbara sensed now is the right time to launch "Pretty Woman," a homage to her husband, the late, great rock n' roll ballader, Roy Orbison and her German family of fashionistas dealing in high fashion. 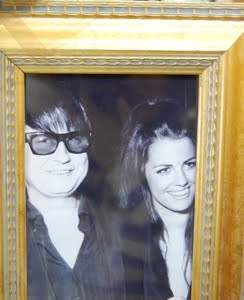 Roy and Barbara Orbison at the very start of their romance.

It's a blend of her aunt's floral, her uncle's amber, and her mother's darker scents that swirled into the perfume she knows today.

Perhaps, it was those scents that lead Roy to her, across a disco, when she was a seventeen years old model and he was touring England. They been together until his death in 1988.

Knowing and studying perfume science, she acknowledges that an individual's skin cells can affect perfume, making the perfume unique to that person's chemistry.

Regardless, it's romance in a bottle.

Posted by thearriviste at 3:57 PM