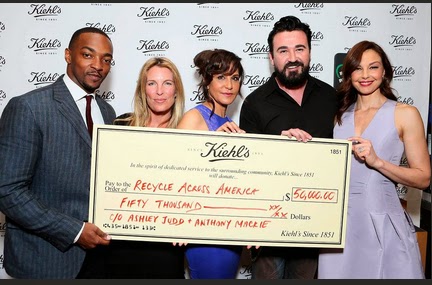 This past, recent Monday was an unusually glamorous Monday night.  If it happens Monday, you sense that party was A-List; and it was.

It was Earth Day so Kiehl's couldn't think of a more opportune time to present a $50,000 check to Recycle Across America, presented with help from that night's hosts, Captain America: The Winter Soldier's "Falcon" a.k.a. Anthony Mackie and the erudite Ashley Judd.

Since its early days as a neighborhood apothecary, Kiehl’s has sourced the world over to bring our customers efficacious, natural ingredients. One of our most recent discoveries, detoxifying Amazonian White Clay, was found at the basin of Brazil’s Amazon River on Marajo Island. When this unique clay was studied by Kiehl’s, the potential benefits of this natural ingredient for skin detoxification and minimization of pores became more clear.

This cleansing white clay is gathered from the mouth of the Amazon River at the beginning of the dry season after months of being nourished by the leaves, fruits, and seeds swept down the river from the rainforest.  Minerals within the rocks of the Amazon River are micronized into mineral clay particles (as well as silt, sand and gravel) by this water flow and are transported by it to Marajo Island where they are deposited and dried in sunshine.

Kiehl's Rare Earth Mask draw out oil, dirt and toxins that clog pores.  In addition of
Oatmeal and Aloe Vera helps to soothe the skin.  This scribe found this helpful after a long night of partying with celebrities.

Speaking of celebrities, the Santa Monica Kiehl's boutique was loaded with all sorts of stars from television and film.  Obviously, everybody's eyeballs were laser-beamed on Ashley Judd and Anthony Mackie but don't forget... 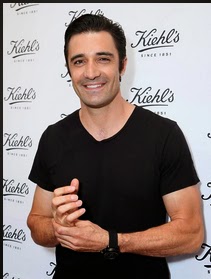 A toffee of an human being, a man, Gilles Marini.  With a tanned complexion of caramelized sugar, Gilles showed he was as warm and sweet as toffee as well, when he kindly sat down and chatted with this scribe about American environmentalism; what his French relatives thought of this; and what makes him happy and grateful...and a friend in common.

"Actually, there are a lot of common things culturally that Americans don’t know. In France, we may not have a lot of things like we do here in America but they do share an interest in recycling and saving the environment."

On being involved with Kiehl’s…

"Of course, I get a lot of free stuff from Kiehl’s.  Actually, whenever I tell my wife I’m going to a Kiehl’s event, she says “I want this.  I want that” because she loves them and that’s all she uses.  Whenever I go, they always tell me what she needs and wants and what my son needs and wants."

"I wouldn’t be here without her.  My family is very important.  My son is fifteen years-old.  I try to  teach him respect and being groomed and being a good person."

Then, we took a break and joked about a friend we have in common.  This scribe did asked Gilles how fluent my friend's "French" was.  He warned me she only knows "bad" words in French.  He was taken aback slightly when I used my two high school and two college French on him; and they were pretty decent for the whole family.

What Kiehl’s product he uses…

"The blue toner for my skin."  It's Blue Astringent Herbal Lotion, http://www.kiehls.com/Blue-Astringent-Herbal-Lotion/250,default,pd.html?start=5&cgid=face-toners, normally called as "The Blue Stuff" especially by male customers who use it both as a toner to control facial grease and as an after-shave.

On sharing oily Latin skin with this writer…

Sure, once we re-joined the party, they were already serving mini raspberry crumb Betties cakes but Gilles was another type of dessert, a personification toffee. Not only in his amber, caramelized tanned complexion but he’s warm and sweet like toffee.

Posted by thearriviste at 1:50 PM