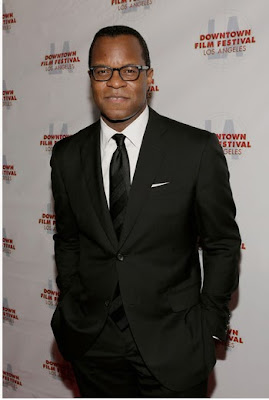 The prominent judges, the actor Adrien Brody and "Precious" screenwriter, Geoffrey Fletcher put their industry perspectives on the entries but they, Bombay Sapphire Gin and Tribec Film Festival are asking the film-fan public to help them pick out their favorite short out of the 5.

The best way to get the most and best votes while promoting Bombay Sapphire Imagination Series contest is to hit the film festival circuit.

At the Downtown Los Angeles Film Festival, Geoffrey Fletcher provides the real kicker.... Unlike the majority of film contests and festivals, he, Adrien, and Bombay Sapphire don't take in any ole film short that is already made.

On No.  To be considered, the contestant has to go to Bombay Sapphire Gin's Imagination site,  http://www.bombaysapphire.com/en-US/imagination-series/year2-competition.aspx to read Geoffrey Fletcher's bare bones of a script.

Geoffrey said the idea of the competition is take his minimalist script, devoid of characters description, names, locations, time, era, scene, or action.  The script is only set with 2 general characters, Characters A and B and a bare total of 8 lines, evenly split between 4 lines for both Characters A and B.  The script only has terse and simple beginning and ending.

It is up to the film-maker to fill in the meat and potatoes of a middle arc and to fully flesh out the characters' names, gender, the situation they're in, the setting, the location, time, and place but their treatment or their unique take has to fit within a 5 minute time frame.

"Leaves enough room for that director to take that character in any direction that the director wishes.  They can make the character human or otherwise.  The pieces can take place on Earth or other places.  Then to really pour their imaginations into this template." 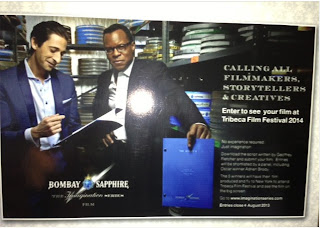 That is the point of the contest, to find the most imaginative script using the basic elements of two character and little dialogue.  By keeping everything else bare bones, you are forcing the film-maker to use their imagination, not a formula.  The general rule is this, using Geoffrey's semi-blank slate of a script, "imagine your version of the script. The scripts will be judged at Tribeca and the five most imaginative entries will go into production later in the year."

Whatever is the most unique treatment, they will pick the most creative 5 treatment then turn them into the most unique 5 film shorts that will be judged cross-country in numerous film festivals until it hits the Tribeca Film Festival a year later.

As a veteran screenwriter and film-maker, Geoffrey cannot help but stress the importance of sponsors, such as Bombay Sapphire Gin and the Tribeca Film Festival,...
"Today, it seems that the tools to express one’s, his or her imagination is abundant but the opportunities to use that imagination in one’s career are very few.  And, here’s the chance to fund new voices.  New voices have always driven and reinvigorated the industry"...

"Many times, I would enter contests and create things that weren’t widely seen but what’s important, was the process in how that kept me inspired and fulfilled on its own.  We all have a lot more imagination in us, we utilized it big and small. I think that one has to go thru the process to realize it’s benefit."

At the Downtown LA Film Festival, the audience had the perk of watching then voting on their favorite film short out of the five films, all based on Geoffrey's minimal script:

None of them is the same.  The themes vary widely.  Each plugs into different genres.  But, there a few common threads running thru them, using Geoffrey's few dialogues between the two main characters: curiosity, a "Pandora's Box/object, a wish, a warning at the beginning, "You might regret it.  I'll take my chances;" an adventure, then a revelation summed up at the end, "Why didn't you tell me?!  Would you believe me?"

Once the screening, the voting, and the Geoffrey Fletcher Questions & Answers session wrapped up, everyone-the staff, Geoffrey, and audience all let their hair down at Los Angeles' hottest and chicest speakeasy, the steampunk hip "The Edison."  This is a much needed re-charge for Geoffrey since he's flying back to New York the next day. 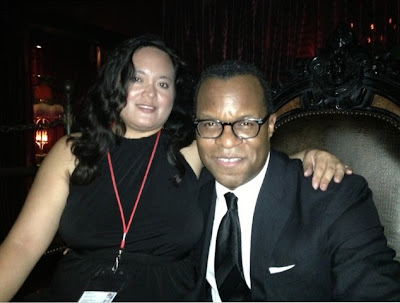 The scribe & Geoffrey Fletcher lounging at The Edison.

No place for jeans, tees, and sneakers but an ideal spot to flash your Jennifer Lopez halter-neck jumpsuit and sling-back heels while re-fueling on Bombay Cocktails and yummy gourmet bites, like sliders and plump prawns. 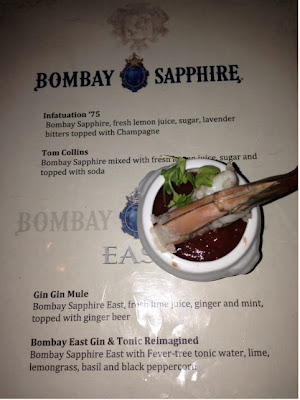 Don't be jealous and don't be miffed if you all missed out on chatting with influential screenwriters and watching cool, quirky film shorts then having a portion-controlled dinner washed down with refreshing gin coolers.

Posted by thearriviste at 2:02 PM