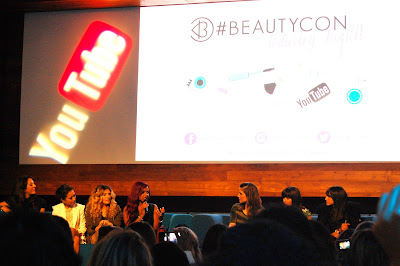 The planets in the Beauty Universe were perfectly aligned for one particular night, the Opening Night of the three-days BeautyCon 2013 conference.

The stellar panel of Bare Escentuals' founder and CEO, Leslie Blodgett, "One Tree Hill" Sophia Bush, and singer, Christina Milan, beauty vloggers Elle & Blair Fowler, and Rachel Zoe Inc.'s  Vice President, Mandana Dayani openly discussed and chatted about how they got to where they are and what their new endeavors are  and how their endeavors are charting their new paths for their next chapter in life.

As the most established and yes, the most matured, Bare Escentuals' founder and CEO, Leslie Blodgett mentioned proudly she is 51 years-old and the mainly twenty to teen audience grasped in disbelief.  Looking at the much younger and accomplished panel, she said when she was in her twenties in the Seventies, she told her mother, she didn't have a clue what she wanted to do with her life.

Beauty/style/lifestyle vloggers, the sister duo of Elle & Blair Fowler are the epitome of this YouTube Revolution.  They stated it all started all very innocuously enough, one of the sisters had a thought, an idea to videotape and the other sister held an household lamp behind her sister's head; and that was the start of their astonishing fame.  For the Fowler Sisters, it wasn't all peaches.  Watchers became fans.  Some became stalkers; and those people caused traffic which made some of their neighbors back in Georgia to leave.  Despite the growing pains, the Fowler Sisters earned enough credibility to move to a more suitable Los Angeles to continue their endeavors.

Celebrities, Christina Milan and Sophia Bush talked about their new endeavors that signal the new stage in life for them.

Christina is using her experience as a talent manager to nuture new hip-hop talent underneath her wings.

Fans among the audience were admirably shocked when Sophia Bush told them that she's embarking on a new app and other technology ventures, going beyond being a starlet and an actress.  She's not afraid to say she has other interests.


Midway through the 3-Day conference, guests were treated to a mid-conference recharge, a pool party mixer at the Roosevelt Hotel because they knew the big day was the third and last day-BeautyCon at Siren Studios on Sunset. 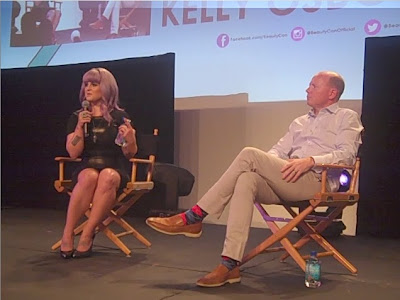 First thing in the morning, a Saturday morning, mostly teen and tween 8,000 girls lined up for 3 blocks long just to sample and try and paint the latest in makeup but to also experience their idols live in the flesh...such as Kelly Osbourne.

Kelly Osbourne's lecture was a continuation of her LuckyFABB LA 2013 appearance back in April.  It was all about self-acceptance when you are and did the best you can in health and fitness then talking those "haters" or naysayers to "F" off.  You can watch the whole lecture at  http://youtu.be/lPCZ7eA2zpc 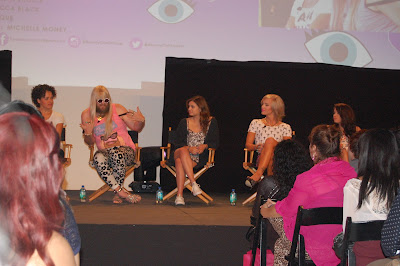 Being "olde-school," Michelle Money and Susie Castillo talked about meeting real-life haters as a "The Bachelor" contestant and a Ms. USA contestant.

Rebecca Black, the girl behind "Friday" song, said she realized who her real friends are when sudden success struck.

What Kelly Osbourne, P'Trique, Michelle Money, Susie Castillo, and Rebecca Black said is that whenever you reach any degree or level of success, it can be small and short or tall and big, you will have "haters" because they're jealous and that's it.

In an earlier panel, "Location, Location, Location," emerging beauty vloggers-cum-entrepreneurs said they're so busy with developing new business endeavors, building upon their new found popularity that they all said they have no social life but they're loving what they're doing and very grateful for the opportunities that arrive with their dedication.

The 2013 winner of NYX Face Awards (NYX Cosmetics is one of BeautyCon sponsors), Missy Lynn started doing makeovers on her military friends and colleague as an creative outlet while serving in Iraq and being stationed in Charleston Air Force Base.  During that time, she never thought that the NYX Cosmetics being sold in the Air Force exchange will be her fair godmother in starting her life and new career as a professional makeup artist.  She said serving in Iraq while two of her brothers died in California was the toughest time of her life and makeup was her only release and distraction from the pain.  Now, she's NYX Cosmetics' Face Awards 2013 winner.  You can watch and listen to her journey at http://youtu.be/ppgi04-93QY.

While covering the beginning towards the end during the 3 days of BeautyCon 2013, this conference goes deep beyond the gloss.  It's all about women starting new lives and paths then mostly importantly, how to deal with those who didn't succeed.  It was 3 days of personal growth.
Posted by thearriviste at 12:51 PM