Suits are Springing Up for Spring 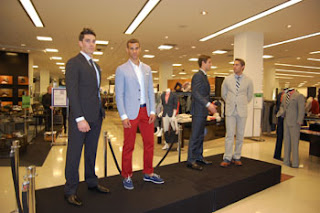 ﻿Bloomingdale's Kevin Harter, the Vice President of Men's & Home Fashion Direction, gave a quick and easy Cliff Notes of Spring and Summer Fashion that the everyday man can understand and use.

Simply stating, thanks to "Mad Men" or a backlash against the overly-tattooed tee-shirt, "Guys are dressing up."

At Century City's Bloomingdale's, Mr. Harter simply lined up the highlights of the current Men's Fashion for Spring that will translate easily into Summer without a beat. 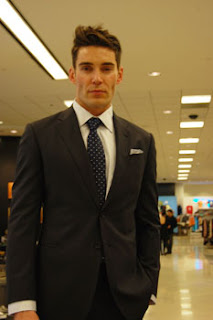 ﻿Concise, straight-to-the point, but no less entertaining, Mr. Harter pointed out what every man already has in his wardrobe, or should have in his wardrobe...the All-American classic, the Navy Blazer, a man's idea of the Little Black Dress, a reliable that can be built upon.

This isn't the typical Navy Blazer in heavy wool for Fall and Winter.  It is redone and revamped for Spring in a lighter Tropical wool, in a crisp texture, that is easier to wear in the warmer weather.

To reboot this wardrobe foundation, he suggests gearing it up by mixing it with patterns and prints to make it pop.

Mr. Harter, "Blazers are really hot right now. So, every guy has a Navy Blazer or should have a Navy Blazer.  We’re telling ya’ to mix it up with  color,…have a little fun with your blazer."

Noticing men are starting to add more accessories to get more mileage out of their blazer...and saving money, he suggests adding on a pocket square, cuff links, or whimsical colors to drive your Navy Blazer forward. 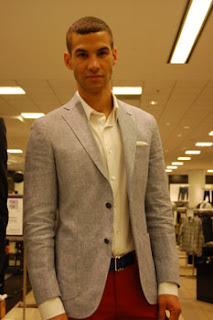 ﻿What appears to be the traditional Summer outfit of a seersucker jacket and Nantucket Red trousers...April's Fool Day!

Up close, Mr. Harter, pointed out is a fine linen Aqua Vita jacket with red Paige denim, a preppy take on guys pairing their blazers with jeans.

He calls this ensemble, the "fresh and casual" look, sprucing up your basic tee and jeans by topping them off in a breathable linen jacket then reworking either the traditional Nantucket Red trousers or the basic blue jeans by mashing them all up into Nantucket Red jeans by Paige Premium Denim.

Harter also quoted that this outfit is a twist on the preppy look.  This outfit is inspired by the Fifties thriller and movie, "The Talented Mr. Ripley," the jet-setting prepster soaking up the "La Dolce Vita" in Italy, Americana with an European flair set in the Fifties. 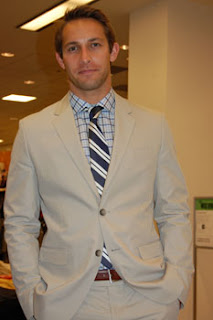 ﻿Cannot leave the comfort of khaki?  No need to worry.  Mr. Harter understands, "I love guys dressing up but for a more casual look."  Suits never mean uptight or formal, just leaner, meaner, and sleeker.

The Khaki Suit for Spring is done in cotton, lighter fiber in a light color, guys can relate to that.  Dressing it up with a pair of saddle shoes is the continuation of the Fifties trend.

Loving the saddle shoes for Spring, he adds that Cole Haan did a terrific Spring shoe collection with five or four color ways with these shoes.

See, Mr. Harter proves that easing into Spring and Summer need not be stuffy or stiff.  It is all above rebooting the classics into different, lighter fabrics then driving more mileage out of the basics with accessories, such as pocket squares and wacky socks.

Bascially, just have fun with your suit.

Posted by thearriviste at 12:47 PM