For only one Saturday, Beverly Hills conjured up a smooth-running, sleek, and well-coordinated fashion festival, albeit only for one day, that was as coiffed and chic as its namesake.

The staff, the management, and the layout is reminiscent of the days of yore when IMG run Los Angeles Fashion Week with Fern Malis at the helm. 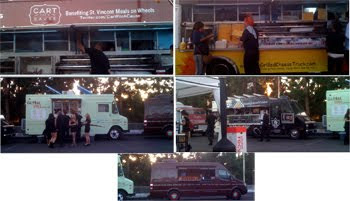 The late afternoon-to-mid-evening schedule of select brands and designers were a mirage of the greatly departed IMG/Los Angeles Fashion Week but the white tent was Oscar gifting suite worthy.

The red carpet lobby had enough room for plush, black and white curved banquettes, worthy of Hollywood Regency revivalist, Kelly Westler, one of the many celebrities attending and socializing under the tent.

The Santa Monica Boulevard and Wilshire lot provided enough for an array of gourmet food trucks so no one went hungry. Something the late Los Angeles Fashion Week and following one-offs never bothered to include in their alcohol-fueled events. The Hello Kitty rose champagne was balanced by gourmet grilled cheese sandwiches and truffle popcorn.

A-list celebrities, such as Paul Sorvino, Carey Mulligan, and Kelly Wrestler chatted with the host and one of Beverly Hills Fashion Festival organizers, Jonathan Antin.

Mischa Barton debuted her party-friendly line of handbags, http://mischabartonhandbags.com/, as one of the vendors in the lobby. Her adorable Sue Ellen pouch with a clasp and the mesh handle is a great choice to a clutch.

But this afternoon-and night-they were there just to watch the real stars of the day, the designers showcasing their wares. The concept behind this collection was as though Justin and his buddy, Trace, made a road trip cutting through the Southwest, what Stylesight calls, "Tribal Winner."

Fringes swung as the rough and tough models sashayed. Navajo blankets and weaves are scarves. 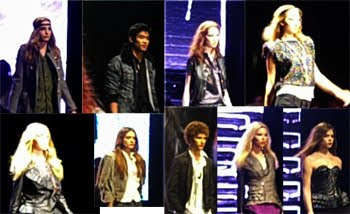 Headbands around the forehead replace prim and proper handbands.


The William Rast mainstays are still in place, the reinterpretation of the motorcycle jacket. It morphed into a sixteenth century doublet, with wrap placket and ruffled trim or a cropped doublet with puffed sleeves, then a shiny patent-leather baseball jacket.

Folks can't beat William Rast when it comes to the leather jacket in all its forms. They beat the stiff motorcycle jacket out of its stuffiness.

Remember, this is Justin Timberlake's brand. They opened the show...with a show. Hip-Hop and street dancers, in various shapes and sizes but still early twenties, strut, hopped, twisted, and slither in the line, making the tight, black clothes look comfortable.

Even though Justin didnot make an appearance, the man who actually crafts and sews, Trace Ayala showed up and did an interview with Heather Petrey on http://www.lafashionsnob.com/.

The bold shouldered military coats and military chic parkas rounded out the collection.

This show only whets this scriber's appetite when William Rast for Target hits the mass retailer in time for the holidays-yuuuuuummmmm.
Posted by thearriviste at 12:34 PM