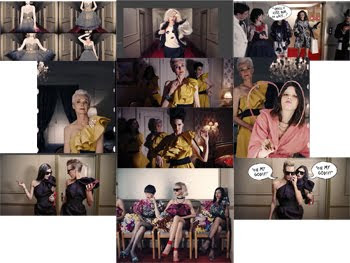 Watch the full video at http://www.hm.com/us/designer#/designer/

If there is a certifiable way to keep your figure during the holidays, this will be it...Lanvin for H&M before Thanksgiving.


In the film, you have two women wearing the same black dress with ruffle straps. Then, you have a mother and daughter team, with another woman, wearing identical one-shoulder ruffle cocktail dresses, dancing, prancing, and posing. The mother makes it fierce.


Towards the end, as one woman doffs off a chic zebra striped trench coat, she unveils a black shift dress that another woman is wearing.


These montages prove that one, you are never too old or too young to wear a Lanvin.


Second, this limited edition capsule collection is for everyone and should not be ashamed if you catch someone else wearing the same dress. Something most party girls with limited choices know all too well on New Year's Eve. 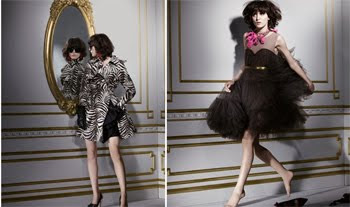 Zebra Trench Coat can be paired with the black full dress with the nude bodice.

Alber Elbaz, the man who revived one of the oldest design houses into the twenith-first century, is bringing his haute couture fashion to the masses-his ardent fans who had always dreamt of his creation but could never afford them.

Well, on November 20th, they can. That is when H&M is going to release the limited edition collection to the people who will actually wear them because they need something glamourous and attainable for Christmas and New Year's Eve.

Yes, there are a lot of ruffles in this collection, as much if not more than a bag of Ruffles Potato Chips. However, those complicated pleating and ruching is time-consuming which translate into expensive.

Thanks to the fashion-forward, mass retailer, both women and men can get their hands on not only great tailoring and engineering but some oh-la-la pumps in zebra stripes and bows, shoes, tees, tuxedos, and blazers, with a fabulous faux fur jacket to spice things up.

There is even a pleated shift dress with a loose multi-tiered, ruffled boatneck that can be worn up for a demure look or droop one side of it for a more sassy style. Two looks in one piece. It comes in hot pink, purple, and of course, reliable black. 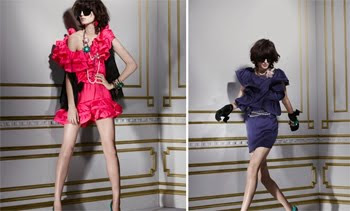 H&M is going to celebrate the Lanvin Launch on Friday, November 19th as the grand opening of its Caesars Forum Shop, from 7pm to 11pm.

This Mr. Elbaz's way of bringing the fantasy of haute couture as luxury to all.
Like the holidays, better catch this designer dream before it all disappear as a sweet memory.
Posted by thearriviste at 5:11 PM