Forget Haunted House, How About a Real Guilty Treat?! Popsugar's E! True Hollywood Stories House for One Day Only!

Fall's cooler temperatures causes us to huddle inside, whether in front of a roaring fireplace or the tv or watching tv on your tablet, in front of a roaring fire.  It's time for good, juicy stories in whatever.  So, snuggle back in your cozy PJs, with your mug of hot cocoa and apple cider then yourself with early Halloween candies and treat yourself to...E! True Hollywood Story returning Sunday, Oct. 6 at 10 p.m.!  It's true...E! True Hollywood Story is coming back with the first episode on how sex cult, NXIVM, with Catherine Oxenberg describing how it took over Hollywood and her daughter.

In this clip from the season premiere of E! True Hollywood Story (airing Sunday, Oct. 6 at 10 p.m.), Catherine Oxenberg shares the struggle she faced when choosing to walk away from NXIVM. After a nearly two-year involvement with Keith Raniere's purported self-help program, the Dynasty actress reveals she was ready to walk away.
"I didn't want to give up my life for these people," Oxenberg notes in regards to the since fallen cult. "I wasn't interested in being part of their community."
Sadly, her daughter India Oxenberg didn't feel the same way. As India took more NXIVM courses, Catherine says she became "concerned about the amount of money that [India] was spending."
"She said, 'Look, Mom. I never finished college. I consider this the money that I would've invested in my education!'" the 58-year-old actress reflects. "What can you say to that?"
Unfortunately, NXIVM was not the self-help program it was advertised to be.

This week E! announced that the documentary series is heading back to the network with all-new episodes. The show began back in 1996 and now current pop culture icons, events and movements are going to get the True Hollywood Story treatment. So which celebrities and major pop culture moments are so massive and influential they need to be dissected THS style?  They have gotten a few suggestions...
Focusing on the hidden, darker, behind-the-scenes lore of past and present, E! True Hollywood pulls back the curtain.
Some fans on social are saying that they should shed some light on the cast of Glee and the lives of the stars after the hit Fox show wrapped. Others are suggesting they focus on the #MeToo movement. Both of which sound like great investigative pieces.
Other Hollywood subjects who would make compelling episodes of True Hollywood Story include Girls Trip's breakout star Tiffany Haddish, the always controversial Kanye West and Justin Bieber and Selena Gomez's timeless love story. With the recent tragic death of Swedish DJ Avicii, perhaps you'd like to see an episode about his life and death too?
Kesha, Meghan Markle and mother-daughter duo Debbie Reynolds and Carrie Fisher have all also had fascinating stories. Then there's the true stories behind the world's most popular boy bands and girl groups (we see you One Direction, Fifth Harmony and BTS).
To get you in the mood, E! team up with Popsugar for their fun house collaboration.
In partnership with POPSUGAR, E! is treating True Hollywood Storyenthusiasts past and present to an immersive, exclusive behind-the-scenes look at the show's upcoming episode lineup with a pop-up exhibit aptly titled, "E! True House of Hollywood." The event is set to take place Saturday, Oct. 5, and will run from 12 p.m. to 7 p.m., so attendees can make the most of its three-dimensional treasures.
Celebrating the new THS season as well as the real-life stories that inspired it, "E! True House of Hollywood" will saturate its guests with pop cultural content from all sides. And courtesy of its spacious locale—the exhibition will set up shop inside The House on Sunset, one of West Hollywood's iconic art and event venues—it promises to do so with authenticity, flair and impressive detail.

Following a mock "red carpet" portion to launch visitors into the wild world of celebrity upon first entrance, the installation will lead patrons through a series of rooms, each of which bears its own individual theme. Appropriately (and following a sort of haunted mansion format, but without haunts for the most part), each respective theme corresponds to one discussed, explored or otherwise featured in THS' jam-packed forthcoming season.

The installation highlights three specific THS episodes airing this fall—"Does Hip Hop Reject Women?," "Horror Movies: Cursed or Coincidence?" and "Is Fame an Addiction?"—and aims to bring them to life with decor and ambiance plucked straight from the series itself.

Step into a neon-lit recording studio and snap a picture behind the turntables. Venture into a wallpapered living room setup complete with fuzzy TV screens and a whispering doll collection sure to give you the chills. Finally, watch the "rumor mill" take physical form in a room touting floor-to-ceiling tabloid headlines.

So, what're you waiting for? Reserve your spot now via the "E! True House of Hollywood" General Admissions page. All it takes is an RSVP!
E! True Hollywood Story returns Sunday, Oct. 6 at 10 p.m.! 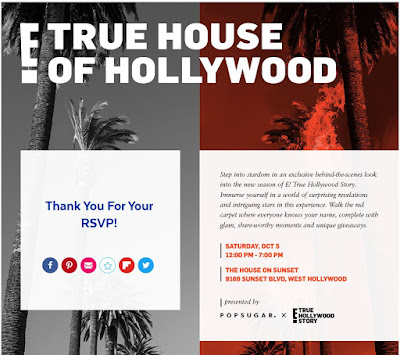