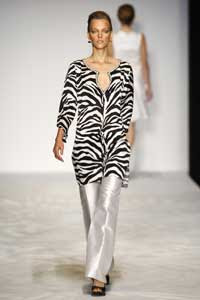 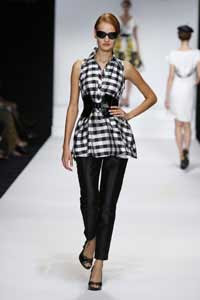 In an exclusive interview, Mr. Kevan Hall, Vanessa Williams' favorite red carpet fashion designer, offers insight into what goes into bring a fashion collection from concept to runway to store.


For each and all collections, whether it be his current Spring 2009 Collection, "Stage Door" or his previous smash hit, "The Masai" Collection.


He always starts with an inspiration. Then, to gain the correct historical or cultural information, he does research.


He was further intrigued that Mr. Gilbert or simply known as, "Adrian," took his personalized studio couture into high-end ready-to-wear. His influence trickled down into mass production and major fashion trends, setting the style for the Forties and Fifties. In turn, influencing the style and mood of the AMC's hit tv series, "Mad Men," which influence the current set of present-day New York designers, as in Marc Jacobs, doing his own intrepretation of Adrian.


Mr. Hall learned Adrian did eveningwear in gingham, influencing a Califorian sportswear/contemporary designer in the Forties and Fifties, Claire McCardle. She followed suit, using gingham in sportswear, making it a popular pattern in the Fifties. 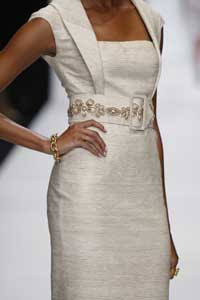 Lurex-infused wool steath dress
Armed with the history and information, these set the upcoming collection's tone.
Unlike most brands, Mr. Hall does all the sketches himself on a set of croquis. Croquis are pre-drawn patterns of the human body of different genders and ages that are anatomical correct. By sketching around these accurately measured figure patterns, he can see how realistically his sketches are. 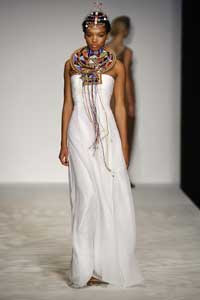 White Kalaris Gown with Ceremonial Neckband from the "Masai" Collection

From there, he shops for fabrics that will fit the theme of what the collection is.

Once Mr. Hall buys all the fabrics he needs, he works with his pattern-maker. They start to see things, the draping or the flaws. Eventually ironing out the kinks, they design the blueprint of every outfit that is going to be in the line.

When Hall approves the designs, he assembles his team in his atelier, his workshop and waiting room, more pattern-makers, the sewers, and his assistants. "I can't do everything."

They start to cut and sew the real sample garments people will eventually see on the runway.

This is where the merchandising begins, when Hall starts to plan his fashion show. If he is not showing during a fashion week anywhere on the globe, Hall displays his collections in charity benefits or do a traveling trunk show at Neiman Marcus at a town's or city's best boutiques.

While his team puts the line together, Mr. Hall figures a sexier look and cut for publicity for the runway show.

However, for a more intimate trunk show, he shows more realistic proportions and cuts to the retailer. Hall also has the flexiblity to present his garment in a multitude of looks, pairing a blouse with a trouser or a turtleneck or taking a complete outfit then breaking it into separates. The ways a real woman picks and puts her wardrobe together.

When it comes to selling to women, his advice, be realistic when selling to real women.

Based on his observations, Full Frontal Fashion TV host, James Aguiar commented Mr. Hall knows the importance of the press and buyers at a fashion show.

Depending on the level of each show, either Mr. Hall or his assistants personally meet and greet the customer or the client. 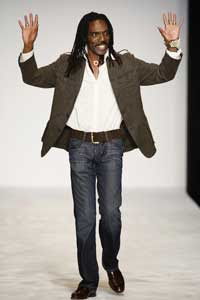 The man himself, the classy Kevan Hall

Mr. Hall has a loyal and steady following among fashion-conscious but not trendy-hungry women of a certain age.

Mr. Aguiar added he is the leader among the current crop of Los Angeleno designers.

His selection in design and fabrication have made his creations timeless pieces that still generate heat and popular demand.

He sent it out to Tunsia for an "O" Magazine shoot then it went missing in action. He plans to track it down and get it back because so many people still seek it.

Oh well, remember Mr. Hall's mission statement every time he releases a line, "Love for all things glamorous and luxurious".

Posted by thearriviste at 11:58 AM