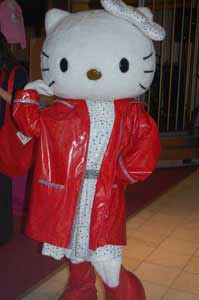 December Fourth, at the Beverly Hills Hilton, the generous cancer and AIDS charity, Project Angel Food kicks its much anticipated and much beloved 50% Off, 70% Off, 80% Off, and 90% Off Divine Design Sale, a yearly fundraiser where people shop for never-been worn, never-been used designer overstocks from brand name designers such as Marc Jacobs, Diane Von Furstenberg and cosmetics from Smashbox and Jouer and top of the line furniture from the most stylish furniture design companies.
Every penny spent during the four days sale extravaganza, where a pair of black ribbon $ 395 Marc Jacobs mules can be had at song for $39.50 in ten different sizes and Diane Von Furstenberg's impeccably modern class silk wraps, normally retailing at $200, can be snapped up at $20 a pop in jewel tones, goes straight into the charity itself. No middle man. None of the donating designers and companies partake any of the profits.
Since these companies donate their overstock to make room for their upcoming collections, they use it as a tax write-off, therefore cannot profit from the charity sale.
All of the profits quickly goes directly into the charity's kitchen and ingredients where celebrities such as David Arquette cook fresh, hot meals for cancer-and AIDS-stricken women and their children who are too sick to shop and cook, and whereas Hollywood socialites such Eric McCormack's wife, Janet, personally delivers hot lunch and dinners, driving all over town, for sick people. 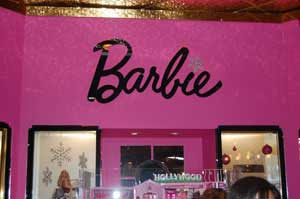 The sale highlights were Mattel's Barbie Lounge, a fuchsia pink wonderland of all things Barbie. They were good-hearted enough to donate their top-of-the-line high-end fashion Pink Label, a bevy of Brunette Barbies, yes, Brunette Barbies reflecting the current demographics of multi-ethnic Hispanic/Asian-American girls in their toddler years to tween who love anything fashionable and anything pink. Why should the traditional Blond Barbie have all the fun?
Even blond girls want a Brunette Barbie. 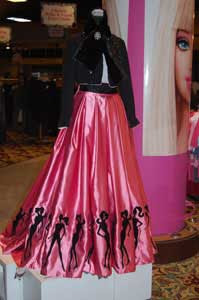 Barbie Collection Black Bolero Jacket with Hot Pink Full Skirt with Barbie Silhouettes
During the Opening Night, where actor and rocker dads, such as David Arquette and Motley Crue's Vince Neil, besieged the Barbie Lounge for their daughters, and the first two days, the 50% Off Friday then 70% Off Saturday, the Barbie Lounge was practically cleaned out. Save for one lone Miss January Garnet Brunette Barbie with Latina features and caramel skin and eyes, which this writer got on 80% Off Sunday at $10, Mattel's Barbie Lounge was a sold-out success!
Unless you are a fashion industry insider, Barbie does an adult-sized collection of Barbie inspired fashion line meant to be worn by adult women who never outgrew their love for Barbie. Anna Sui did a linen peasant blouse with hot pink ribbon trim. Diane Von Furstenberg did her iconic wrap dress in hot pink wood grain print with a matching luggage collection.
The black velvet bolero cropped jacket with the hot pink full skirt with the embroidered Barbie Millicent Rogers (yes, that is her full real name) silhouettes is part of the adult Barbie Collection to be auction off-and someone did bought it! 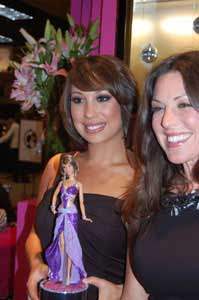 Mattel also did a limited-edition Barbie of "Dancing With the Stars" Cheryl Burke. She never thought in a million years, Barbie would do a doll of her.
This Cheryl Burke Doll was in a silent auction to further benefit Project Angel Food. 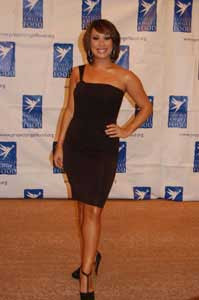 "Dancing With the Stars" Cheryl Burke in a David Meister Dress

This gala is on equal standing of Manhattan's charity benefits at the same time, the Christmas/Hanukkah season where both cities burst out with the best balls and the most glamorous parties, all raising money for each cities' most needy.

Project Angel Food's Divine Design Sale is a win-win event where healthy people can get the best quality gifts at the best prices (70% to 90% off the retail price, cannot beat that). By doing so, they pump money into the city's most neediest people who deserve care and compassion in a time for giving.

With a constellation of stars shining their patronage, they believe this is the time to use their star wattage to power the time to give. They are aware of their influence. If they are out and front supporting a charity, maybe their fans and normal citizens will follow in their foot steps.

Ms. Burke, in a curve-hugging but very comfortable David Meister dress, says this is a wonder cause. "It helps people who can't help themselves."

Ok, she's a normal gal. "Because of hectic schedule, rehearsing, dancing, and touring, never have time to shop. I need a good night to shop."

With these deep-discounts, there could never be a better night and days to shop! 50% off with A-List Hollywood celebrities-why not! 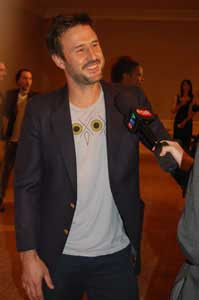 David Arquette being interviewed by Canadian TV in his own clothing line, Propr.

For David Arquette, social activism is a part of growing up. His mother marched with Martin Luther King. Working in soup kitchens, whether it be for the homeless or the seriously ill, cooking up made-from-scratch, hot meals is second nature for this kind-hearted soul. Don't let his light-hearted goof ball appearance fool you, there is something warm and deep about this man. No wonder Courtney Cox married him.

While being interviewed by Canadian TV, he stressed the other charities he works for, Feeding America, the largest food distributor in America for cash-strapped families. They provide two million pounds of food a year.

This charity has its own fund drive.

He recounted this funny story of he run around during a Lakers game, pleading with fellow celebrities to autograph a tee-shirt for Feeding America's "Clothes Off Our Backs" to raise money, without being kicked out by security.

He calls these charities amazing, beautiful work, providing love and food, supported by donors and volunteers.

A man so goofy that he's sweet. A man who puts where his heart is. 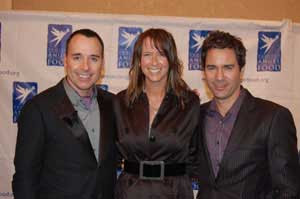 He would never allow people to forget the organization's mission, whether it be cancer or AIDS, sick people need proper nutrition and a well-rounded, healthy diet so their medications can work faster and properly.

Mr. Furnish is very disappointed with the shrinking attention on World AIDS Day and the AIDS rates in Africa and India.

By appearing as Project Angel Food's honoree, he wants to use his star wattage to remind people that AIDS is now a worldwide cause, not just in America.

Project Angel Food has been Eric's and his wife, Janet's main charity for ten years.

Mr. McCormack is not afraid to state Project Angel Food has expand its scope from gay men with AIDS to anyone with a life-threathening illness. The organization's latest focus are women and children with cancer.

To increase volunteerism year-around, Mr. McCormack offer these tips, "Very easy to show up. Just show up. You don't have to be rich." 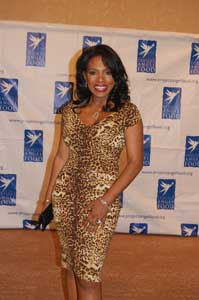 Ms. Diva, aka, Sheryl Lee Ralph, says Project Angel Food is near and dear to her heart.

"When I first moved to LA, I noticed this church. One day, my car broke down in front of this church. I realized it's a charity kitchen. It's Project Angel Food. Now, I am proud to say I am a board member."

Because of their undying kindness to the sick, poor, and discriminated, Ms. Ralph formed an off-shoot charity of her own, catering to African-Americans suffering from AIDS, "Divas Simply Singing," where she wrangles other predominate divas into giving concerts to raise aware and funds for her charity.

She cancelled a gig that night to attend this gala, "Create Divas Foundation. We're the ones to drive this infectious illness away."

She is also here to cheer on her long-time friend and designer, Tadashi Shoji. Ms. Ralph, "Tadashi said, you need some clothes? Been my designer for stage since then." 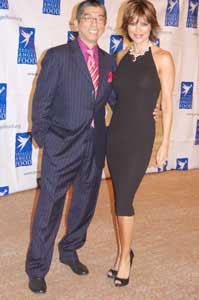 "Ten years ago, I donated all my birthday gifts, on my birthday, to Project Angel Food."

In a charitable spirit for this time, Lisa Rinna decided to be chicly subtle and thrifty. When asked who is she is wearing, she gladly stated, "I've been shopping my own closet this year. This is a vintage ten years-old Dolce & Gabbana. Less is More." She discovered this gem in the back of her closet and believed this is still good enough to wear, an classic investment.

When it comes to selecting your charity, "You have to be careful. Do your research. My first charity was the Carousel of Hope."

"It's all about giving your heart and soul." 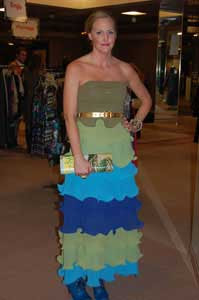 Once the hour-long black tie dinner with the accompanying Tadashi runway fashion show was over, everyone rushed over to the after-party/the sale itself (and unofficial kick-off party) at a converted Mays-Robinson department where the real action is.

A sale so glittering that even designers themselves shop here for their friends and family. With an open bar and trays of hors d'oeuvre coursing through the crowd, this is the real party where Beverly Hills socialites, Hollywood celebrities and everyday folks mingle together with a dancing Hello Kitty. 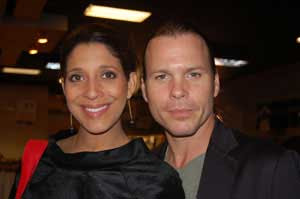 Comedian Judy Tenuta enjoyed that night festivities, hanging out at the Barbie Lounge.

What Project Angel Food has steadily accomplished for 16 years straight, is take a usually gloomy matter, suffering and dying from illness by offering care, sympathy, and dignity by celebrating life through concerts, bashes, and their famous and very generous 50%-70%-80%-90% Off Divine Design Sale. All these makes Project Angel Food self-efficient, free from government intrusion.

This is a great occasion to showcase Hollywood, fashion, and entertainment at its best, where the best off give to the worst off.


Posted by thearriviste at 9:37 AM