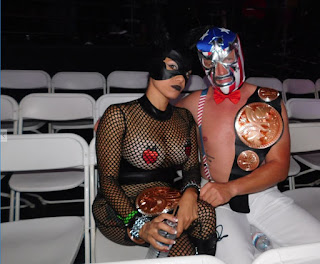 They say that Halloween or All Hallow's Eve is when all the "freaks" come out in night.
That's as ignorant, "Muggles" response to outliers, the insular culturists, and the die-hards who keep the locality's history and culture alive....say Lucha VaVoom.

It's been growing into a Los Angeles insider tradition, especially for Halloween, since 2002. 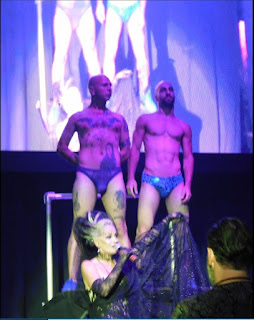 How does it work? The burlesque performers are the openers, the closers, and the intermission acts while the wrestlers take a much-needed break.

Now, these burlesque performers are the top-of-the line.  Siobhan Fahey (Bananarama, Shakespeare's Sister) of her new collaboration with Mexico's TITAN, opened the show. 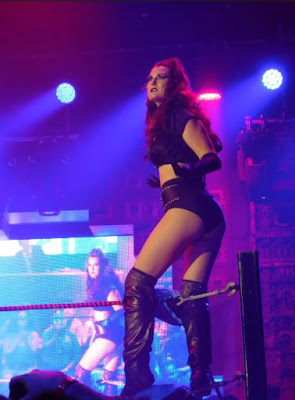 This two hours show got it's first wrestling round with a mixed-gender duos battling it in a good-ole-fashion "good vs. evil." 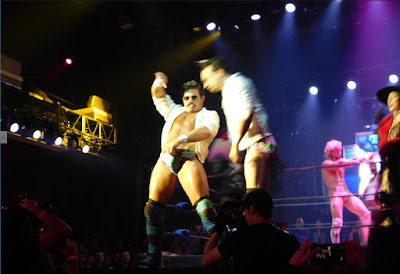 The elemental "Good vs. Evil" has evolved into ethnic clichés satire on vacationing Americans, "gringos," versus the stereotypical "dirty Mexican."

Mind you, like any slick performance wrestling, this is pure stunt work.  The wrestlers make sure they land on the band of their shoulder blades, not the back of their necks, before they roll back up.

They leap and flip and the more advanced flips are standard and heavily choreographed for their own safety and the audience's entertainment.

Warning, this second round of ethnic clichés did got nasty, that the audience flinched away for certain aspects.

The advisory screening by Peaches, warned folks not to puke and when security screams "Get the fuck out," you really get the hell out...why? 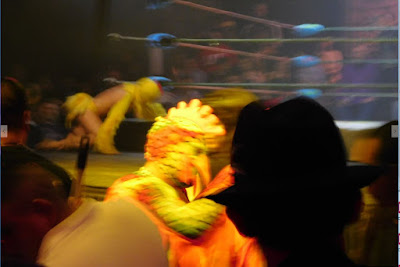 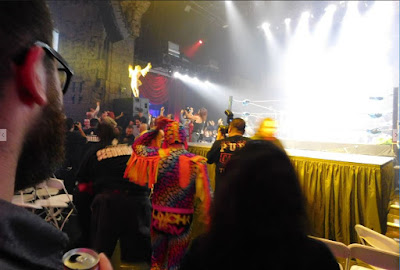 Lil' Chicken is a real-life Angry Bird.  That tiny but tough powerball was flipping wrestlers three-times his height and weight.

Lil' Chicken flinging into the audience, only to keep on fighting, is what the security mean when they scream, "Get the fuck out of the way!"

The chaotic craziness is what makes Lucha VaVoom special from the slicker, more mainstream WWE.

Within Mexican culture, the masked wrestlers are their idea of a masked super hero or master-mind villain.

If not, then the rest, like Lil' Chicken, are real-life cartoons animated in flesh and blood, injected with a lot of humor and vim and vigor, that gets the audience riled up and wild.

As a scribe who has witnessed and wrote about true Hollywood's love and admiration of traditional burlesque that had helped built the city and it's identity, this scribe has never seen and watched so much burlesque underneath one roof in one night.

No wonder, insiders in the know, buy their Lucha VaVoom tickets early then lined up, wrapping around the block, as their own Halloween treat.

The burlesque-as-intermission wasn't just paying homage to Fifties to Sixties' "Hollywood Exotica" that would make Ed Wood at home.  Some of the burlesque performers who dance and strip mid-air, doubling as flying aerialists, which is double risky, dangerous, and awe-inspiring. 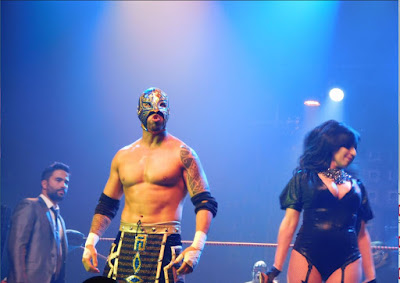 Like anything else, Lucha VaVoom saved the best for last.

The most buffed and muscular wrestlers with the slickest moves were saved for last.  Again, it was good versus evil, the 666 Demon and Hellboy versus an USC Trojan-like figure and a gorgeous figure in gold and navy blue velvet.

These wrestlers were different.  When they stage-dived into the audience was at whole other level.  The audience parted like the Red Sea when these full-grown, bodybuilder-sque wrestler bounced ringside where their fans sat a few seconds ago.

One of the wrestler climbed atop an amplifier then took a flying leap into the rival wrestler.  The wrestlers came out fine then continued the match back into the ring.  Audience went back to their seats.  But, a poor security guard got injured when he got mingled into wrestling melee.

Again many a times, they saved the best for last.

VIOLET CHACHKI wasn't just RuPaul's Drag Race Season 7 winner.  She wasn't just she performed burlesque.  Nope, these aren't adequate enough.  She was the cherry topping the sundae by stripping burlesque as an aerialist, stripping mid-air, spinning and a stripping.  Most mere mortals can't image this, much less do this.

They shut down Lucha VaVoom by flying it's freak flag with pride.  All it's burlesque performers party-ed on stage as a closing celebration.

Let mainstream Hollywood believe their releasing inner desires and freak by posing in scanty and silly costumes, dancing the night away in a over-crowd nightclub or a jam-packed street festival.

The real Halloween happens in the Mayan Theater, in Downtown Los Angeles, by Lucha VaVoom, a magical mish-mash of Mexican Freestyle Wrestling with tons of Classic Hollywood burlesque.

Hollyweird and proud of it.

Posted by thearriviste at 11:04 AM