Longines Los Angeles Masters Grand Slam Galloping into the US for the first time. 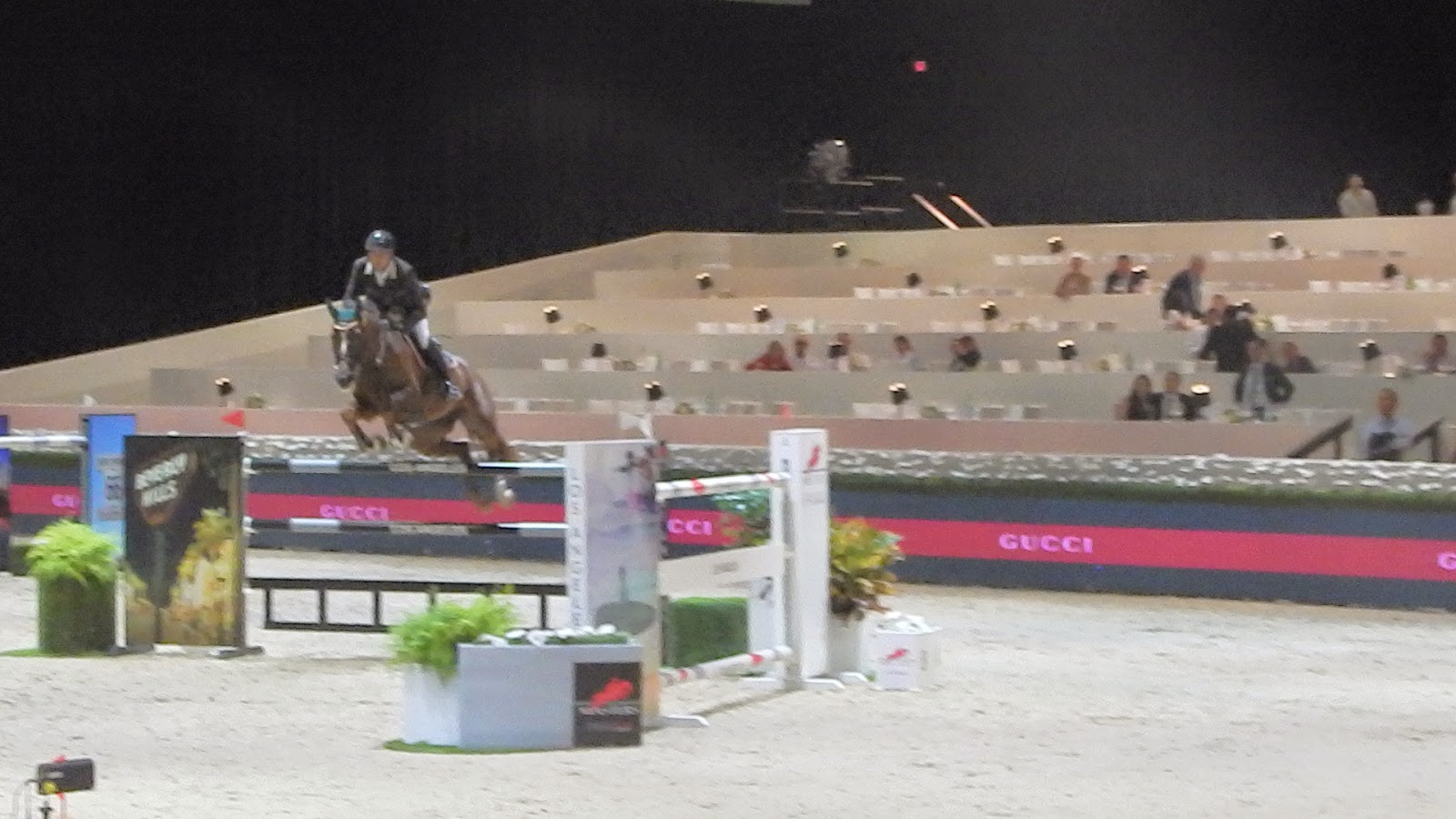 For Mayor Eric Garcetti, it's another jewel added to the crown, a month after Jay-Z's Made In America Musical Festival, again held in Downtown Los Angeles Convention Center...but why Los Angeles?  Why not Manhattan or New York?

A portion of the roomy Los Angeles Convention Center garage was easily and quickly converted into comfortable horse stalls for these million-dollar thoroughbreds.

As for animal rights lovers, don't worry.  These thoroughbreds were and are better taken care of than most human beings.  Truth be told, most of the horses are "Equine Olympians" who, along with their riders, have competed in multiple Olympic Summer Games, as recently as the 2012 London Olympics.  Not only are these equines are better pampered, they're in better shape than most humans..;and they smell better with a sweeter composition. 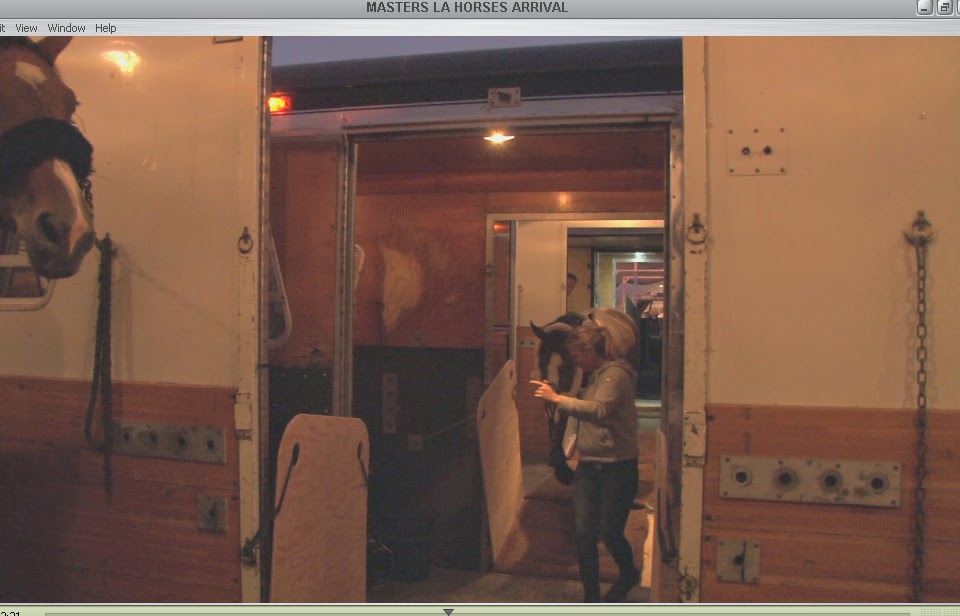 Their eleven-hour trans-Atlantic flight was a better trip than most human beings in cargo...i.e. coach class. 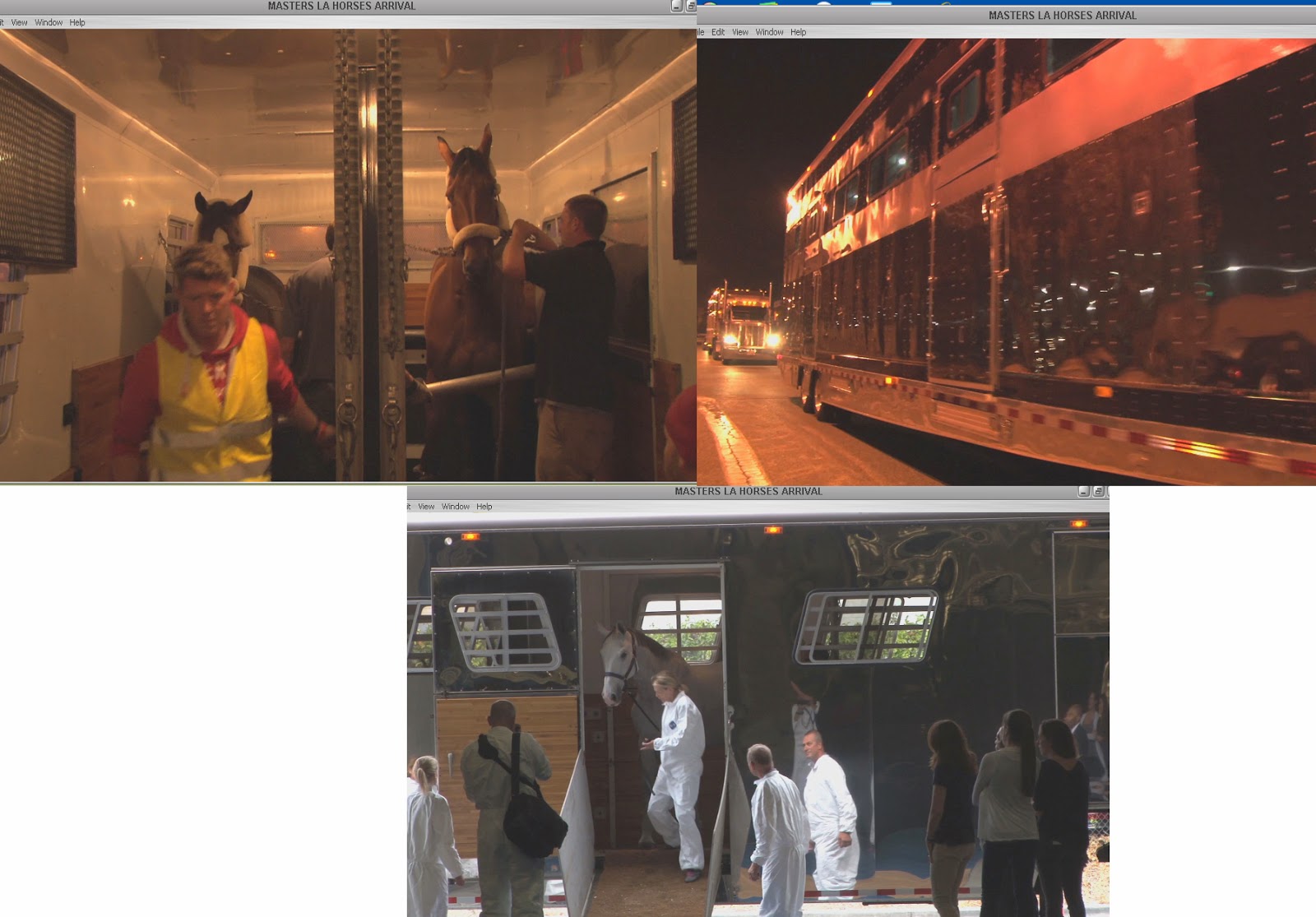 Nestled in cozy portable stalls and accompanied by a veterinarian and flown by a pilot and an airline that only specializes in flying thoroughbreds around the world, these million-dollar horses were gently guided into plush semi-trucks equipped to shield them from outside noise pollution to their equally plush stables at the LA Convention Center, in the middle of a silent night.

At 5:15am in the morning, 51 of  the 5* level international horses riding in the upcoming Longines Los Angeles Masters on September 25-28th, landed at LAX on one plane after an 11 hour flight from Liege airport in Belgium. After being unloaded their Boeing 777 Emirates Cargo plane, the athletes caravanned down the 405 and arrived at the Los Angeles Convention Center at approx. 7:15am. This is the first time the LACC has hosted a Show Jumping competition, and this was one of the largest transportation of horses in the world; horse racing transports 5-6 at a time.

At each step of the unloading from the jetliner at LAX to the unloading to their stables at LA Convention Center, handlers and groomers cradled these thoroughbreds from Belgium to Downtown LA.

Immediately upon their arrival, the 51 horses, most of which are Olympians, were escorted in the stables built out underneath the Convention Center and will remain in quarantine for 48 hours before uniting with their American competitors. The event itself is the first time in 30 years, since the 1984 Olympics, that the United States has hosted an equestrian event of this caliber.

Recognized by the FEI (Federation Equestre Internationale) and the USEF (United States Equestrian Federation) as a CSI 5* competition, the event will attract the best riders and horses from across the globe to compete for $1 million in prize winnings at the Los Angeles Convention Center

The humans had it rougher, on the opening day and night of the competition, the rider and the press were up and early.  Operations firing up at 5am in the morning each and every day.  Riders and media getting their photo identification badges taken at 7am.

Each day of competition started early.  The mornings for warm-ups in a separate warm-up ring in the lobby.  Not too far away was a bandstand and outlining the lobby was the gourmet buffet headed by a Belgian chef personally over-seeing the buffet.  The apples were free.  They're snacks for the horses but humans can munch on them too, https://www.tastemade.com/@the_arriviste/xe9XRY5GRI6FQ3vKgnRYgQ 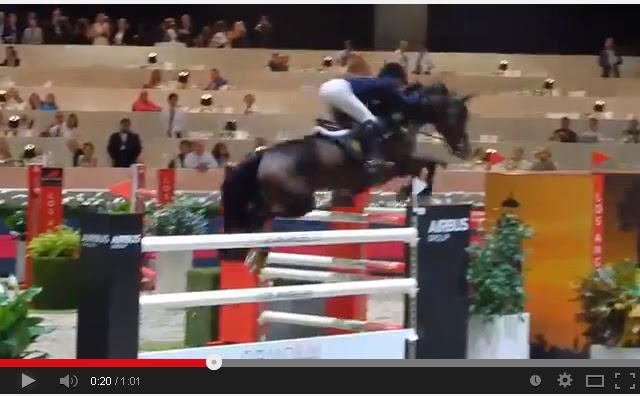 It wasn't all work and no play.  They saved the horse-play at night, the Opening Gala.  Since being "Hollywood,"  Longines Master Grand Slam LA brought out horse-loving celebrities and their professional equestrian daughters, such as Georgina Bloomberg and Hannah Selleck, Tom Selleck's daughter, above, who are also competing in the tournament. 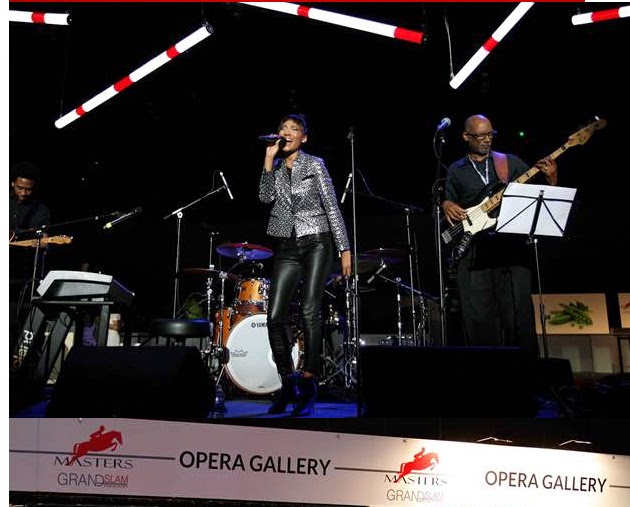 On the bandstand,  soul singer Judith Hill belted out tunes, a great merriment for the European and East Coaster riders. 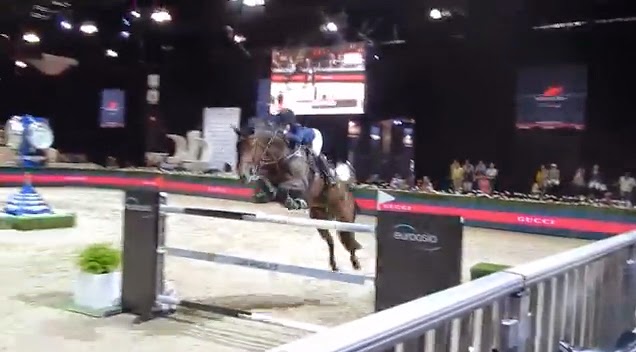 This scribe attended the second day and night of the tournament, the speed-show jumping challenge where the riders have to clear all the hurdles in the fastest time.

Jessica Rae Springsteen, Bruce Springsteen's daughter, placed 13th out of the 44 riders competing. Georgina Bloomberg competed too.  This international audience awed when the camera swung to the "Boss" and his wife, Patti Scialfa, watching their daughter from the sideline.

The winner was the petite but tough Swiss, Jane Richard Philips, Longines Ambassador of Elegance, took the top prize at the first edition of the Longines Speed Challenge in Los Angeles, competing the course on board Dieudonne de Guldenboom in a blistering 60.97 seconds.

Timing and precision: these are the keywords of this Masters Grand Slam class, now held on three continents.  Known as one of the fastest competitions of the circuit, riders faced a 15 obstacle (1.45m) course where every fault is penalized with two seconds instead of four as usual in common speed classes.
Horse-loving celebrities, such as Bo Derek, watched 21st rider in the ring, Jane took the lead with an incredible time of 60.97 seconds, two and an half seconds faster than Dutchman Jur Vrieling and Zavall VDL who were leading the class so far: “I can tell you, I was very nervous,” said Jane. “I was convinced that many riders would go faster. My horse showed me that he wanted to go very fast and I tried to do my best. I kept going quick during the whole course knowing that my horse could do it.” It worked out, although Belgium’s Constant van Paesschen and Citizenguard Million Dreams are usually very fast… “But I wanted to be a gentleman today (laughs)… No, I am joking,” said Constant.
“I also really tried my very best and my horse did jump super,” said Olympic Champion Steve Guerdat, who placed third in the event on top of Albfuehren's Memphis. “There was nothing to do to beat Jane today,” he said. “When I was in the lead, I never thought that I would stay on the platform”. Last to go, U.S. rider Kent Farrington (Blue Angel) could have changed this podium. Keeping the crowd in suspense, Kent had the fastest time until a last second fault on the final fence.

Most sports have cheerleaders or singers as half-time entertainment, not Longines.
Flown directly from North Paris, France,  the audience were treated to the very Victorian and very ladylike but no less soft, equestrian artist Clémence Faivre, who entertained the audience in the age-old dressage with her pony, Romeo, who she later performed with in addition to her horses Adagio and Gotan.  Horse fanatics consider this "Equestrian Ballet."
The 4 days and 3 nights tournament was broadcasted to over 300 million households across 100 countries, and live streamed to 800 million viewers. Broadcast partners include FOX Sports and HRTV, the Network for Horse Sports, EUROSPORT, EQUIDIA, Horse and Country, GLOBO, TVB (Hong Kong), FOX Sports Asia, and EUROSPORT Asia. A full broadcast schedule can be found at:
http://www.mastersgrandslam.com/en/longines_los_angeles_masters/program/tv_schedule

The Longines Master Grand Slam really ramped up the competition, the tournament, and the challenges for its Los Angeles/American edition.

In the third day of competition, Bill and Melinda Gates, Bruce Springsteen and Patti Scialfa, Alfre Woodard, Andre Agassi and Steffi Graf, Paige Johnson, Janice Dickinson, Jimmy Burrows, Chin Han, Jeremy Sisto, and Wilmer Valderrama watched the best American riders challenged the "rest of the world's" top riders in the Battle of the Nations, inspired by the famous Ryder Cup in Golf. The battle took place in two rounds on a 1.55 m course designed by Belgian Luc Musette. The first round determined the sixteen riders to come back for the second round, representing the top 8 riders for each team   Five countries were represented against the USA, France the most represented nation, followed by the Netherlands with two representatives, Belgium, Switzerland and Egypt with the spectacular Nayel Nassar who finished in second place of the individual ranking with his Hanoverian horse Lordan.

Kent Farrington, ranked 3 in the world, took home the win for Team USA, finishing the jump off aboard Blue Angel in just 39.54 seconds. France’s Kevin Staut on top of Oh d’Eole placed third.
Sunday was coming into the home stretch, it was only day and the last day of competition, much to the relief to the exhausted horses and their riders.
Riders' prowess prowl to the very end when eighteen-year-old Belgian rider, Jos Verlooy, taking the top prize in the Longines Grand Prix, the most prestigious class of the four-day competition. Verlooy emerged the winner with a timing of 38.11 seconds stating calmly, “It’s a great feeling.” 41 world-class riders participated in the Grand Prix with a prize of $475,000.
Touches of Hollywood glamour shown through in the jump designs, creating a spectacular first Masters Grand Slam atmosphere at the LA Convention Center. The first thirteen riders were unable to clear the thirteenth obstacle without a penalty, but the rising Belgian star gave an adrenaline packed performance, jumping a perfect flawless course riding Domino.
“My horse jumped super. I had already a good feeling in the first round,” Verlooy stated during a press conference following the prize giving ceremony. “The jump-off worked out exactly as I wanted. The idea was actually to put the pressure on the rest of the field. But when Steve [Guerdat] came in, I was very nervous. He’s one of the best riders in the world and it’s super for me that I could be first and he second… Sorry Steve!”
Second Runner-Up Steve Guerdat then chimed in with, “Albfuehren's Paille, my mare, is very new and it was very difficult to go faster. We only did three jump-offs together so far. It’s only our fourth big class. Today, it was still too soon to beat Jos. He did a great job and he absolutely deserved the win. I am satisfied with my second place and I am not thinking about what I could have done different today but just about how to work and make it different next time.”
Third Runner-Up, Georgina Bloomberg’s strategy ensured a clear round. “My plan with Juvina was a little bit different because she’s not the quickest and I usually go for a double-clear. So my plan was to be efficient and go clear,” Bloomberg said before father, former Mayor Michael Bloomberg came over to give his daughter a congratulatory kiss on the cheek.
A sold out crowd included notable attendees like Angelica and Danny Huston, James Caan, Malin Akerman, Robert L. Johnson, Bruce Springsteen and Patti Scialfa, Alex Newell, Alison Sweeney, Arielle Kebbel, Dave Caruso, and many more.
With the culmination of Sunday’s Grand Prix, the Masters Grand Slam will now head to Paris. The City of Light will again host the best riders in the world with the Gucci Paris Masters on December 4-7, 2014 giving fans and spectators alike four more days of top-class equestrian sport and entertaining show.

Posted by thearriviste at 11:47 AM