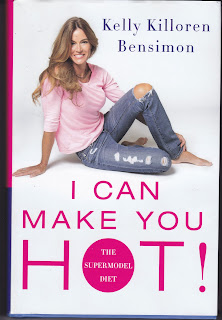 On the day before her birthday, it is a honor to speak with Kelly Killoren Bensimon , one of the stars of “The Real Housewives of New York,” on her recent self-improvement book, “I Can Make You Hot!”

Before that, she was well-known as an Elle Magazine model.


What people very rarely know is that she was a Literature and Writing major juggling her modeling career at Columbia University who grew up as a competitive swimmer in the Midwest.


After experiencing an overwhelming positive feedback from being a “The Real Housewives of New York” star then being besieged by fans and viewers asking about her fashion, makeup, health, and beauty to the point she had to put out lifestyle videos in hyperspace, she felt it was time to encapsulate everything into a tidy but meaty book that make any woman desirable in her own skin, “I Can Make You Hot!”


The basis of her lifestyle book is based on her Midwestern upbringing and her childhood years swimming competitively and how they carried over into her presence as a mother of two daughters and a busy lifestyle expert/style author and columnist.


Particularly as a mom, she wants young girls to respect their bodies through health and nutrition and exercise. But as a former model, she wants women to relax a little bit and enjoy life in order to treat your body and brain well. Kelly spells “diet” as “die” with a “t.” Recounting her modeling years, she commented on the difficulties on subsisting on extreme dieting for quick weight loss and how it affected her mentality and job, concluding that all-or-nothing dieting doesn’t do anyone good in the end.


Living a well-balanced life does. For relief to readers everywhere, she even tossed in a quick and easy and very affordable cocktail recipe where you can shake Crystal Light, water, and a shot of vodka for a low-calorie vodka shot with a hint of vitamins and flavor. No guilt here.


She even respects her cravings for Gummi bears and jelly beans, bringing her back to the days when her swim coach used to feed her powdered Jell-O as an energy boost before meets. But, she does make up for it by being a food dehydrator junkie, making all-natural chewy dried berries and fruit for her and the kids to snack on.


Once the cravings are fulfilled and done, she goes into listing delicious but clean-burning recipes that fuel the body with necessary protein and carbohydrates.


“Treat your body as a Ferrari, not as a rental car.”


What is really insightful is how she dealt with her own insecurities and the pressure of being on a reality television show. Kelly Killoren Bensimon is human, too.


Reaching back to what her swim coach has told her, “Swim Your Own Race.” Compete against yourself; make yourself the best that you can be but never against others. That’s pointless. 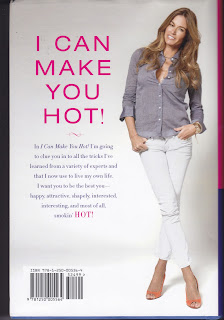 Boomeranging back to being a mother, she remembered the stress of losing “those ten pounds” as an emerging model at sixteen. Sixteen year-olds have enough drama as it is. The last thing they need is to worry about dropping “those ten pounds.” Writing this book is about self-esteem and protecting one’s body image against society’s exceptions. She noticed that every guy she been with never cared about “those ten pounds.” These men paid attention to her spirits and interests. This is what Kelly wants her readers to know, to be “hot” is to enjoy life, pursue your interests, work with your body, and live life well. To men, this is “hot.”

Improving your life or making yourself hot is a life-long journey.


She has a unique take on vanity. Not of the narcissism kind but of self-protection from those with ulterior motives …


“Vanity is that shield against bad people. You may have fun with them but they’ll still gonna hurt you.” For her, vanity is pursuing your interests and drive while finding some genuine friends that can support you through the rough patches.


Being a Midwestern girl with compassion never hurts either. She was concerned when she learned this writer underwent dental surgery yet was thrilled that this writer used the recuperating time reading her book from front to back, twice.


“I Can Make You Hot!” is not a “die-t” book but a self-improvement blueprint to make yourself the best that you can be.

Posted by thearriviste at 11:32 AM

Love this! Her quotes are very motivating. Thanks for sharing, Laura!