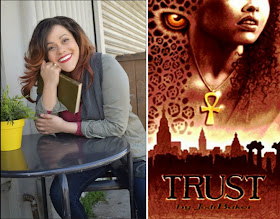 Author, Jodi Baker & her first in "Between the Lions" Series, "Trust."

Once America caught J.K. Rowling's "Harry Potter Fever" rich in British folklore, Americans have been trying to distill that elusive genie in the bottle in their own uniquely American flavor...and didn't catch on, until now...

An unassuming grad student volunteering as a docent at the Metropolitan Museum of Art, Jodi Baker never set out to be a great story-teller or a myth-weaver. Nope.

However, Summers trying to keep museum visitors, her fellow docents, and herself constantly alive and interested about tours and exhibits, (that could easily become routine) by changing, switching, and reviving tour stops among the Met's hallowed, marble halls, proved to be fertile grounds for Jodi's intellect and imagination.

By being in-depth and knowledgeable to keep her museum tours fresh and intriguing, Jodi Baker unwittingly conjured a 8-part book series,"Between the Lions" Series in honor of the two marble lions keeping guard at the foot steps of the Metropolitan Museum of Arts.

Using the real-life and tragic Hypatia, one of the very few and extremely rare woman mathematician, astronomer, and philosopher in Ancient Alexandria Egypt, as a foundation for the protagonist, Anna in the first of the 8-part series, "Trust."

The title, "Trust," is an apt way to start off this urban mythology, Young Adult series that is also a coming-of-age journey for Anna.

Working as a docent, Jodi discovered a variety of cultures and their mythology and wants to give them their equal dues.  She neatly divided them into "Eight Libraries," hence the eight-part series.

In the "Between the Lions" series, the protagionist, Anna, is sent on this journey to discover and unite all "8 Libraries" before the antagonists beat her to them and used them for evil.

In the race to beat the antagonists, this is the launch pad that Anna sent to uncover her lineage, heritage, and family secrets that bestows her with super-natural gifts and talents.  She just has to learn to transform them into skills, very much in line with Harry Potter's coming-of-age discoveries.

Of course, in any coming-of-age tale, this is the story of independence and emerging adulthood, striking out on one's course where Anna discovers love on the journey.

In keeping with the tradition of Hypatia, the main characters are very strong, very independent, very wealthy, and very powerful women who are the standard-bearers of New York High Society while secretively acting as the gate-keepers of knowledge that can be used to maintain the world or destroy it.

It is all up to Anna to navigate that elite, alternative world and discover then unite all "Eight Libraries" of the world from destruction.

If you want to delve deeper into Anna's journey and discover what are the "Eight Libraries of the World," you just have to get your feet wet in the first of the 8-part "Between the Lions" series, "Trust."