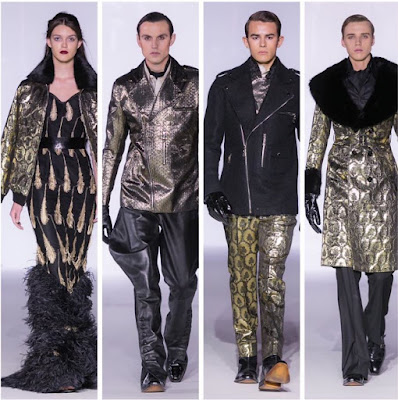 This scribe has always been thrilled to see New Yorker-turned-part-time Londoner, Malan Breton, whenever he's in town.

He may be an infrequent visitor but he always has a love affair with Tinsel Town, especially with Olde Hollywood.

He even, fittingly, premiered his documentary, "A Journey to Taiwan," http://www.ajourneytotaiwan.com/,  in Westwood, where the real premieres do happen.

There is a direct link with his ancestral homeland, Taiwan and the modern film noir film-maker, Wong Kar-Wai, and their adoration to Olde Hollywood Glamour and "can't-go-wrong" classic film noir.  The love of luxury and a romance of undulating sensuality.

Malan always has a romance with Tinsel Town of yore, which his love of stamped and foil metallic taffeta reigned supreme during 1930's Hollywood, when it hits its stride in voice recording with reflective tin-stamped, foiled silk...whether it be crepe or taffeta in satin weave...for better reflective lighting on the camera, thanks to legendary MGM studio designer, Adrian Gilbert. 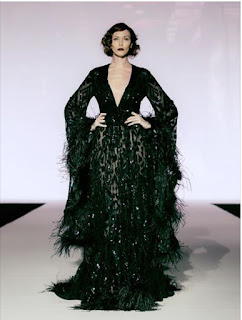 Even, Malan Breton opened his recent Style Week Los Angeles runway show with his take on the iconic MGM logo.

In addition to the Pre-Hayes Code 1930's when Old Hollywood's imagination used to run wild, Adrian Gilbert's influential extravagant, draped evening gowns; hooded dresses; embroidered, padded evening jackets; and elegant suits, served as inspiration for Malan's Autumn/Winter 2017 collection.  The reflective nature of lame and foil and the glow of velvet, curving the body on a bias-cut, looks alluring on camera...forever for future generations to admire...which Malan brought onto the catwalk. 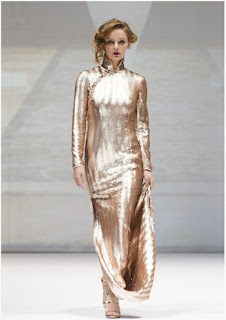 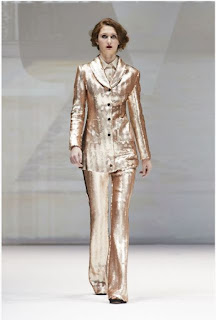 What people thought of as Hollywood's hey days were Adrian Gilbert's hey days, too, as MGM's ruling costume designer, from 1928 to 1939, where he put luxurious threads, weaves, and cuts to full-effect.  So desirable, knock-offs flew off the racks during the Depression, as ready-to-wear.  Hollywood studio costume designers were unheralded haute couture designers; and studio's costume departments were unsung ateliers.

Malan paid homage to Marlene Dietrich's sensual androgyny in this tux then Malan paid respect to... 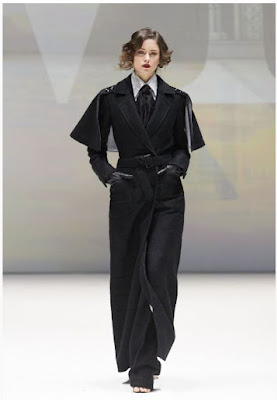 Adrian's sensual use of black lace and sequins in this hooded gown, another Adrian inspiration for Malan...

It was also fitting that Malan's Olde Hollywood homage came at the tail end of this recent Academy's Oscar Awards, where Hollywood's A-List pay respect in their finest.  An ideal market for his classic luxury and elegant refinement, especially aiming towards to emerging female and male starlets, just hitting the red carpet. 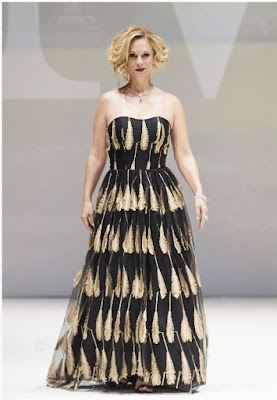 Malan is also splitting his time between New York and London.

Incorporating Adrian's patent leather in functionally classic trench coats and motor jackets as the tuxedo jacket, comes in handy for London's inclement weather.  This is where film noir androgynous sensuality comes in handy, look sexy and sleek while wet in dark and stormy weather. 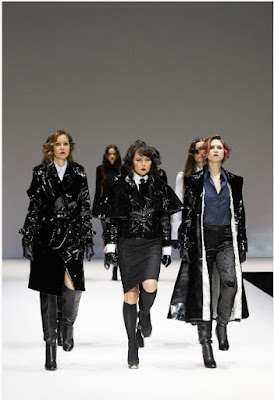 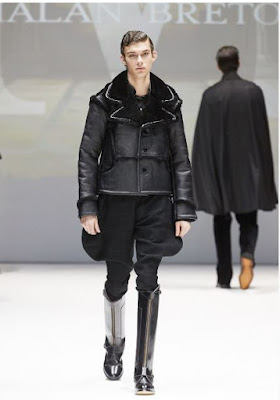 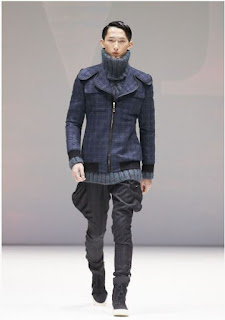 This scribe swore there was a lone denim outfit in a peplum jacket and denim riding leggings with knee-high black patent leather boots.  That outfit this scribe will wear in a minute, fresh off the runway. 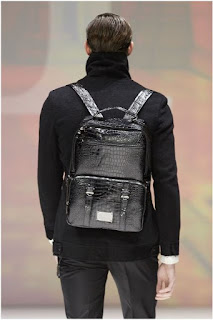 Malan is also growing his business by, finally, designing accessories.  That moment when a designer morphs into a brand.  So happy for him. 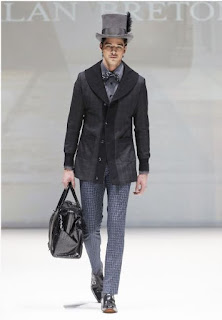 Another London allusion, a top hat and a shawl-collar cardigan in tartan pattern.  This scribe would "politely borrow" that cardigan and that tote bag.  It will make a very chic gym bag for this scribe.

Sure, there were spots of "Spring-Time" London and English love of gardening with... 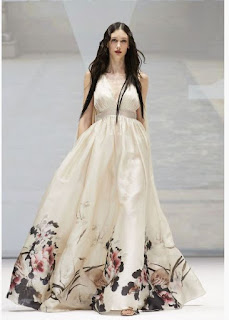 Floral embroidery at the hem... 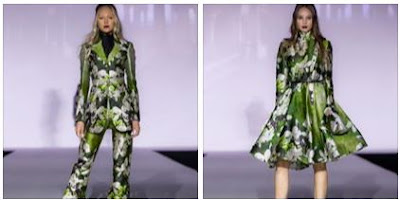 and bold, greenery of lush vegetation, blooming ripe in the English countryside, after the rainstorm.  These spot allude to Malan's growing his business in London, another homage. 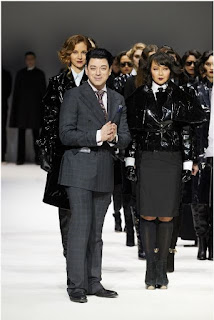 But, Malan Breton's love of Old Hollywood and admiration of Adrian Gilbert were too strong a pull not to be ignored.  Still, what an inspiration.  Especially, when you're showing to Young Hollywood that needs to step up their style game on the red carpet, when this generation of Young Hollywood considers, being shot in comfy sweats and jeans by paparazzi, fashion.

Paraphasing the only American editor of French Vogue, that is style street, not fashion.

Fashion has "context," a background, a meaning, culture, and history.  This is what Malan Breton has consistently provided in his designs, especially when he gets acquainted with Hollywood; and it's constant flow of young industry players ebbing and flowing.

With him incorporating functional British ware of trench coats and motorcycle and motor-cross jackets and riding/rain boots in hip, shiny patent black leather, he's proving to Young Hollywood, that comfortable, daily sportswear doesn't have to be sloppy and slovenly to functional.  It can be utilitarian and sporty and chic and hip, all at once...and paparazzi ready.

The way Olde Hollywood studios and their designers used to do, outfitting their stars in daily haute ready-to-wear while running errands, for fans and fan magazines.

Mr. Breton is trying to return that Old Hollywood Glamour to up the ante for today's stars.

This scribe is cheering him on...

Posted by thearriviste at 1:36 PM

New Diet Taps into Revolutionary Plan to Help Dieters Get Rid Of 15 Pounds in Only 21 Days!